Henri Craemer | The Streets of Pietralunga, Stage 11 Concluded
An account of the end of Stage 11 on the Way of St Francis plus a brief look at the history of Pietralunga.
Pietralunga, hiking, history, pilgrimage, World War II, World War I, Italy, dining
16016
post-template-default,single,single-post,postid-16016,single-format-standard,qode-quick-links-1.0,ajax_fade,page_not_loaded,,qode-theme-ver-11.0,qode-theme-bridge,wpb-js-composer js-comp-ver-5.1,vc_responsive 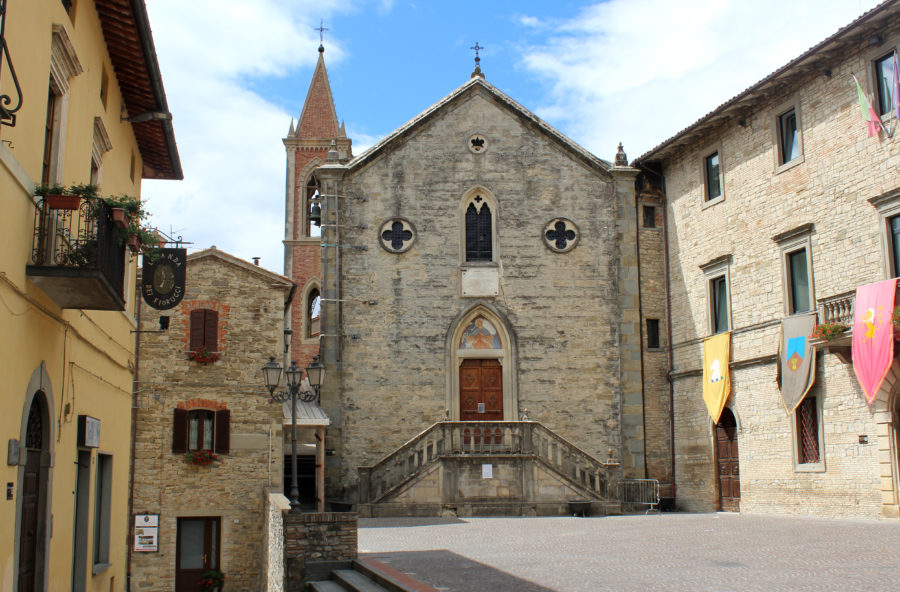 It’s just after 13:30 on 3 September 2017. Stage 11 of the Way of St Francis ends here, at the main Piazza of Pietralunga after a steep climb. The old part of the town has certainly maintained its medieval character. What strikes me is how fresh this town looks in comparison to Città di Castello, in spite of being just as old. 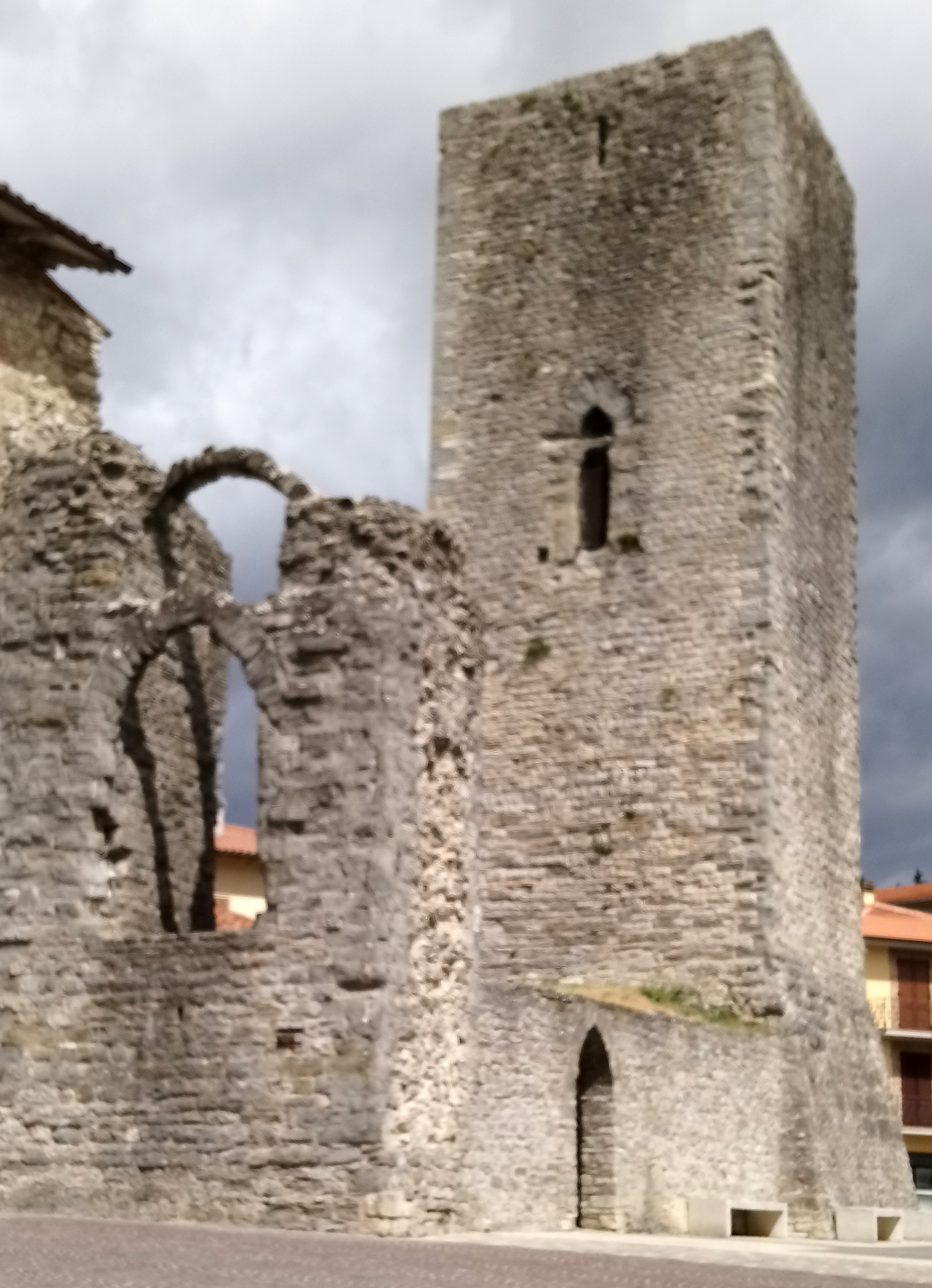 The pentagonal tower of the ruins of the Rocca Longobarda, an old Lombard fortress built in about the 8th century AD. (Photo: © Henri Craemer)

Priority one is to find a place to eat and rehydrate. We get to a quiet place overlooking the Carpinella Valley. Apart from us and a couple of French tourists, the place is empty. We rejuvenate ourselves with frizzante, to which Niels adds one of the local artisanal beers for himself. We decide to keep the 750 ml frizzante bottles because they are a perfect shape and size for our backpacks. Lunch is some of the best tagliatelle.

After lunch, we still have to cross the valley to get to our Agriturismo. As usual, Niels has the instructions sent him by Caminoways. The walk shouldn’t take longer than about 20 – 30 minutes. We set off, hiking down the hill. What a beautiful place to live in, I think to myself as we pass the houses on both sides of the street. They may be old, but they’re well-kept with stunning little gardens.

In the valley, we come to a crossroad. We take the one we think will shortly lead us to our accommodation. The road takes us around the spur of a hill into a newer part of the town. Still no sign of our destination. Time marches on.

The trouble with perception is that it creates expectation. When the expectation is not fulfilled, it plays havoc with mind and body. I begin to suffer from the are-we-there-yet attitude, my stamina and patience failing, frustration growing. We seem to be getting nowhere. So, it’s out with the GPS. For the first time that is no help. 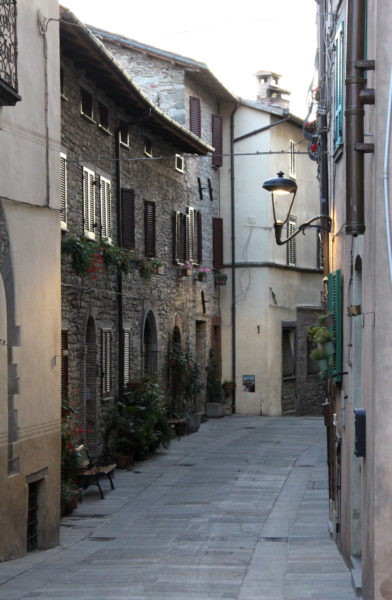 An Italian mamma sends us back the way we came when we ask for directions. Her Italian is far from clear, but we follow her gesturing. We hit a few dead ends. We ask a man out for a Sunday afternoon walk with his baby in a pushchair. He speaks English. Hallelujah! He can’t help us because he’s a visitor too, but he phones his dad who lives in town. The directions are translated and we’re on our way.

It turns out we were less than five minutes away from our Agriturismo when we took the wrong turning. Our cottage is a beautiful little place. Niels and I have separate rooms.

As we are settling in, we see Niels’ backpack has got wet as it rested on a wet couch. When we point out the problem to the innkeeper. She is distraught. She insists on taking us into town when we’re ready and bringing us back after supper.

Around 19:00 the sun is still high enough when we get into town. The clouds have almost totally cleared. A nearly full moon is rising. There is enough time to take photos of yet another stunning little Italian town.

We have supper at a place recommended by the innkeeper – another sumptuous dining experience in Italy. When Niels tries to pay for the meal, we find out it’s on the house. We are grateful for this kindness. It wouldn’t surprise me if this favour was granted because we are pilgrims.

Pietralunga has a very long history of pilgrims passing through. One such an example is Giovanni di Lorenzo of Picardie (France). In 1334 he was on a pilgrimage to Lucca to view the Holy Face. After being falsely accused of killing a local man he was set to be executed. On the gallows, a miracle happened. He invoked the Holy Face of Lucca, and the blade falling on his neck turned, sparing his life. The event is commemorated annually in August.

While the via Francigena di San Francesco passes through the town, I don’t find any record of specific events related to the life of St Francis in connection with the town.

The town’s history goes back to Roman times. There are several ruins of buildings and remains of Roman roads in the vicinity to attest to this. Pietralunga stands on an important strategic junction of routes. 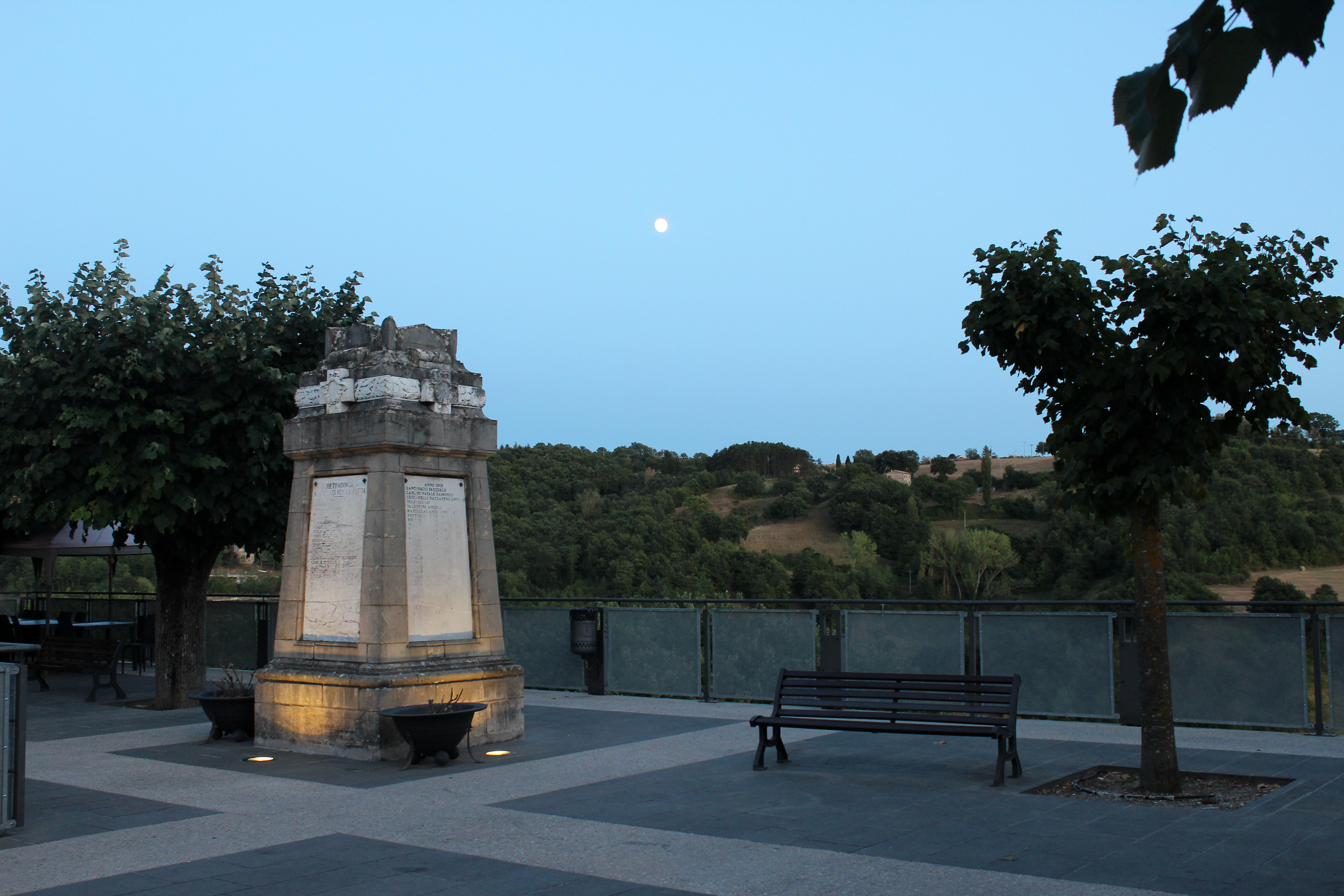 The monument in the gardens of the main square to commemorate the citizens from Pietralunga who lost their lives during World War I (1915-1918). (Photo: © Henri Craemer)

After the sacking by the Goths, it was rebuilt between the 6th and 8th centuries AD. It withstood many attempts at conquest until the Bracceschi and a troop of mercenaries under Nicholas Stella conquered the city in 1400s AD. It remained under Papal rule until it became part of a unified Italy in 1861.

The town featured in both World Wars. During World War II Pietralunga was an important centre of partisan activity and anti-fascist resistance. On 7 May 1944, it suffered an atrocity. Seven young men were executed in the town square, presumably for being partisans. During the time that followed, the Allies and Partisans faced off with Fascist-Nazi forces in bloody clashes until the area was liberated on 29 July 1944.

Despite all the past turmoil, the town seems quietly prosperous.