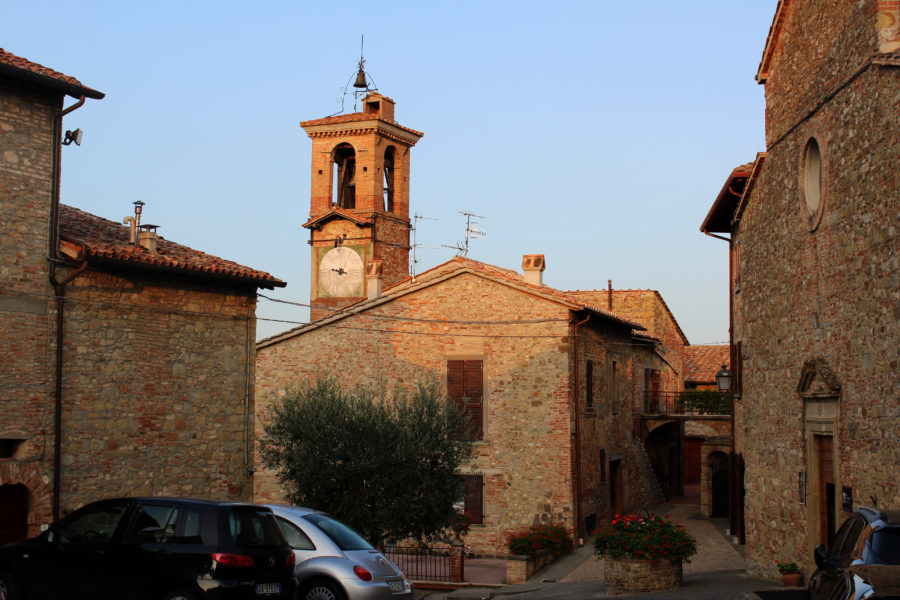 The sign welcoming us to Citerna is not mentioned in Sandy Brown’s book. Technically we are still lost. Only when we reach the Convento Soccolante do we know our detour is over. However, there is a steep hill before we get to the wall which forms part of the city’s ancient fortifications. There we have some water from the fountain and regain strength.

We reach a viewpoint overlooking the Upper Tiber Valley. Citerna offers such spectacular views of the valley, that it’s impossible to take a picture that does it justice.

A bit further on, opposite the Piazza Scipione Scipioni, is a restaurant/bar. I drag myself into a seat next to Niels. I am drenched in sweat and practically inhale two frizzante. 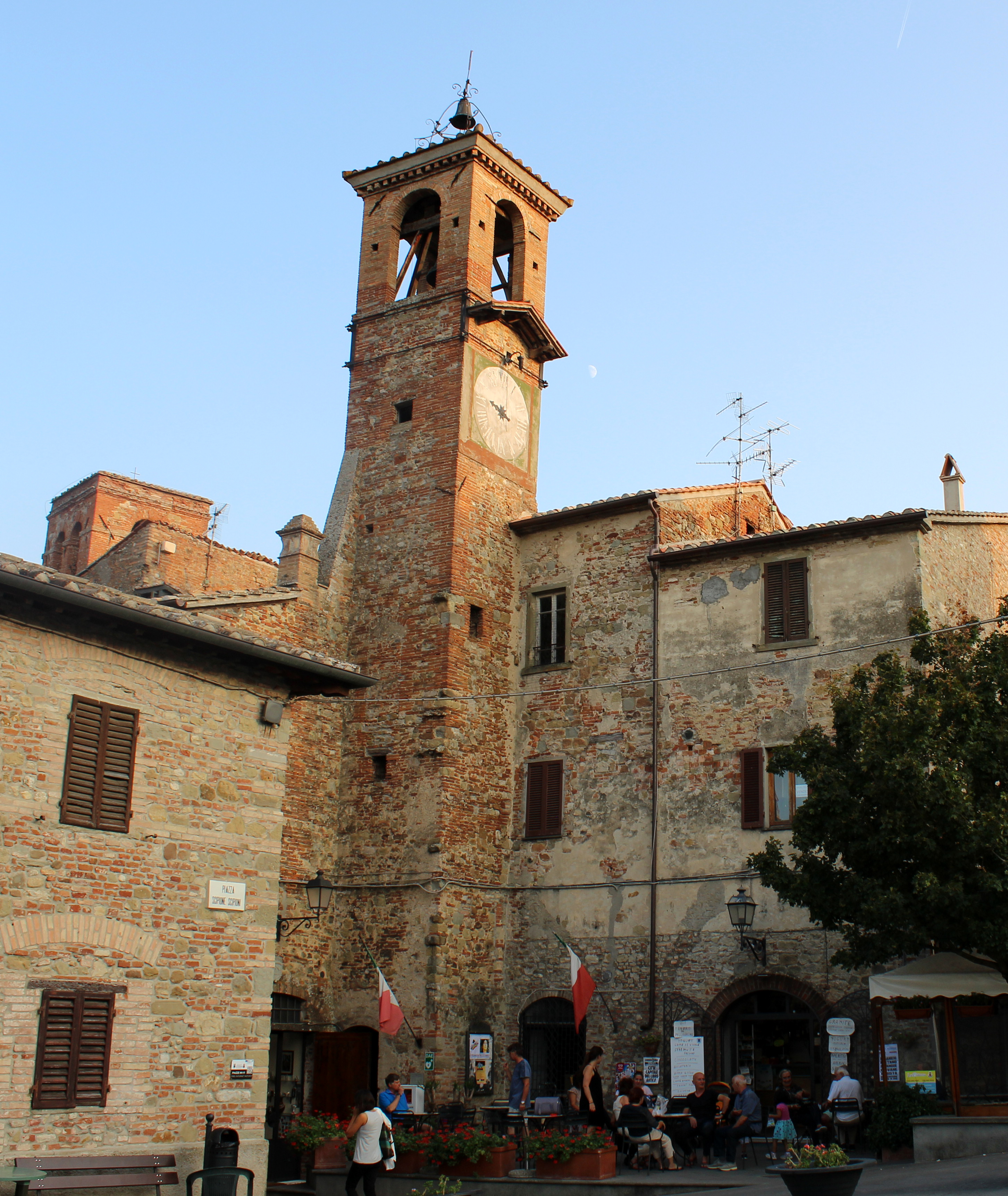 The restaurant/bar and clocktower from Piazza Scipione Scipioni. The very unique clock tower has a wooden mechanism, with original parts that still work. (Photo: © Henri Craemer)

At the table next to ours are a mixture of people. There is a man from Sicily (quite possibly a Mafia Don), a woman from Australia, and an Englishman who lives in Citerna. He is a travel writer who has also been to South Africa. We start talking, but Niels takes over and almost completely shuts me out of the conversation.

After that, we go to our agriturismo, Poggio Villa Fano, another 20-minute walk, downhill and steeply uphill. The mamma innkeeper is concerned as she welcomes us, commenting that we are “stanco*”. She brings us frizzante and birra*. We arrange that she’ll take us back into town once we’re ready. 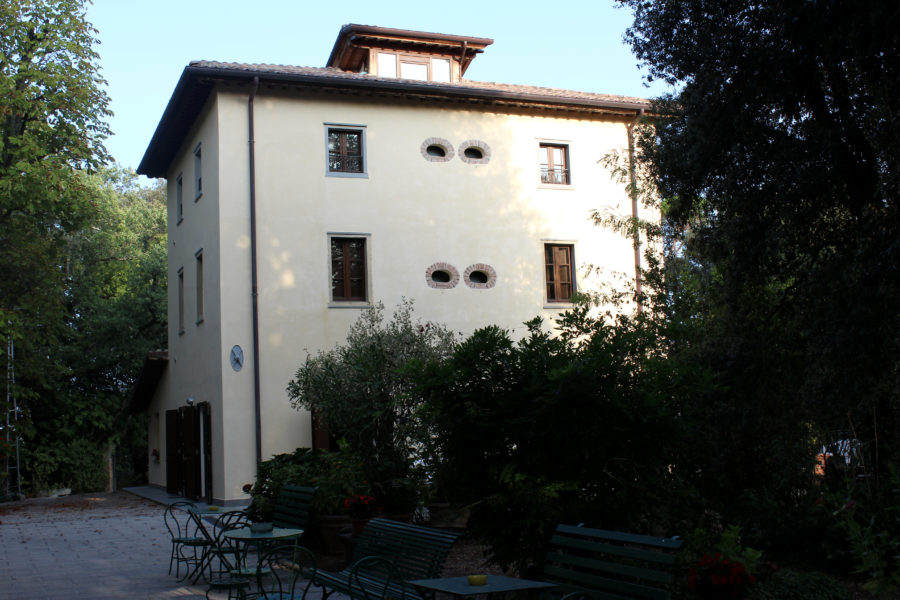 We settle in. Mamma innkeeper brings us a tray of goodies meant for breakfast – mostly bread snacks and pastry nosh. We return to Citerna in the late afternoon, the sun still high in the latish summer.

I still feel some tension between Niels and me as a result of our little detour.

“Your problem is that you need to look up,” Niels says. “I always see you looking down when I look back at you.”

I decide to keep quiet, even though I strongly disagree. If so, how could I notice the landscape in all its beauty? What I can’t deny, is that I need to pay more specific attention to my surroundings.

The Beautiful Small Town of Citerna

I decide to go on my own and take pictures of this stunningly beautiful little town. I walk the full length of the main street of the town. Having recovered, and without a backpack, the distance feels a lot shorter. The imposing fortress walls attest to its strategic importance. 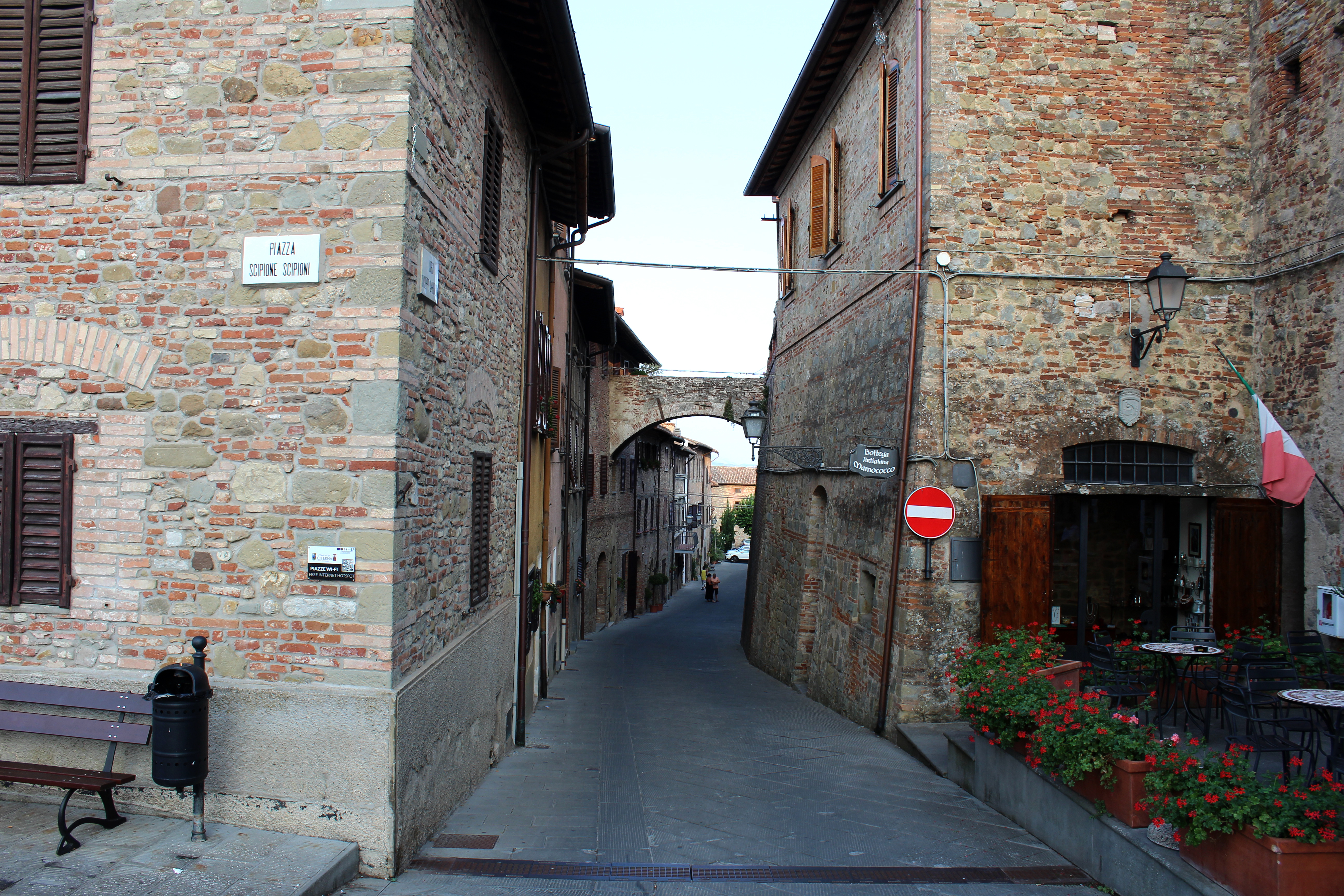 The town has Etruscan and Roman origins, then known as Civitas Sobariae. It was mainly built in the 13th and 14th centuries. During an earthquake in 1917 and World War II, it was badly damaged but restored to maintain its character.

The Peace and Healing of Chiesa San Michele Arcangelo

I’m drawn to a building that looks totally unimposing. Entering Chiesa San Michele Arcangelo*, I am overwhelmed by a sense of peace. The feeling is very similar to the Benedictine chapel of Camaldoli. The shutter clatters as I take photos. 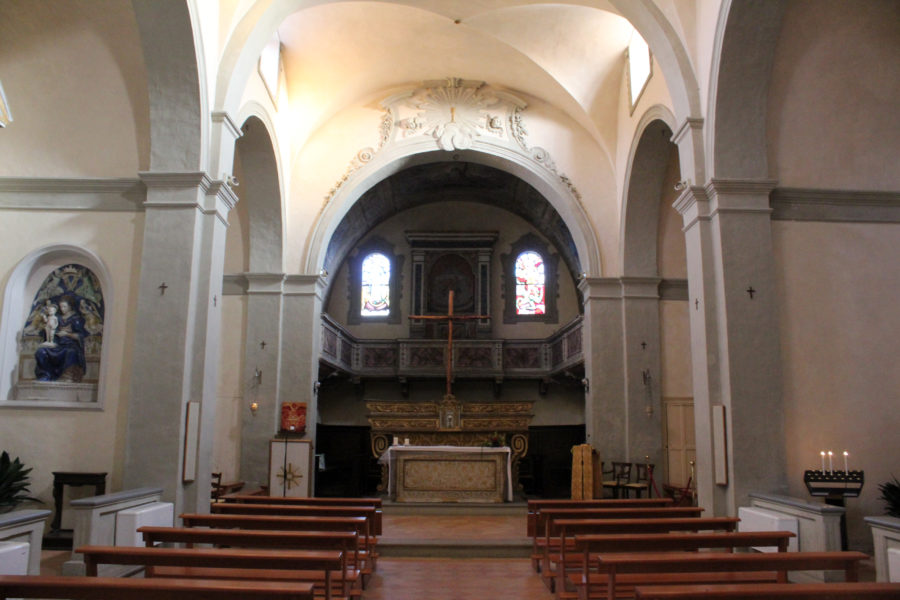 Then I just sit. It takes me a while to make peace with myself as I mull over the day’s events. It is what it is.

In spite of not being Roman Catholic, I feel welcome here. It is both a sense of higher awareness and of fellowship with humanity in general.

Even though my background is Christian, I sometimes wonder how Christian I actually am. In many ways, I have hammered at the doors of perception and awareness. This has lead me to acquire knowledge through studies of various schools of mysticism, as divergent as the work of Edgar Cayce and Kabballah.

One thing I’ve never doubted is the reality of God, so incredibly great and all-pervasive that He/She/It/They are beyond human comprehension. God is Love, the Pulse of Energy beyond any description of any religion or any set of human conceptualisations. 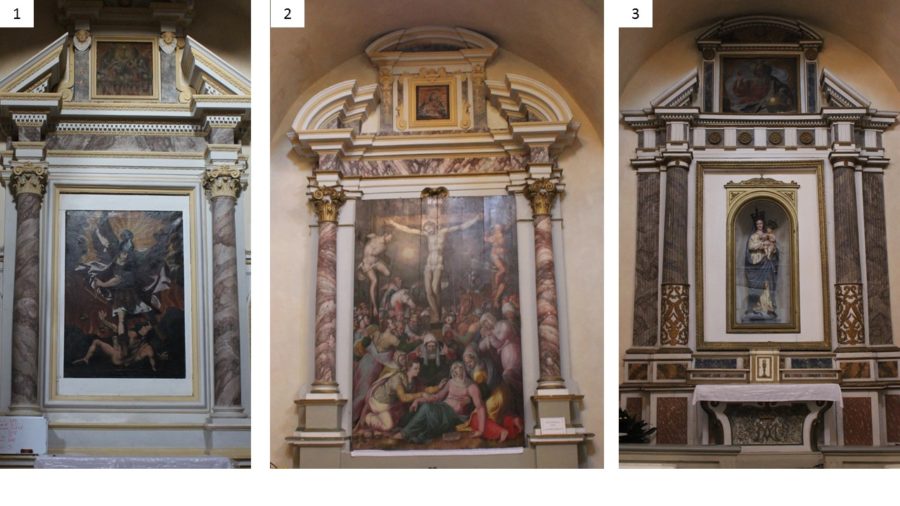 A selection of artwork from Chiesa San Michele Arcangelo: 1. San Michele Arcangelo from the 20th Century 2. Crucifixion; an oil on wood dated 1570, by the painter Niccolò Circignani, known as the Pomarancio. 3 Madonna with Child (XVI-XVII centuries), considered the work of Giovanni della Robbia. (Photo: © Henri Craemer)

I return and sit down with Niels. The English travel-writer returns. Again, I get shut out of the conversation in spite of trying to make a contribution. After a few attempts I let it go. Sometimes specific people need to connect on an emotional and spiritual level that goes beyond the content of words. They may not even be aware of this flow of energy themselves. It’s OK for my mind to follow its own track.

We miss out on supper because the little restaurant closes as Niels goes in to order food. I have severe cramp in my leg as we get up to return to our lodgings. Meditation, prayer, and sleep complete the process of healing. Things will be better in the morning.

*Translations from Italian to English