Henri Craemer | Stage 7, Part 2: In the Birthplace of Michelangelo
Caprese, the birthplace of Michelangelo, is a perfect place to take a break between stages on the St Francis Way. The account relates a visit to the museum housing the building where he was born as well as art exhibits from various times.
Buca di Michelangelo, Caprese, museum, Michelangelo Buonarroti, Michelangelo, Buonarroti, Madonna of Bruges, Giovanni Santini, Santini, St Francis Way, Art
15802
post-template-default,single,single-post,postid-15802,single-format-standard,qode-quick-links-1.0,ajax_fade,page_not_loaded,,qode-theme-ver-11.0,qode-theme-bridge,wpb-js-composer js-comp-ver-5.1,vc_responsive

27 Nov Stage 7, Part 2: In the Birthplace of Michelangelo

28 August 2017, after 15:00. Soon after settling into Albergo Buca di Michelangelo clouds start moving in. Until now we’ve been very fortunate to avoid rain, although it may well have brought welcome relief from the heat. The now familiar post-hike routine has not only become easier but also quicker.

In spite being bone weary from the day’s hike, I feel good. I pushed myself beyond what I’ve previously achieved.

As I’m getting ready to shower, Niels remarks on how much weight I’ve lost. “You are a mere shadow of your former self,” he says jokingly. My weight loss doesn’t totally surprise me, although I did not think myself as overweight at the outset.

By the time I’m done with this routine, a bit more than an hour has passed. He has already gone to look at the museum, housed in the original settlement of Caprese. It contains the house where Michelangelo Buonarroti was born. I regain my strength as I make notes of the photos I’ve taken on the way.

Before he returns I decide to go and have a look at the museum. As I go out, the clouds become thicker. I pass Niels as he returns. Both of us have recovered sufficiently to move about without doing the pilgrim shuffle.

The museum is housed in the fortress on the hill, overlooking the town and the valley. I pay my entrance fee. As a medieval settlement, it housed a number of families and the regional administration of the area. 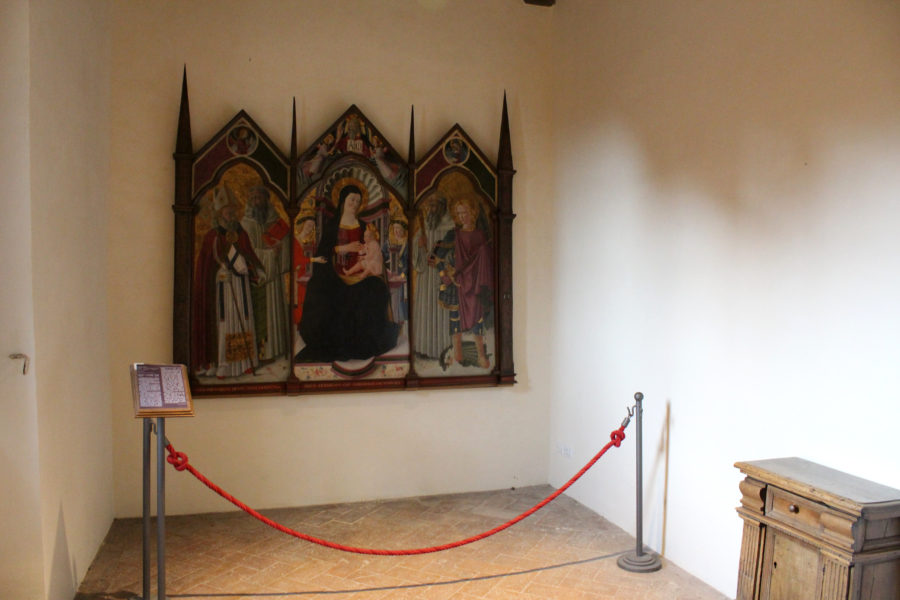 Michelangelo was born in this room. (Photo: © Henri Craemer)

The room where Michelangelo was born is in the building on the left, top floor, closest corner (Photo: © Henri Craemer)

Michelangelo was born in the upper section of one of the buildings. Going there, a very gentle intermittent rain brings relief from the heat of the day.

On the ground floor are a number of replicas of Michelangelo’s works. Most striking is the Madonna of Bruges. I go upstairs to the room where he was born. I’m struck by how bare it looks. Some ancient documents and handwritten records are also preserved in this museum. 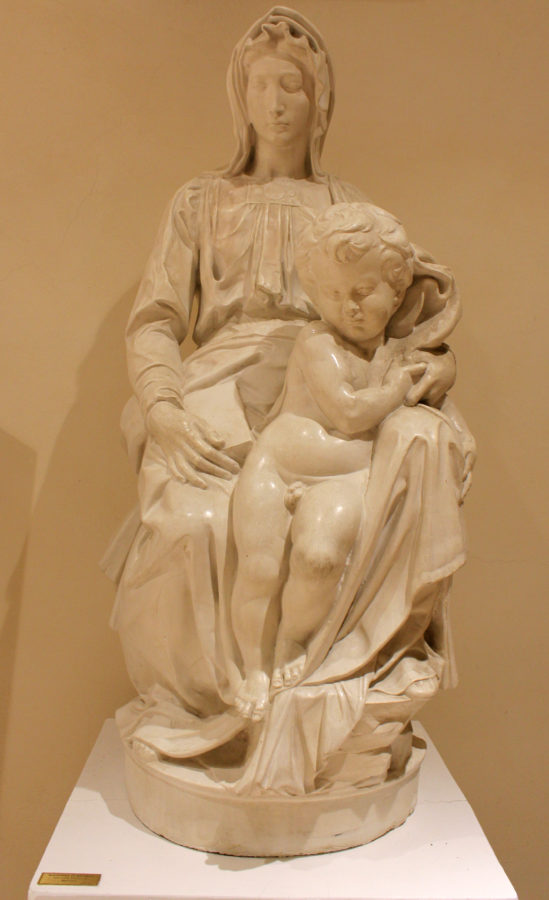 Replica of Madonna of Bruges by Michelangelo (Photo: © Henri Craemer)

The whole settlement has been converted to a museum and art gallery. It’s not only dedicated to the work of Michelangelo but also displays works of those who followed him. One of the areas has a display of contemporary art. One of the rooms houses an exhibition of another famous son of Caprese – Giovanni Santini. He was not only an artist but also a renowned astronomer and mathematician.

The top of the tower outside the main building offers spectacular views of the valley. I make haste in getting pictures before the rain makes it too difficult.

As I return to the Albergo the rain intensifies. I run for cover as I approach the entrance. I join Niels where he is busy having his regulation beer. The Italians are not known for their beers. Yet, apart from the well-known mass-produced brands, almost every place has its own artisanal beer. Although I haven’t drunk beer for decades, I am almost tempted.

I’ve walked in hotter days while on the St Francis Way. However, judging by my thirst, this one is a fair match for the hottest we’ve seen. I don’t know what the Italians put in their frizzante, but it kills a thirst like nothing else. 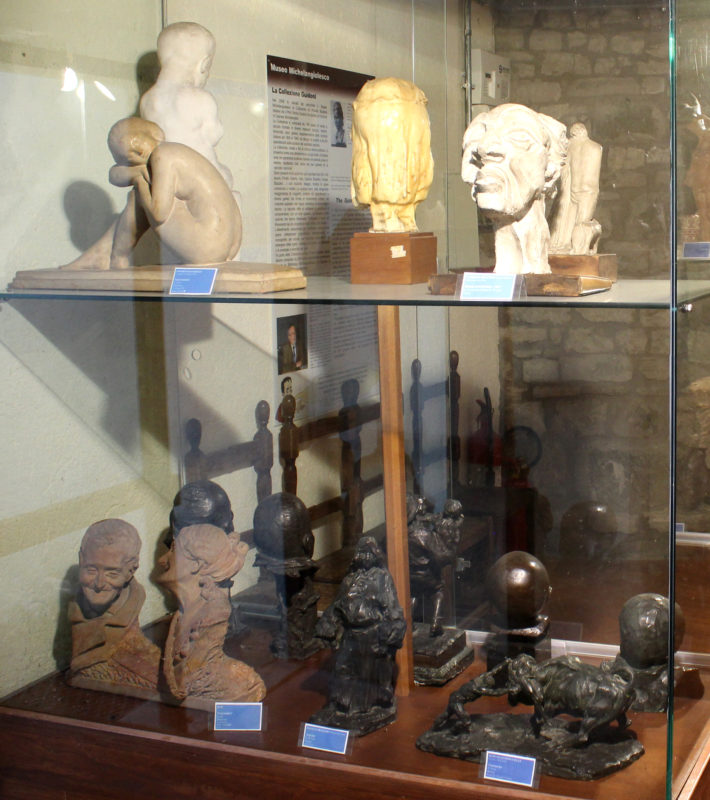 Items on exhibition in the Museum (Photo: © Henri Craemer)

Reflecting on the Day’s Walk

We talk a little about the day’s hiking.

“Why do you think so?” I am a bit surprised. It didn’t feel any easier than many of the previous days.

“You managed to keep up much better because you didn’t rest so much.”

Having pushed myself as hard as I could, I had not really noticed this. In spite of the difficulty of the walk today, I certainly enjoyed it more than previously. I realise that fitness must finally be kicking in. This makes it much more possible to simply focus on The Way, and not wishing it all over for the sake of being at the destination.

As the clouds darken the valley in the late afternoon, we talk about the possibility of rain. This prospect none the less bothers me. It may be a long time ago, but the memory of literally being washed off the side of the Drakensberg mountains remains vivid.

After a fantastic supper of lamb truffle, we retire to the room. As we are getting ready for bed, we hear thunder. Rain soon follows. On the positive side, this will ease the going under foot tomorrow. We look at the weather forecast. The likelihood of showers seems limited. Sleep soon takes me.