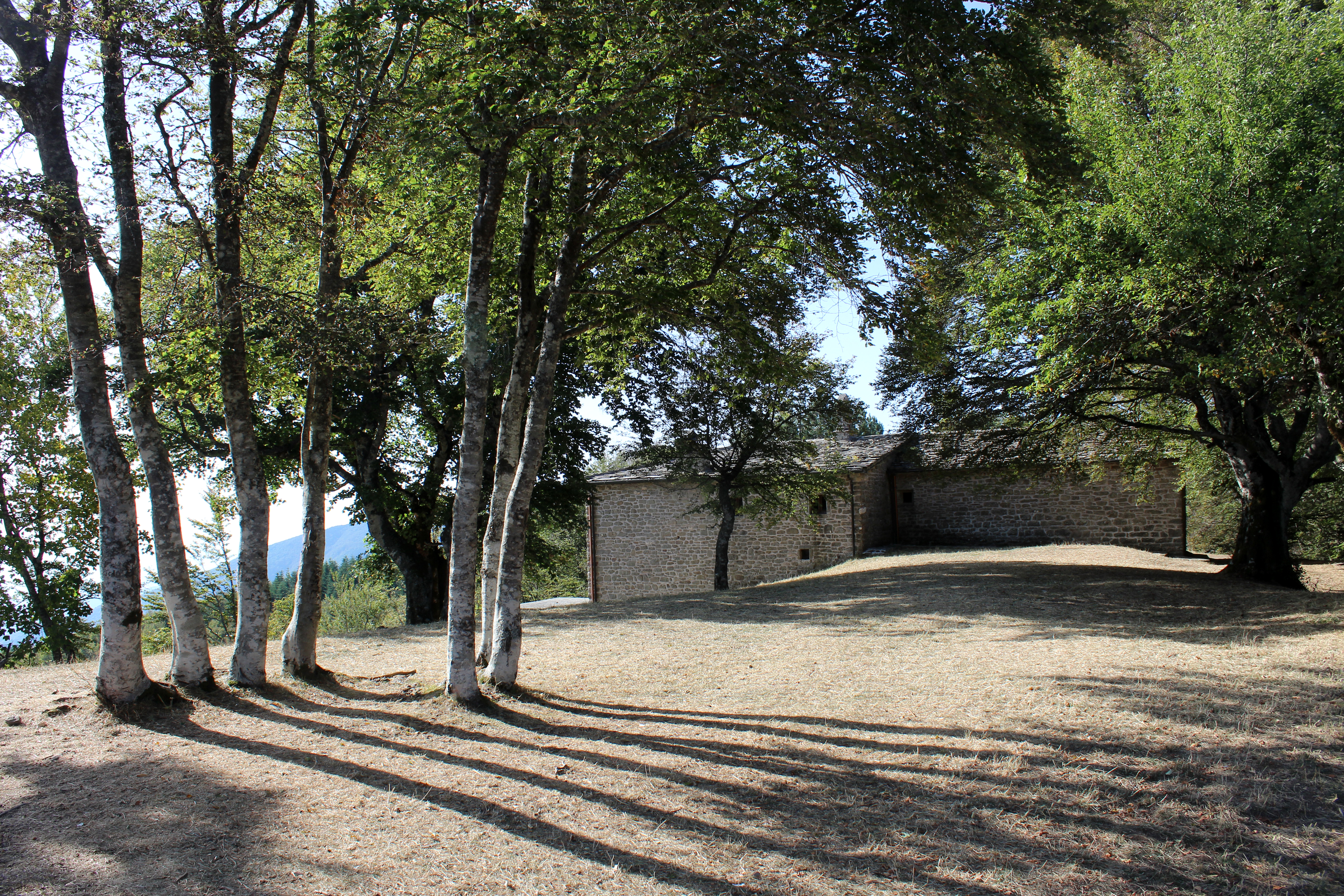 28 August 2017. Today we start Section 2 of the St Francis pilgrimage, which ends in Assisi. Many pilgrims take Santuario Della Verna as the starting point of their pilgrimage.

Today our route with CaminoWays, with whom Travel Managers booked our trek, is taking us off the map and out of the book. The reason? Logging activities have destroyed the path around Pieve St Stefano. The change means going via Eremo Della Casella to Caprese Michelangelo, the birthplace of the most famous sculptor in history.

The additional instructions Niels has does not give any difficulty ratings. However, by the number of poggios mentioned, I’m sure we’re in for a tough day. The total ascents and descents confirm this – 664 and 967 metres*. By now we already know that we have to take any distance between two points with a pinch of salt. It invariably works out to be a longer walk. Today’s is given as 15,6 km.

The day does not start well for me. I have a pre-departure attack of diarrhea, cause unknown. Again, unvoiced doubt sets in. Will I even be able to complete this stage? In spite of this, we set off just after 06:00. 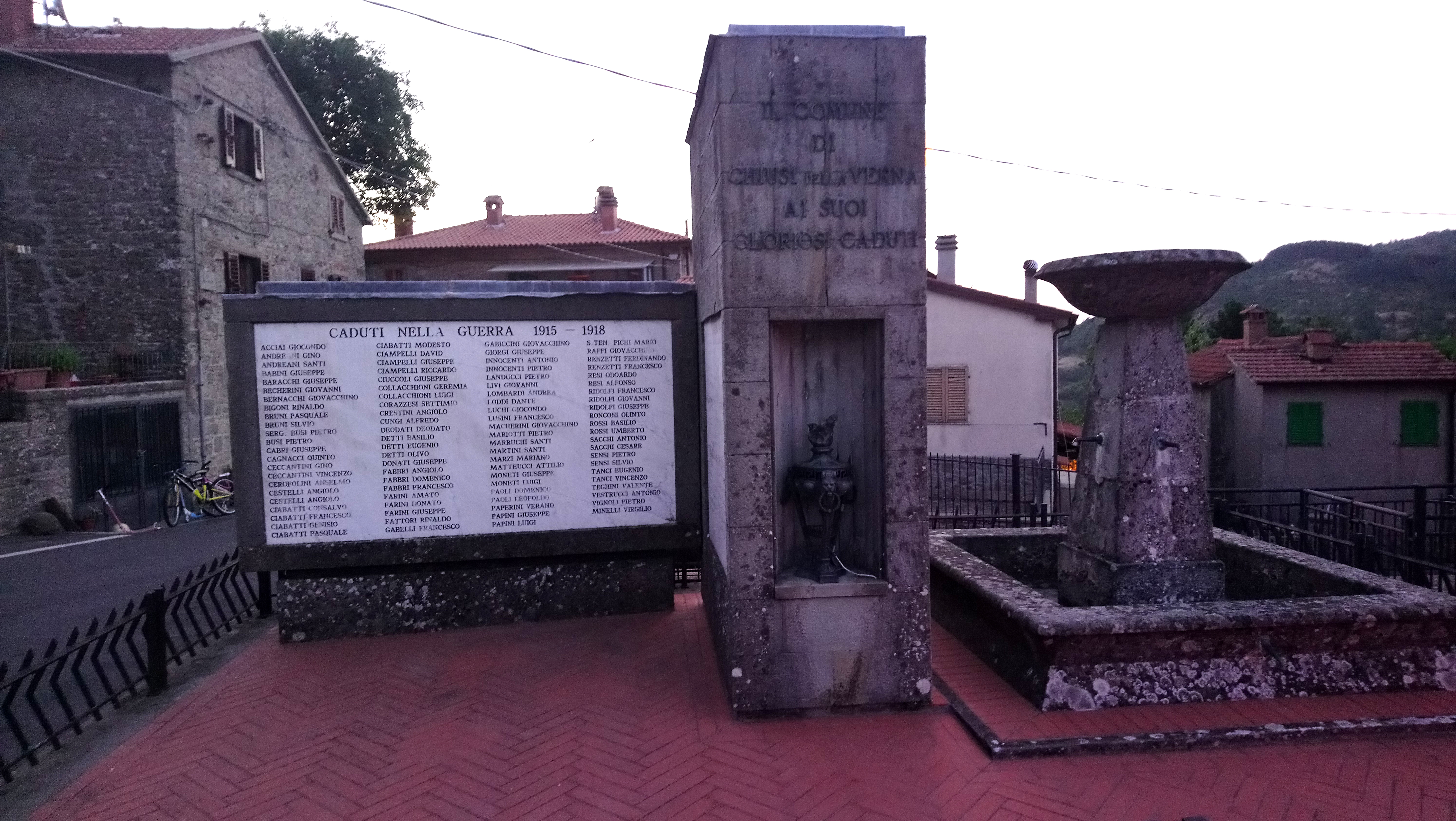 At the Piazza dei Caduti we pause for a moment in front of a War Memorial. As monuments go, this one is tiny. Coming from South Africa I’m used to seeing monuments commemorating the fallen in the two World Wars. I read the names. The side on which they fought does not matter. Several surnames occur more than once. I wonder if those families survived at all, torn apart by such uncalled for death of loved ones.

How strongly is war not in contrast with the spirit of St Francis of Assisi, who valued all living creatures so highly?

We descend into the valley and soon ascend very steeply. Another Poggio flogging awaits. A very clear view of La Verna in the early morning light offers wonderful opportunities for pictures. At the top of Poggio Assunzione we have a very welcome water break. We decide to push on to Eremo Della Casella before having breakfast. 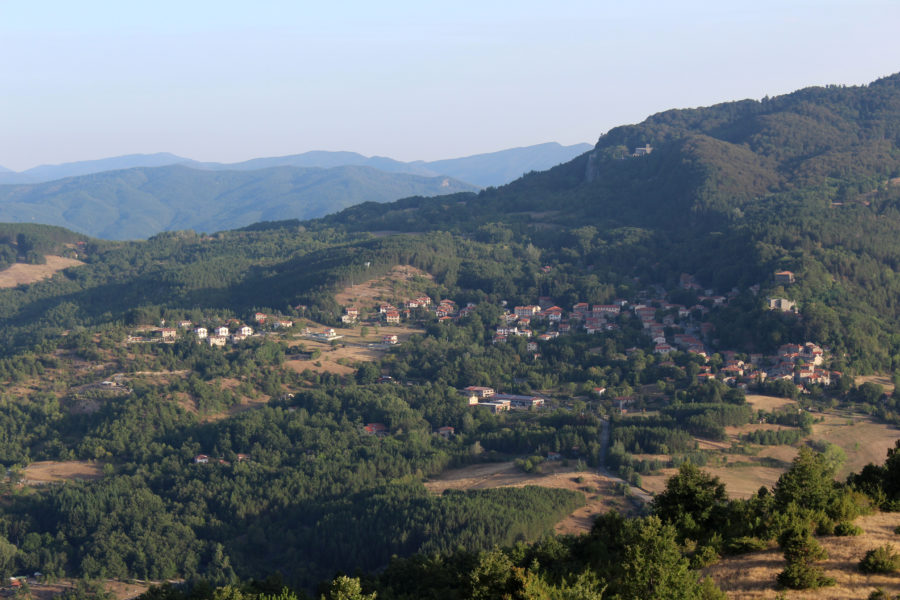 Looking back in the early morning at La Verna on the ascent of Poggio Assunzione (Photo: © Henri Craemer)

Following the green signs painted on the rocks in the path, we pass Poggio Fontachili and Poggio dell’ Abete. Almost without noticing time slips by, as we take in breathtaking scenery. The walking takes its familiar pattern – Niels striding ahead, often out of sight and me following.

Not too long after Niels, I arrive at Eremo dDellaCasella. He’s already busy having his breakfast. I relieve myself of my backpack and unpack my snacks and water. With the performance of my stomach at the beginning of the day, I decide to avoid the berries and raisins. I have a large seed wafer and one of the colourless flavourless energy wafers. We both walk around the Eremo and take photos. 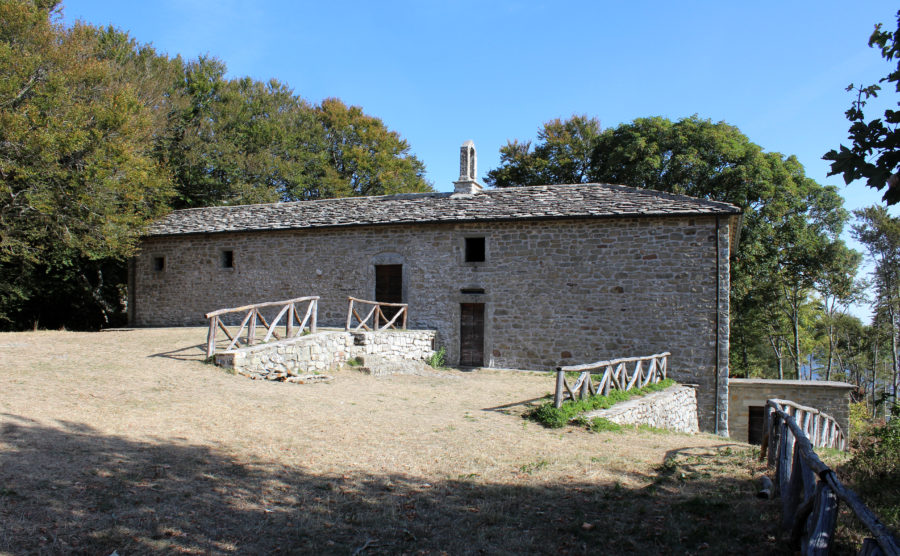 I stand where St Francis planted a large cross. This is where he said goodbye to his beloved mountain for the last time: “Addio, monte di Dio! Addio monte Alvernia! Retati in pace, che più non ci vedremo.” (Goodbye, God’s mountain, Goodbye Mount Alvernia! Rest in peace, though we’ll not see each other again.)

I inadvertently look at my hands, because St Francis had already received the stigmata at this point in his life. I am not Roman Catholic by faith, yet I am so moved by this Saint and his life. There is something so beautiful about him, I find it hard to explain.

Towards the end of our break, a woman comes striding up to the Eremo. By her look and shape it is clear she is a very seasoned hiker. We find out that she has already been walking for more than 800 km from Munich, crossing the Alps on her way to Rome. She has also done several other walks like this one, including the Spanish Camino. I am in awe. She reiterates my realisation that it’s not the destination, but “being on The Way” that is important.

We pass through the little villages of Fragaiolo and Lama. Everything seems deserted in the early afternoon riposte so common in these small towns. As we approach Caprese, it seems like a daunting prospect – a castle on a steep hill.

Temperatures climb, sweat pours and foot soles burn. Yet again the last hill tests my limits. My pace is tortoise-like, but somehow I manage to keep going. Relief is huge when I get to take off my backpack and my boots in the Albergo.