26 August 2017, before sunrise. Niels and I leave our backpacks in reception for portage on Stage 6 of the Francigena di San Francesco from Badia Prataglia to Santuario della Verna. This will be the first time I walk with my little red daypack containing a raincoat (not that it will be needed today), some snacks, and most importantly, water. Buoyed by the success of the Stage 5 trek, we set off.

The town is dead as we set off. The Italians really partied hard last night. We head downhill along the road. Then comes our first test: a steep ascent to Poggio della Cesta. The path soon becomes bedrock and gravel. Progress up the thickly wooded hill is slow but steady. It’s still only a slightly faster version of plod-plod-rest for me. 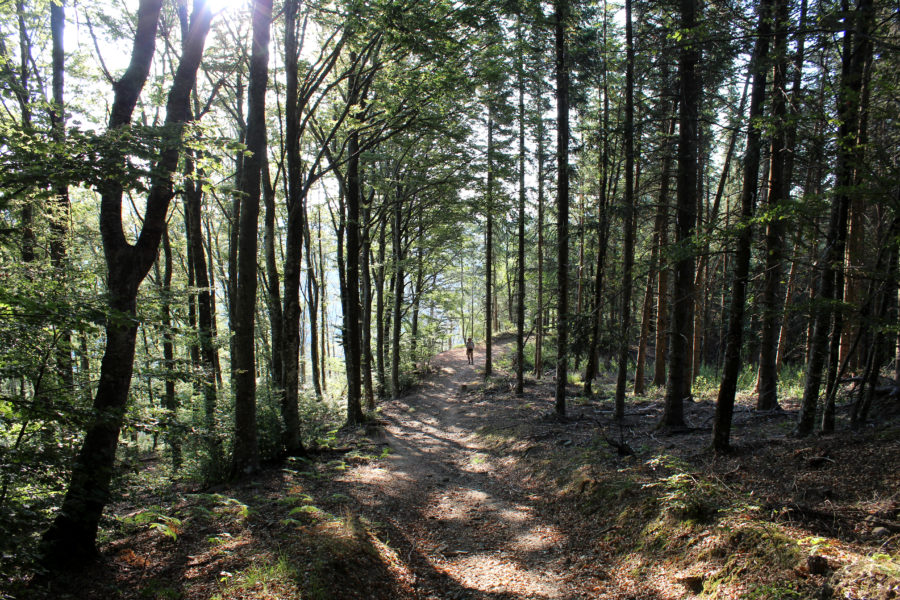 I take a photo of Niels taking a photo of me. (Photo: © Henri Craemer)

As we ascend, there are stretches of dirt trail. I’m now used to seeing spent shotgun shells. The now familiar footprints in dried mud left by pilgrims preceding us are comforting confirmation that we’re on the right path.

However, I note something that makes me feel just a little wary. Apart from the occasional pawprints of dogs, there are a number of very large canine pawprints. This reminds me of the possible presence of wolves. After all, we did hear one last night. It’s as if the wolves only briefly used the path before disappearing into the woods.

When I mention this to Niels, he says “It’s a good thing you’re not wearing red.”

Ha-bloody-ha, I think to myself, what about my little daypack? Still, I’ve never heard of pilgrims being eaten by wolves, at least not yet.

Occasionally the path leads into a clearing, offering spectacular views. Badia Prataglia becomes more and more distant. Opportunities to take pictures also help me to catch my breath. We stop twice for water breaks. At least the path and instructions are clear. We conquer Poggio della Cesta and rest in a beautiful tranquil clearing.

We pass the three poggios identified on the map. A gentle descent begins on a good path. The time on the camera reads 08:13. It’s already hot and getting hotter.

Wide beautiful vistas lift my spirit. I have to pinch myself. I am actually walking in Italy! My words fail in describing the beauty of this landscape.

Towards Frassineta we drop steeply in altitude. Niels becomes a moving dot on the descending road as he pulls further away from me. This pattern has become the standard way of our hike. I am alone. I pass some farmers out in the fields. We call out, “Buongiorno,” and wave our greetings to each other.

As I approach Frassineta, I see Niels resting on a bench next to the church. Camera reading: 08:41. He has had quite sufficient time to rest. I stop and take out a few snacks for breakfast. It feels as if I’d hardly sat down when he starts getting ready to go. 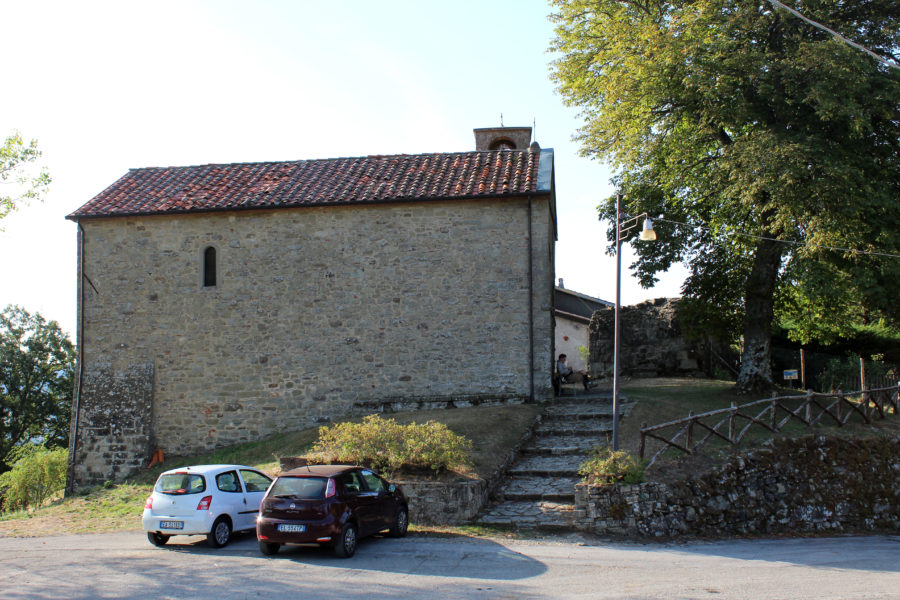 Niels next to the church in Frassineta (Photo: © Henri Craemer)

“Come, come,” he urges, “the path won’t walk itself.” In his gentle way, he can be very definite and firm.

The next village is Rimbocchi. Before that, Poggio della Forca awaits. It’s comforting that the climb will not be quite so long and steep.

The heat builds. We pass fields of gold in the morning sun. The ascent goes well, with Niels pulling away as usual. The descent leads into tranquil woods

Approximately 20 minutes away from Rimbocchi, walking through the forest, the silence is shattered by a number of shotgun blasts. They are so close that it startles me. Then it occurs to me. Very seldom have I heard any birds. Back home there is the continuous background chatter of a wide variety. 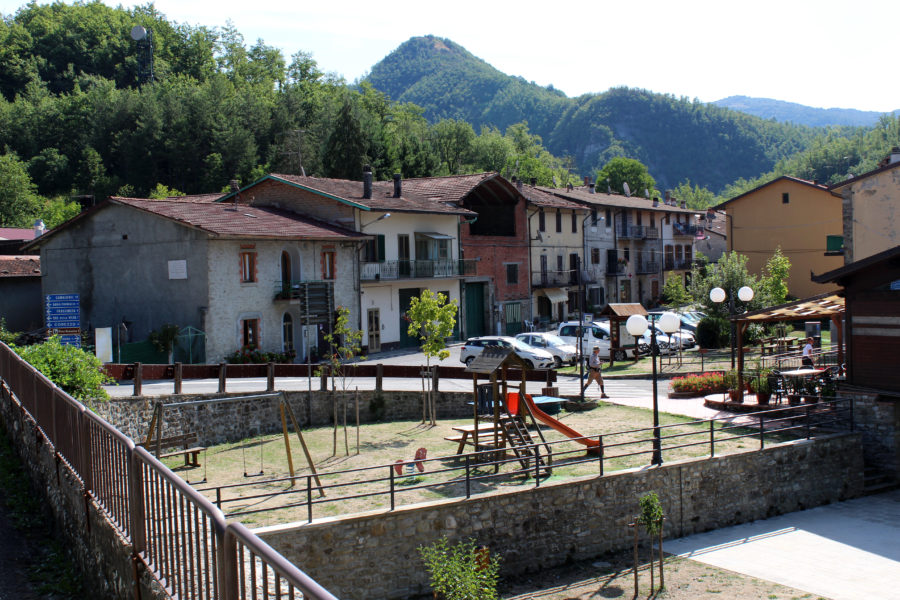 Niels waits for me at the bridge marking the entrance to Rimbocchi. It’s a small village where we will have something to eat. He goes in and orders beer for himself and aqua frizzante for me.

I may be in better shape than I was during the murderous trek of Stage 3, but I’m feeling extremely exhausted. The heat is taking its toll.

However, looking at the map I can see that the most severe test of the day is yet to come.