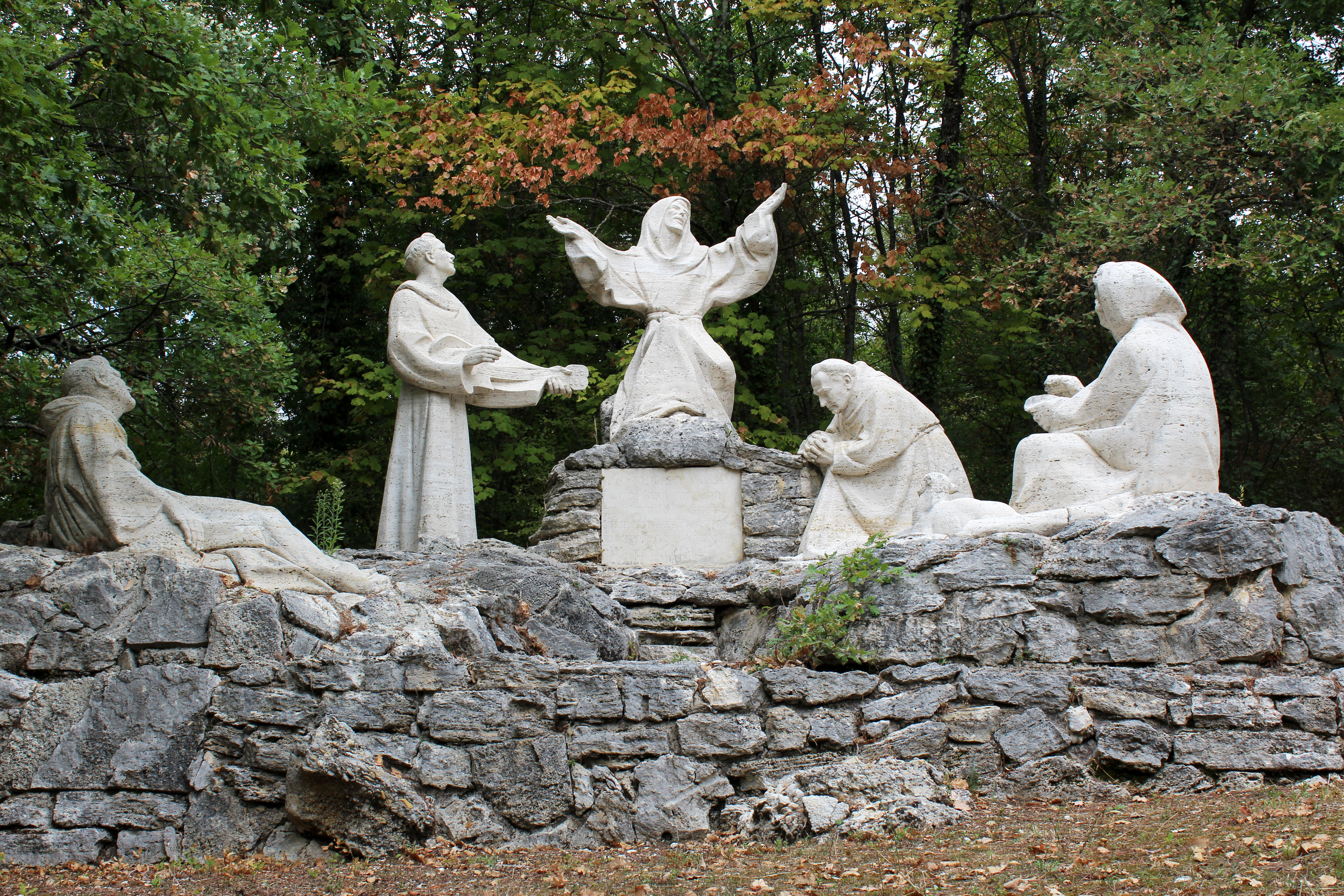 15 September 2017. Breakfast and the raiding of the buffet table have become routine. Not for the first time Niels scrutinises my selection of cold meats. He comments that processed meat could possibly be the source of my chest problems. I know, in all likelihood, that he’s right, but I brush his remarks off and pack some anyway. The Italians are so damn good at processed meats, how can I resist?

Stage 23 of the Way of St Francis beckons. According to Sandy Brown, it’s a moderate stage, some 17.7km, with ascents of 395m, and descents totalling 745m.

As we’re preparing our packs, I choose to leave my camera tripod behind. Apart from the time in Florence, I only used it once – yesterday evening to photograph the sunset – and only because I felt I had to use it. I could just as well have rested my elbows on the banister to steady the camera. Niels is happy, since his view for any walk is, “weight is the enemy!” He adds, “pilgrims often leave stuff behind for other pilgrims who follow.” 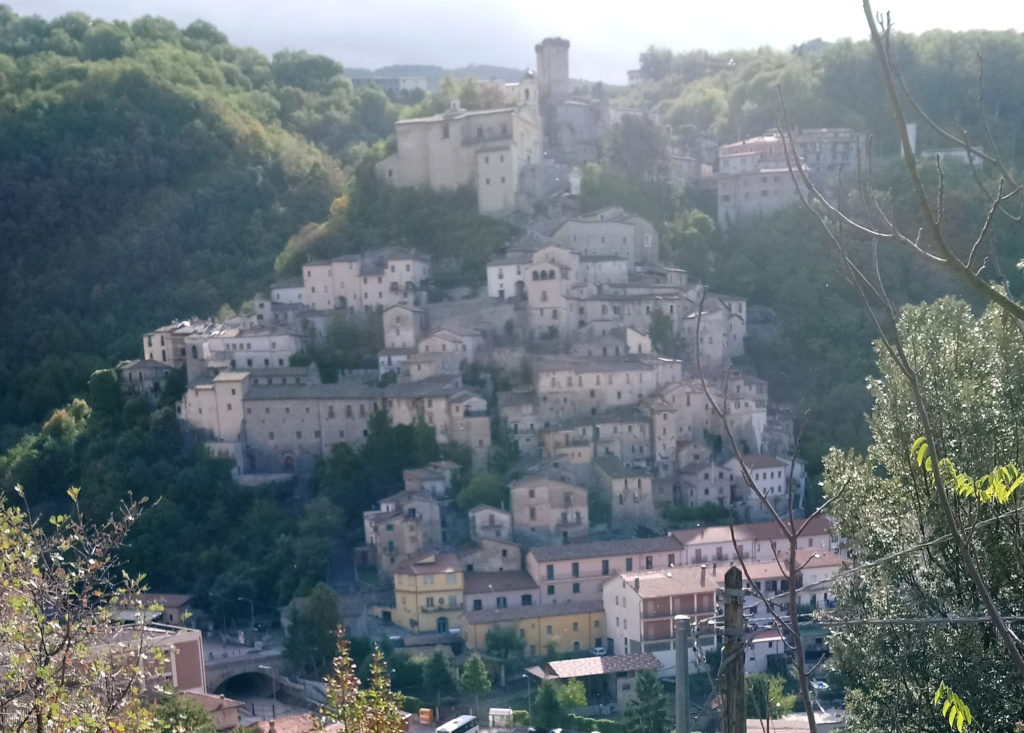 Without retracing our steps to Poggio Bustone, we head for a point in the trail closest to where we stayed overnight. The going is good, although there are some short but serious climbs before we get back onto the trail. I do notice that the uphills are not going quite as easy. Phlegm gathers in my chest – more so than usual. I blast my chest, and things get better.

Using GPS and Camino Ways instructions, we rejoin the trail about one-third of the way to the small settlement of San Liberato. Like so many forests, this one has a beautiful vibe. It’s like being in the womb of mother nature. The mist and overcast conditions cool things and make hiking easier. Unfortunately, it also blocks our view of Valle Santa and Poggio Bustone, which would have been spectacular for this part of the trail.

It’s not long before the sun breaks through. The air still has a lingering haze about it. Humidity levels are comfortable. Landmarks and waymarks pass. The undulating path leads up to a fountain, where I catch up with Niels. I top up my water bottle.

After an uphill which I find quite tough, the way curves around a ridge. The little town of Cantalice comes into view. I immediately want to take a photo, which I do. Further on the view of the town becomes even more spectacular. We are more or less level with the upper levels of Cantalice. A bit further on Niels is taking photos with his iPhone. As my Sony clicks, the two Dutch pilgrims catch up with me. We greet each other and admire the view together. They hang back while Niels and I carry on. 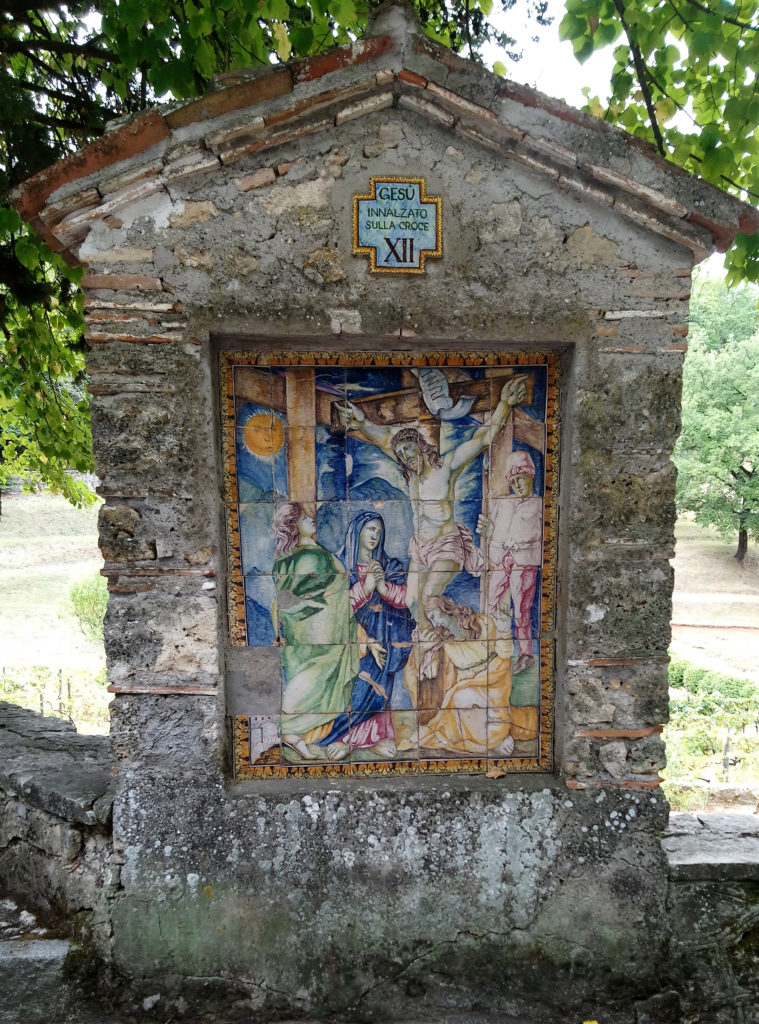 The path takes us past houses, onto a concrete road which turns to asphalt. We pass a number of other hikers, quite likely pilgrims. It’s about 10:00 when we get to a café-bar. The place is surprisingly busy. It turns out that all these people are also on a pilgrimage. Their Italian guide who is also fluent in English and French tells us they’re walking the Way of St Benedict – destination Montecassino. For this part of the journey, the way of St Benedict and the Via Francigena di San Francesco share the same route.

The coffee and the bread with cold meats are wonderfully refreshing. We ad add some frizzante for me and plain water for Niels, and we’re good to go.

As expected that path lead virtually straight up the hill along alleys – some concrete, some stairways. Occasionally we glimpse the route which we’ve already traversed.

On to Santuario La Foresta

Soon we’re in the countryside, gradually making our way downhill. The Dutch pilgrims pass us, and we catch up to them again at a little hermitage where we also decide to take a break. We share some nuts and dried fruit. From the time we passed them on the road to Poggio Bustone we know they rest much longer than us. 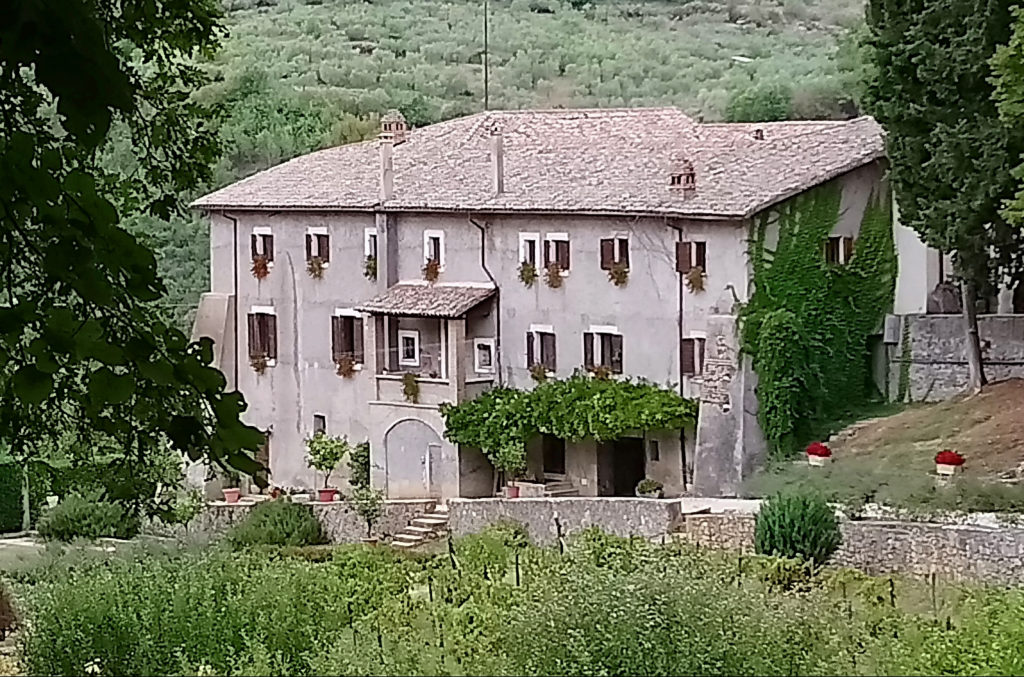 So on we go. By now Niels has hit his stride again after resting, and I’m beginning to slow down. He pulls away from me and I lose sight of him as we walk back into the forest. The Dutch couple passes me. At least it feels as if I’m still on the right way. I have a few anxious moments where the path splits. I follow Sandy Brown’s instructions and start praying for waymarks, which appear not long after the fork.

Time marches on to 12:10. I reach Santuario La Foresta. Almost the first thing I notice is a large number of cats. Then I see why they’re there. A woman has come from the Sanctuary to feed them.

Niels and I have snacks and water next to a panel framed in stone, depicting the twelfth Station of the Cross – Jesus crucified. There is an interesting group of five statues outside the sanctuary entrance, made to look like a gathering (featured image).

This will be our last pitstop before we get to Rieti. There is a brief interlude of recovery and contemplation. I brace myself, shoulder my backpack, and start walking.