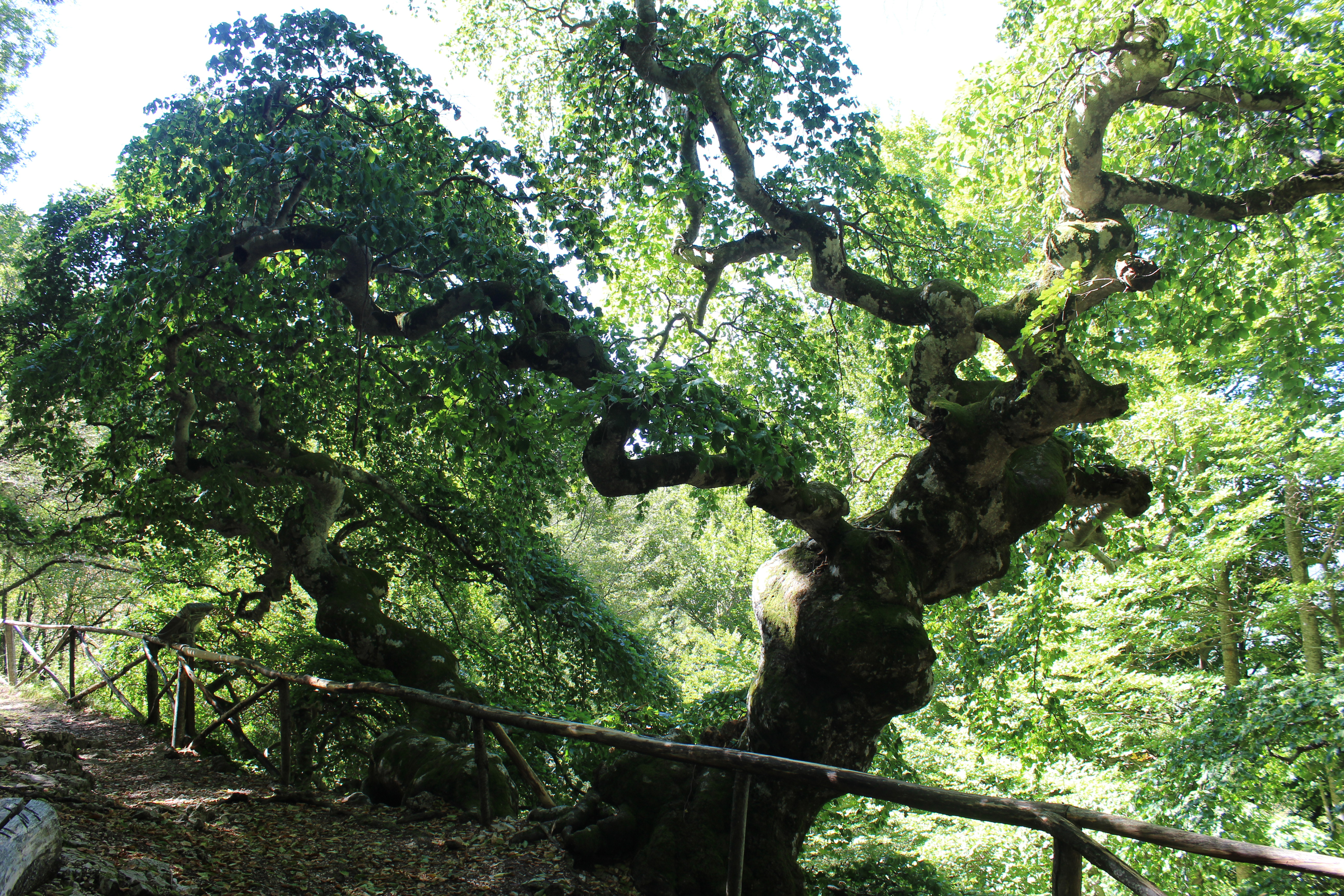 14 September 2017, about 12:40. We’re at a point where we have to make a choice regarding which route to take. Do we go to Faggio San Francesco or not? Looking at the map, it will only be a few minutes before we’re on the road to Poggio Bustone. A detour to the tree will add at least an hour to our walking time.

I feel an intuitive prod. I must go to the tree. “We’ve come this far, we may as well go,” I say.

On we go, and soon we pass the wooden cross on the ridge. The woods become thicker. 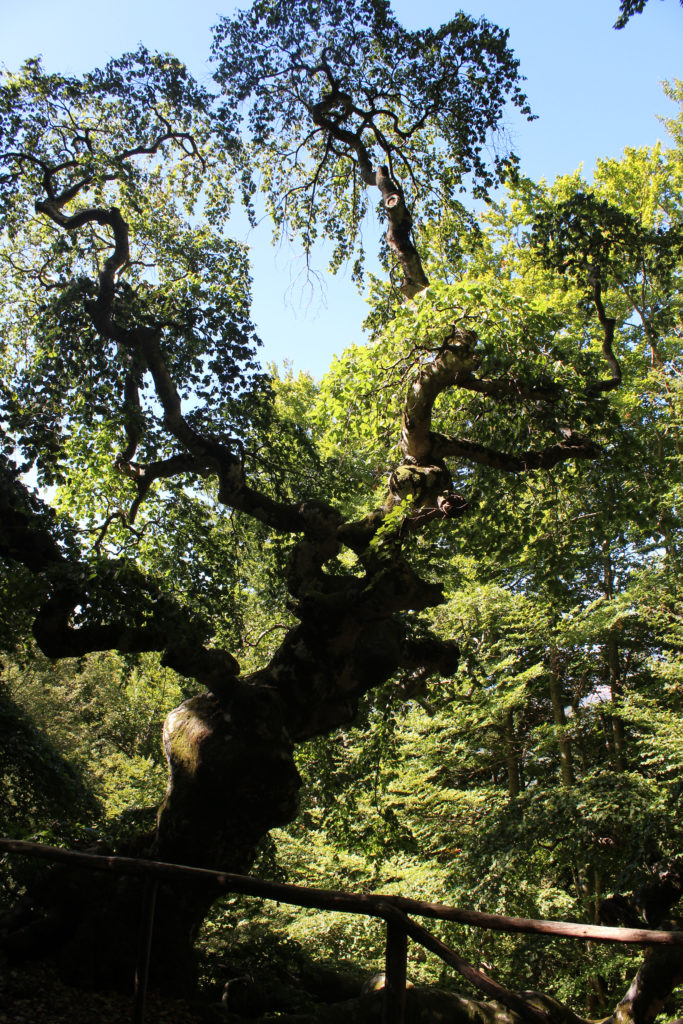 As we head deeper into the woods the silence becomes more intense. I linger to absorb this beautiful silence of mutual knowing. There is an intimate interflow between the forest and me. For a fleeting moment, it’s a silence that knows me, like God knows Adam in paradise.

Strangely enough, this feeling disappears as I get to the tree. Perhaps the broken solitude has something to do with it. Niels is talking to a Dutch couple. They are also on The Way to Rome. I lie back against my pack at the side of the path to rest. I take my photos – very hard to do because the tree is so large.

Legend has it that St Francis was caught in the violent thunderstorm while in the area. In order to protect the Saint, this tree moved its branches to protect him from the storm. After the storm was over, the tree kept its shape.

Faggio di San Francesco has a most unusual shape. It’s regarded as the rarest of genetic mutations for a beech tree – one of only three known in the world.

I rest a bit and have some water. Niels and the Dutch couple disappear around the corner to look at the tree from another angle. Silence returns. Too tired to kneel in prayer, I remain leaning against my backpack. It’s a prayer without words. I simply open up to the environment. The knowing of being in the presence of something so primal and so much greater than myself fills me. The Divine interflow returns briefly.

The Chapel near Faggio San Francesco. A relic of the Saint is stored in the chapel. (Photo: © Henri Craemer) 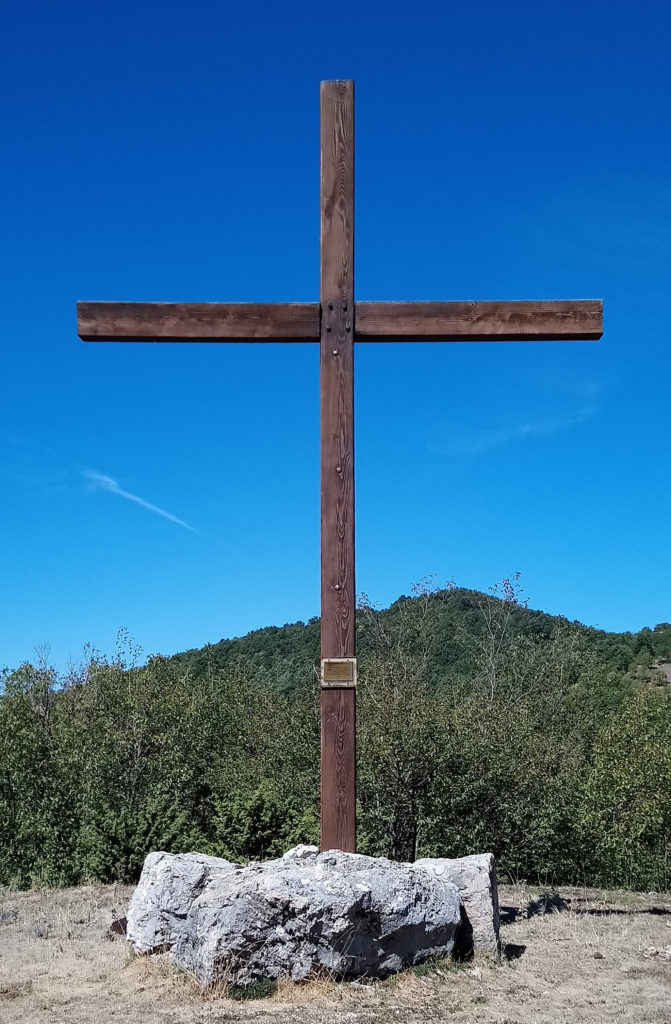 All too soon we have to leave again. The path takes us past a little chapel, and a bit further on the cross we passed coming up. The descent on a gravel road is easy. The Dutch couple is about 20m ahead of us.

Suddenly Niels shouts frantically for them to look out. They stop dead in their tracks and ask him what is wrong. They’re about to step on a fully-grown asp. The snake hurriedly sails off into the woods. They want to go after it out of curiosity. Niels stops them. They’re completely unaware of the danger. If it bites them, it could be fatal.

In Africa and Australia, we are much more cautious in situations like this one. There are many more species of venomous and non-venomous snakes. People rarely see them in Europe. Where Niels lives it is possible for him to encounter one of the world’s most poisonous snakes on his daily walk. I always carried snakebite serum on my hikes back home.

“Europeans are so unaware of things like snakes,” Niels says. “They don’t even see them in situations like these. They can easily be bitten.”

Not long after that, we pass through the village of Ceparro. We have stunning views of Lake Lungo and Lake Ripa Sottile in Valle Santa.

Clouds have steadily been gathering.

“What the snake told me is that rain is coming. They often go out of their holes to forage before it rains. It’s like the coming rain makes them agitated.” – Niels.

Not long after, we hear the sound of distant thunder, gradually growing louder. We push the pace harder. According to Sandy Brown’s book we still have about 6km to walk to get to Poggio Bustone. The surprising thing is that we see microlight aircraft.

“Either they’re playing a dangerous game with the weather, or it’s not going to rain.” – Me.

Somehow, we misunderstand the instructions in the book. The path we turn onto seems quite OK. The markers seem quite clear. In Niels’ additional instructions the distance is indicated as 400m. After a half hour, Niels turns to me and says, “This must be the longest 400m I’ve ever walked.”

I agree. I look at the book. We could be on the “impassable trail.” Yet the trail more or less takes the contour of the mountainside and seems far from impassable. Not long after we descend onto the road and reach the outskirts of Poggio Bustone. The end of Stage 22 is close. 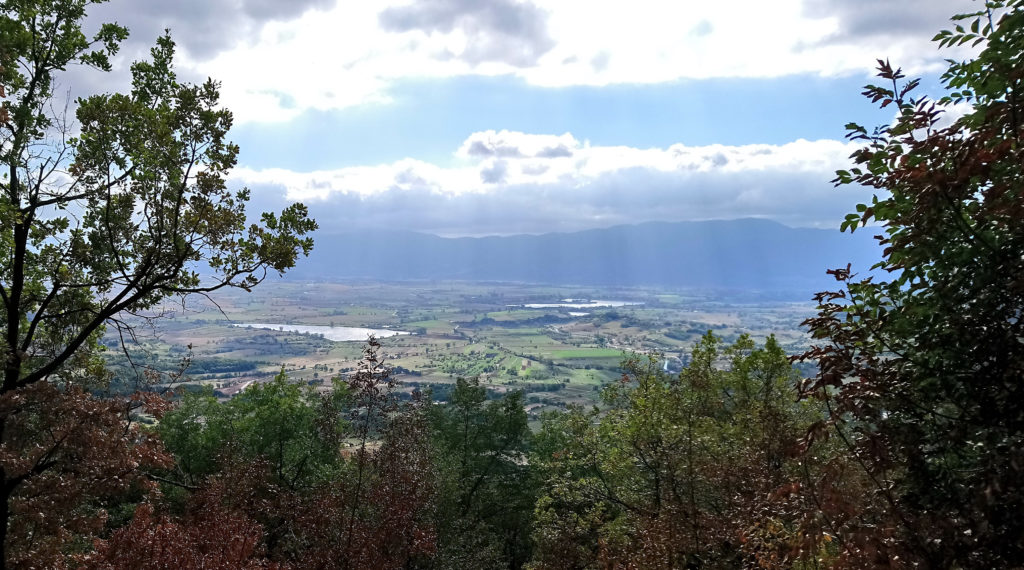 A view of the Valle Santa (Holy Valley) from the “impassable trail.” (Photo: © Henri Craemer)