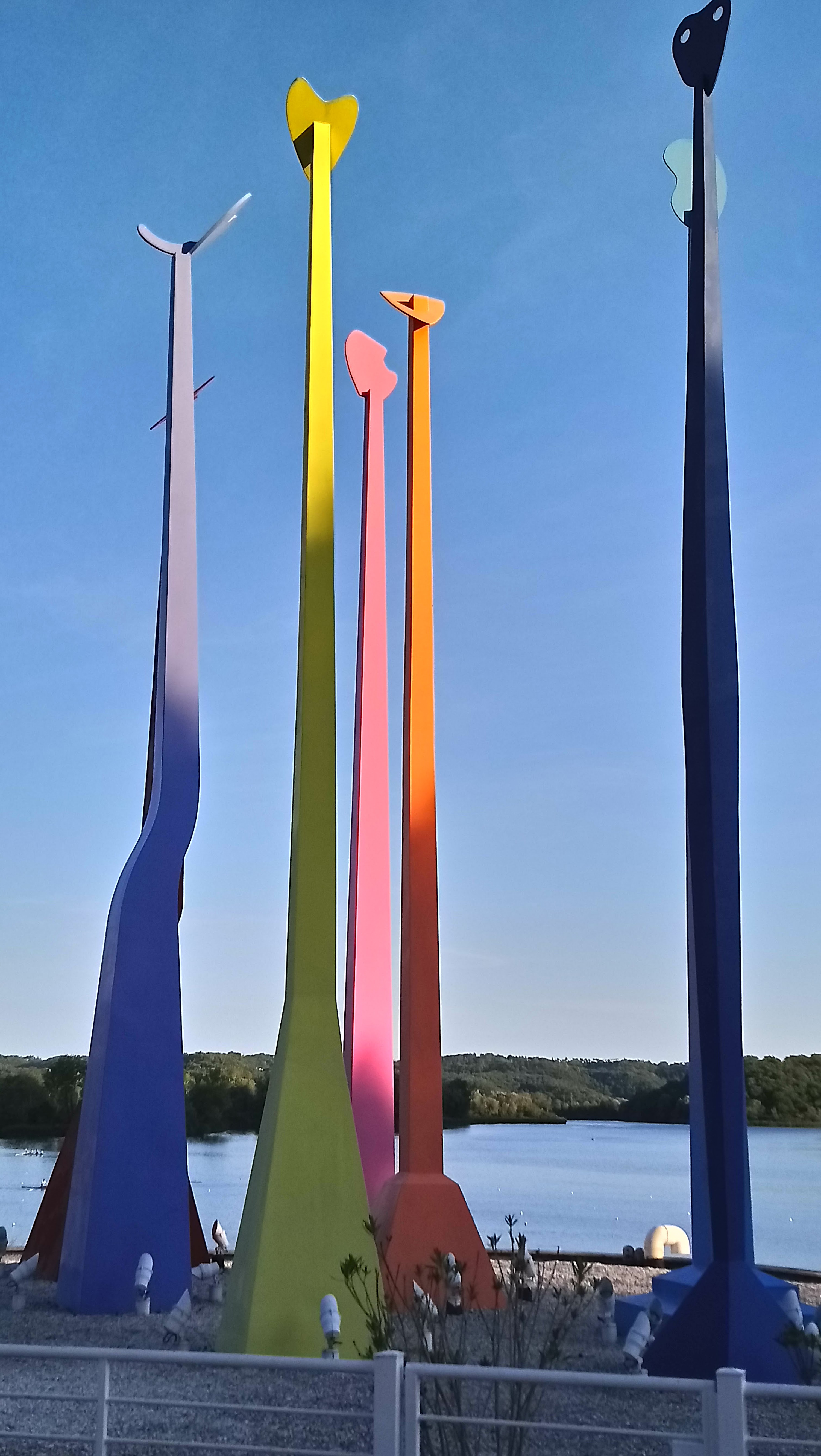 14 September 2017. We’re up early for a difficult stage on the Via di San Francesco. The statistics and rating indicate a hard day of 21.8km* to be covered – more or less an average day’s distance for the Way of St Francis. Judging by the mountain backdrop to Labro across Lake Piediluco, it’s easy to believe that we’ll ascend by 978m and drop by 662m.

Our packs are ready, each loaded with 1.5litres of water in refilled frizzante bottles. We take it easy enough not to leave before breakfast. Because Hotel Miralago caters for tourists, the breakfast layout is excellent. Stage 22 ends at Poggio Bustone. There will be no replenishing of food and water before then. So we raid the bouffe table for stuff to keep us going – oranges and apples, plus bread, cold meats, and cheese for sarnies. 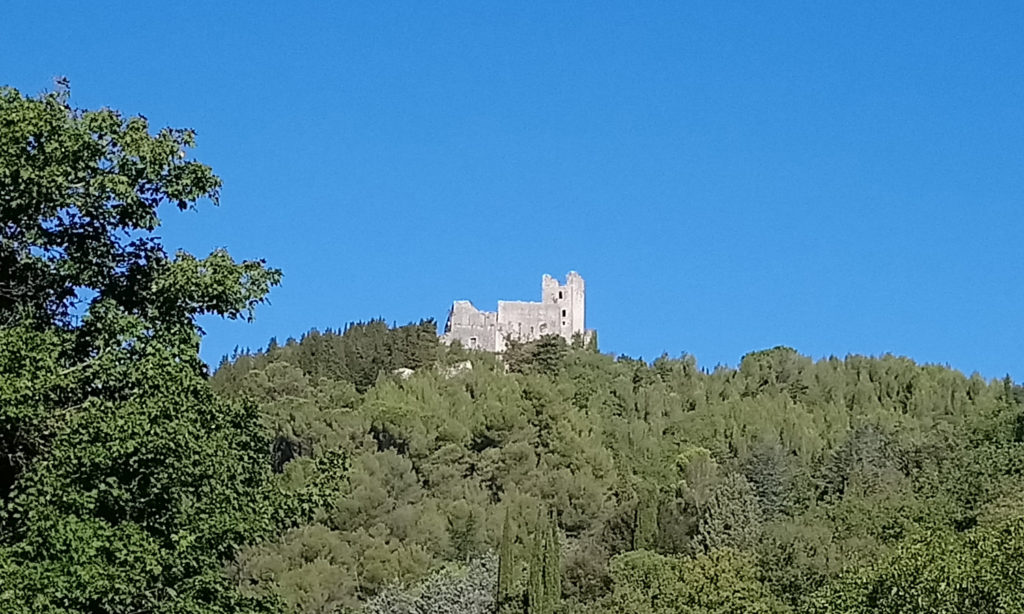 From Umbria to Lazio

In leaving, I’m too slow. I get outside, and there’s no sign of Niels. Has he already left? I pull my water-worn Sandy Brown book from my pocket at the weirdly colourful giraffe-like sculptures (featured image). After checking where to go I start walking. I’m about 100m down the path when I turn around and see him catching up to me. Apparently, I took a shortcut out of the hotel.

A very flat stretch along Lake Piediluco takes us past some residences and the Italian Rowing Federation’s racing crew headquarters. This part of the walk is along an asphalt road. Then it’s onto a gravel road, right at a fork, over a small bridge, and we’ve crossed from Umbria to Lazio.

Soon we reach our first ascent going into Labro. It’s a steep climb through quiet woods but all is going well. I have slight difficulty in breathing. It’s nothing serious because it clears before I need to use my chest blaster. I think to myself, it’s wonderful to be this fit. I vow that I shall never slip back to previous levels of unfitness once this trek is over. 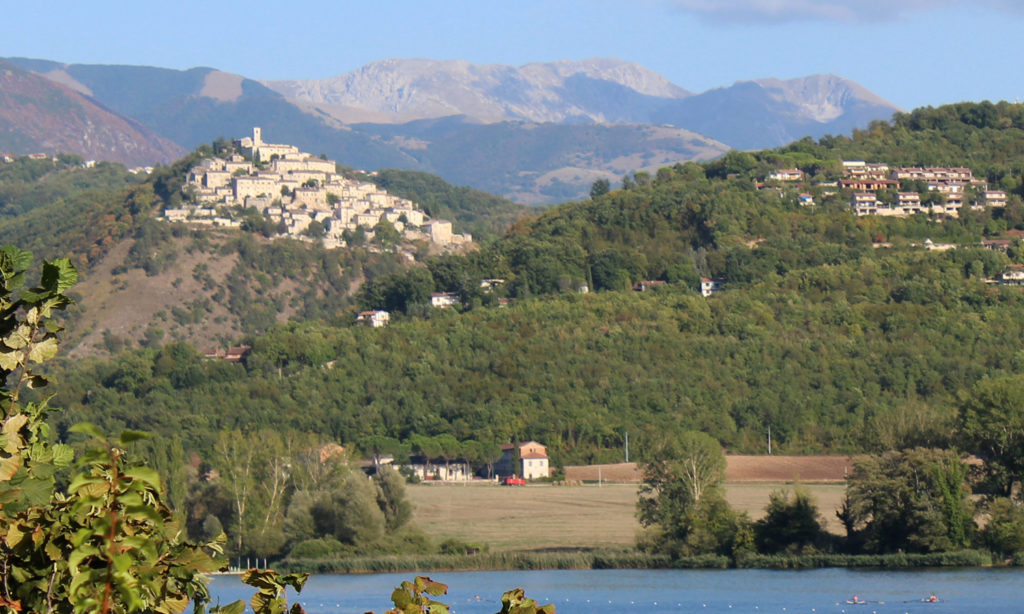 Labro on the route into the mountains (Photo: © Henri Craemer)

Labro has fantastic views with lake Piediluco to the one side and the immense cliff of Monte Terminillo on the other.

Progress is excellent. We get to La Croce. As we enter the settlement there are a number of places where dogs are kept in cages – not an uncommon sight in rural Italy. They bark furiously at us as we pass. Other than that, everything is dead quiet. People are either at work or keeping inside their houses.

We stop at tennis courts out of sight of barking dogs to have some of the snacks we packed. Niels looks annoyed. I am wary and tired enough to say nothing.

A sandwich with salami and cheese, washed down by some plain water, hits the spot. An orange tastes like heaven as the segments explode in my mouth.

“People with their dogs in cages!” Niels remarks, very annoyed. “You can see the dogs aren’t happy.”

I totally agree. My family also has dogs, but they are horribly spoilt. We treat them more like privileged children than dogs.

Niels thinks it’s pointless to have pets. He reckons there is so much wildlife in the area where he lives in Sydney, Australia, that he doesn’t need pets. He can watch possums play in his garden. Practically every house has a family of them living in the roof. When he’s in his office the birds gather on the windowsill and chatter away. He can take a normal walk from his house and encounter various types of snakes and lizards.

I can see that he relates to the wildlife in such a way that he is one with nature – a very Franciscan trait.

As we leave La Croce, I pass a couple of old looking Italian gents. We greet each other. They try to tell me something.

“Pardoni,” I reply. “Mio Italiano non e cosi buono.” (Sorry but my Italian is not good.)

They laugh, pointing up the mountain. What they say sounds like some kind of encouragement. We wave goodbye.

Niels is way ahead. Before the road leads into the mountains, I catch the first glimpse of Valle Santa – the Holy Valley. The solitary silence of an open road surrounds me as we enter a very remote part of the Via Roma. The road hits a patch of asphalt or cement and curves uphill out of sight. This means only one thing. The climb ahead will be serious. I’m grateful for the asphalt because it does make walking easier. 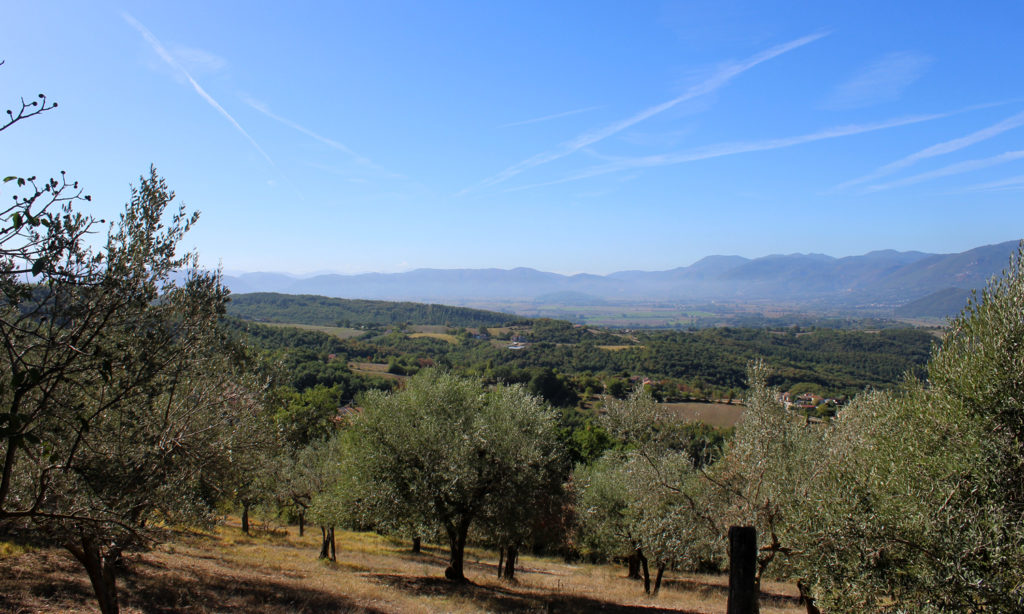 With Niels out of sight I take careful note of the waymarks. I still have my doubts when I get to a junction in the road. It doesn’t look like a fork. It’s more like a definite side junction to the right onto an incoming gravel road. After the Biscina experience I’m weary of forks and junctions. The waymarks are a bit confusing. I test my feeling by walking straight on. Within 20m it feels wrong. I go back and take the right turn. It turns out to be the right way. I’m glad about this because it means that my intuitive sense of direction is working.

I get to the place where one can either turn left to go and see the Faggio San Francesco. Niels is waiting under the trees at the roadside, munching on an apple. I decide to have my last orange.

*Conversions from Metric to Imperial / US