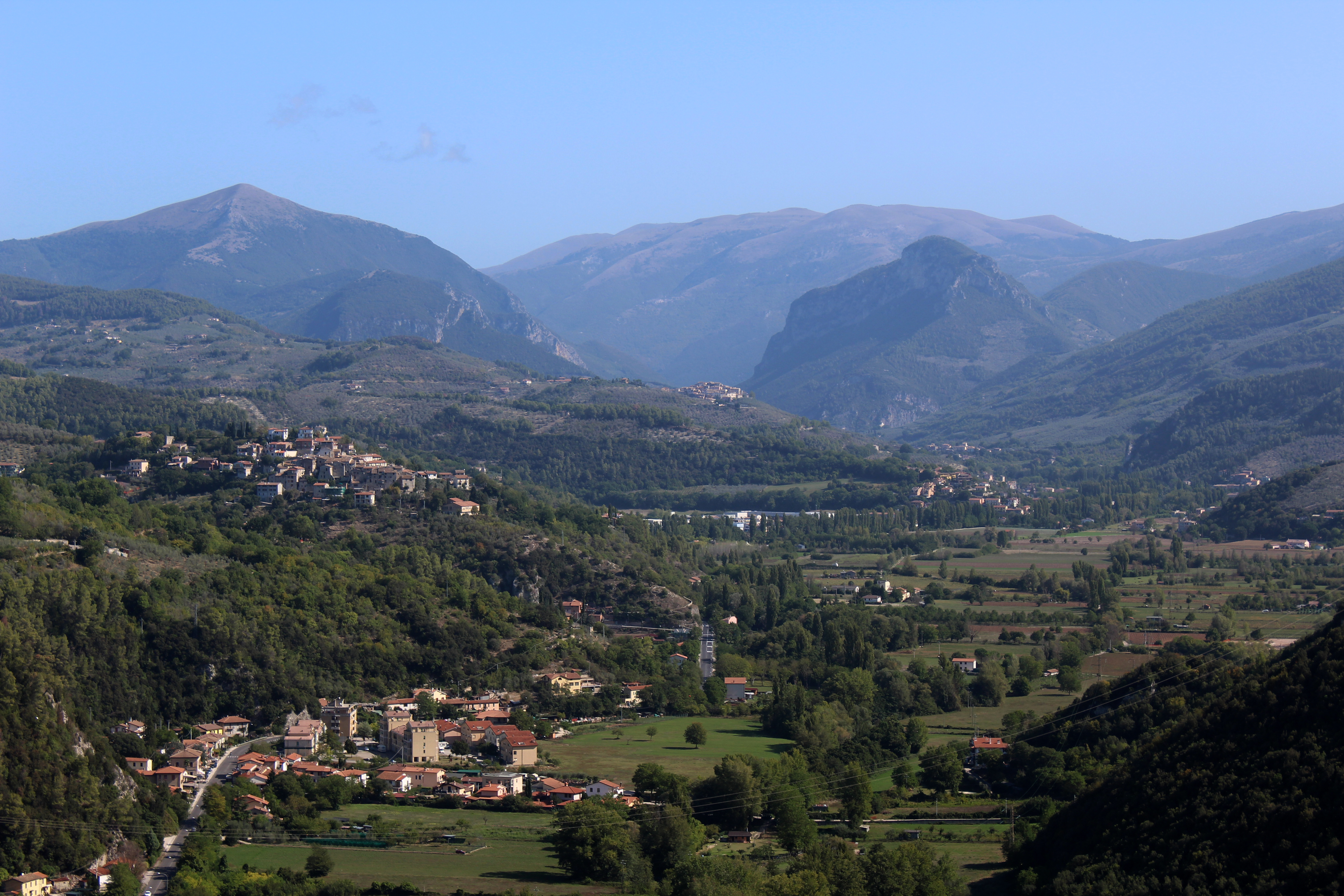 04 Jun Stage 21: The Valley, the Waterfall and the Lake

13 September 2017. Another difficult night with chest problems. There are three possibilities: last night’s food triggered an allergic asthmatic reaction, I’m getting ill, or both. I had to use my blaster (salbutamol inhaler) several times.

I decide to walk in boots again, although the alternative of wearing my sandals is very tempting. The difficulty rating is “Moderate” as opposed to yesterday’s “Easy”. The only serious ascent on today’s journey is near the Cascata delle Marmore (Marmore Waterfall). It’s a shorter trek than yesterday (only 14.5km*). We’ll climb more than yesterday (294m) but drop less (152m).

We have a great breakfast – coffee, muesli, bacon, eggs plus the sweet things the Italians so love to kickstart a morning.

Niels actually has to argue with the innkeeper for him to accept payment for supper and other refreshments. “Times are tough,” he says as we leave. “You can see how empty the place is, and it’s high season. He probably wanted to give us the discount because we’re pilgrims.” With the communication problems we have, it’s hard to tell why he wanted to refuse Niels’ money. 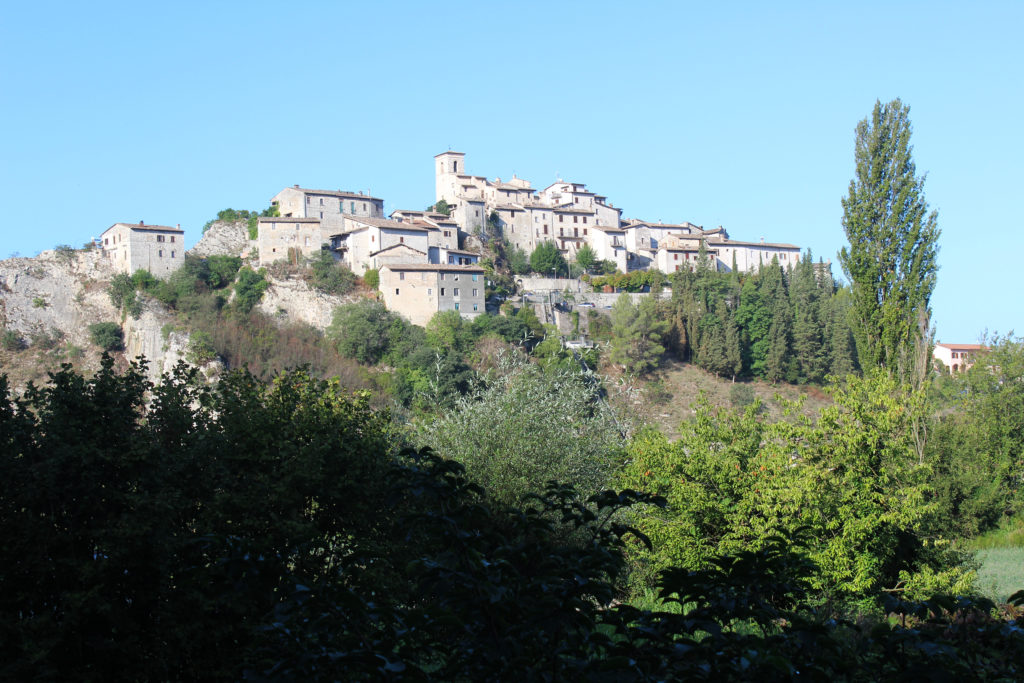 We set off for Piediluco. The Nera valley, bordered by mountains on both sides, shines green in the morning sun. Navigation as per Sandy Brown’s instructions is uncomplicated. The path joins the bank of the fast-flowing Nera river. Quite a few men are either ignoring the “no fishing” signs, or they have fishing permits.

The route leads us away from the river into farmlands. Powerlines can be seen running along very steep mountainsides, most probably fed by the hydroelectric works at Cascata delle Marmore. A few dwellings are scattered along the route. Many trees provide shade but don’t obscure the beautiful views.

After first hearing it, we see a helicopter in the distance. It circles and moves on, only to return. Someone dangling below it is clearly visible. Is this perhaps a rescue mission? Niels is also intrigued by the chopper. When it gets closer we see someone on a cable lowered onto a power pylon. It becomes clear that this is a powerline maintenance crew in operation. 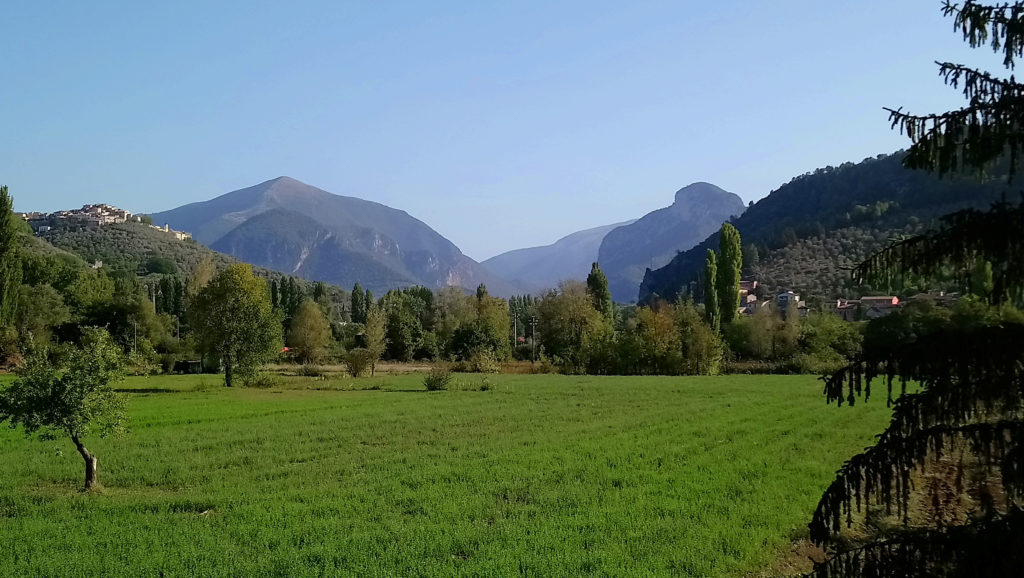 Just before we leave the valley there are roadworks. A trench digger and a grader are busy laying a pipeline. Here’s the thing: The trench is too deep to cross and we’re blocked off on both sides– to the left by thick mountainous vegetation and to the right, a steep drop.

The driver of the mechanical digger signals us to stop. We all exchange a friendly “Buongiorno.” The two have a rapid conversation from their driver’s seats. Very quickly they cover a small area where the pipes have been laid. We cross easily when they call us. I shout, “Grazie mille,” above the noise of the engines. They smile and wave as we pass through.

Soon after the roadworks we leave the Valnerina. The climb is steep. I tire quickly and experience breathing problems. The last time I battled with an uphill like this was on the road to La Verna after leaving Rimbocchi. Fortunately, this ascent is a lot shorter. 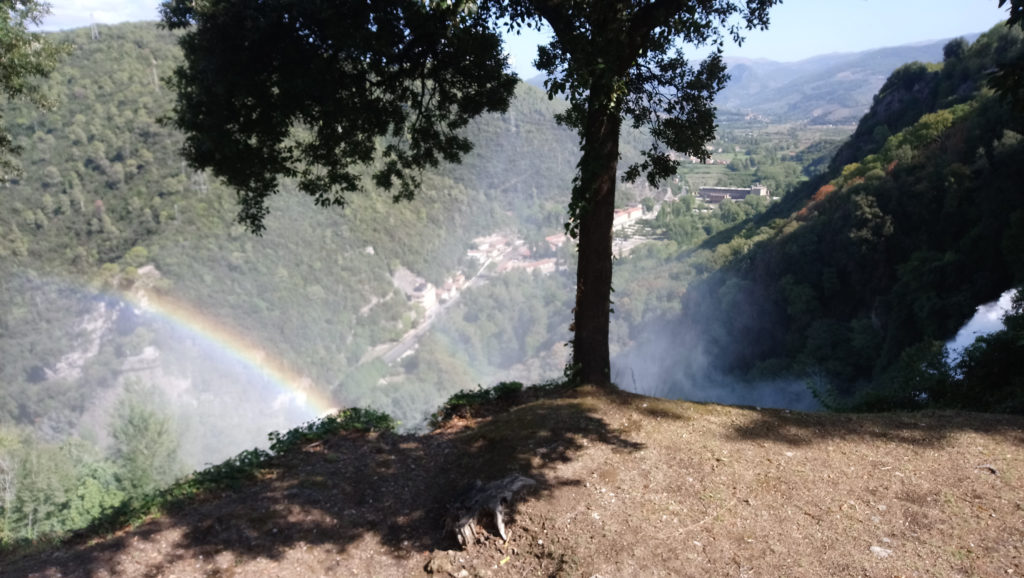 The rainbow at the head of the Marmore waterfall. (Photo: © Henri Craemer) 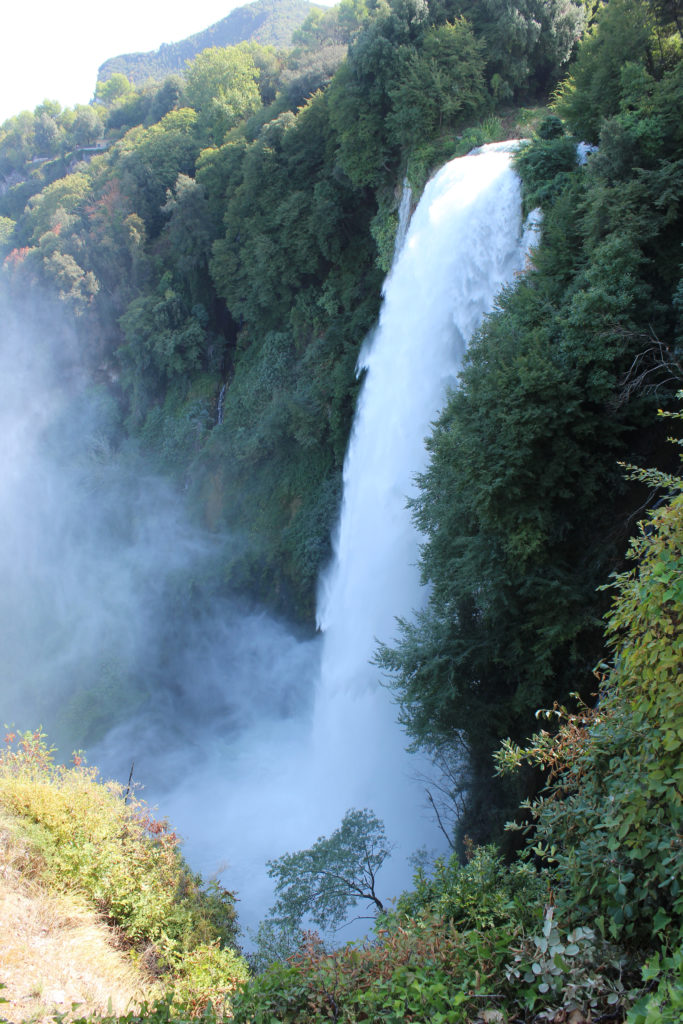 Cascata Delle Marmore is a remarkable feat of Roman engineering. They were certainly masters of waterworks. The aqueducts and this waterfall prove it. The Marmore Waterfall has a long history, dating back to 271 BC. The Romans diverted the water of the Velino river over the cliffs of Marmore, to drain the swamps around Rieti. It solved Rieti’s problems but caused occasional flooding of the Nera river. The problem was finally solved with canals completed in the 16th century.

This past summer has been very dry in Italy. That means the canals from Lake Piediluco are only opened occasionally to flow over the cliffs. We get to a field close to the head of the falls and see surplus parts from the hydroelectric dam. Still, we hear no water cascading down a cliff.

It’s a few minutes before 11:00. We cross one of the canals on the way to the kiosk where we buy entrance tickets to see the falls. The attendant advises us that the canals will be opened at 11:00. Soon after that, the waterfall will cascade over the cliffs. We get ourselves some frizzante. The first litre doesn’t touch sides. The next 500ml satisfies me.

We hear the water beginning to flow and make our way to the falls. My first sight of Cascata delle Marmore is a rainbow at the head of the falls. We follow the walkway to where we have a clear view of the falls. What a spectacular sight! It’s is the tallest man-made waterfall in the world. In three cascades it drops 165m. The tallest clear drop is 82m. I attempt a few photos, but we’re too close and the angle is wrong, to catch the full picture.

After leaving the falls, we cross the Strada Statale 79. A well-meaning Italian gentleman points us in the opposite direction to where we’re supposed to go. We nearly get ourselves lost again. However, the detour is short.

The silence after the rushing water of the Cascata Marmore is very noticeable as we pass along the Velino River canal. The dirt road is flat and easy. It’s easy to see how such beauty can inspire a legend such as the love story of Nerina the river-nymph and Velino the shepherd. 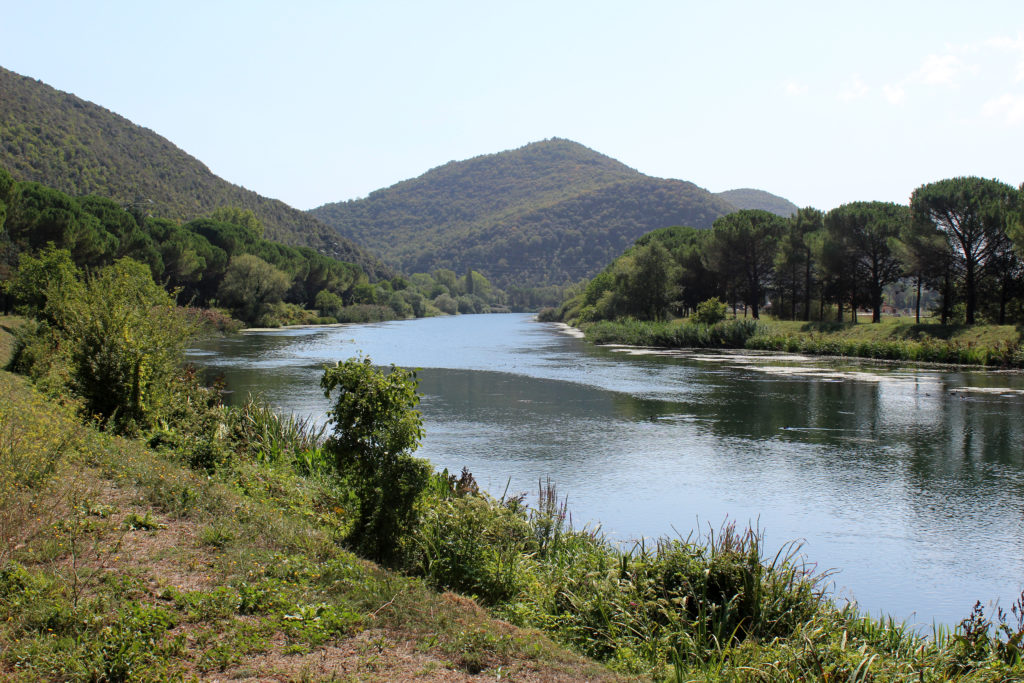 When we get to Lago PIediluco Niels stops me. “What do you see?” he asks.

“And what does that mean?”

“I don’t know. A circuit for speedboat racing?”

“No, it’s meant for rowing. A lake between hills or mountains like this has very little chop on the water. It’s ideal for rowing.”

Somehow, we find our way up a poggio after walking a stretch along the SS79. The going is tough. There are waymarks to indicate that we’re on the right way. The path winds its way back to the main road and into the town.

Soon after, we find ourselves in Hotel Miralago’s reception, booking in. I am feeling very tired, yet remarkably well. I settle in and do the usual chores and showering. 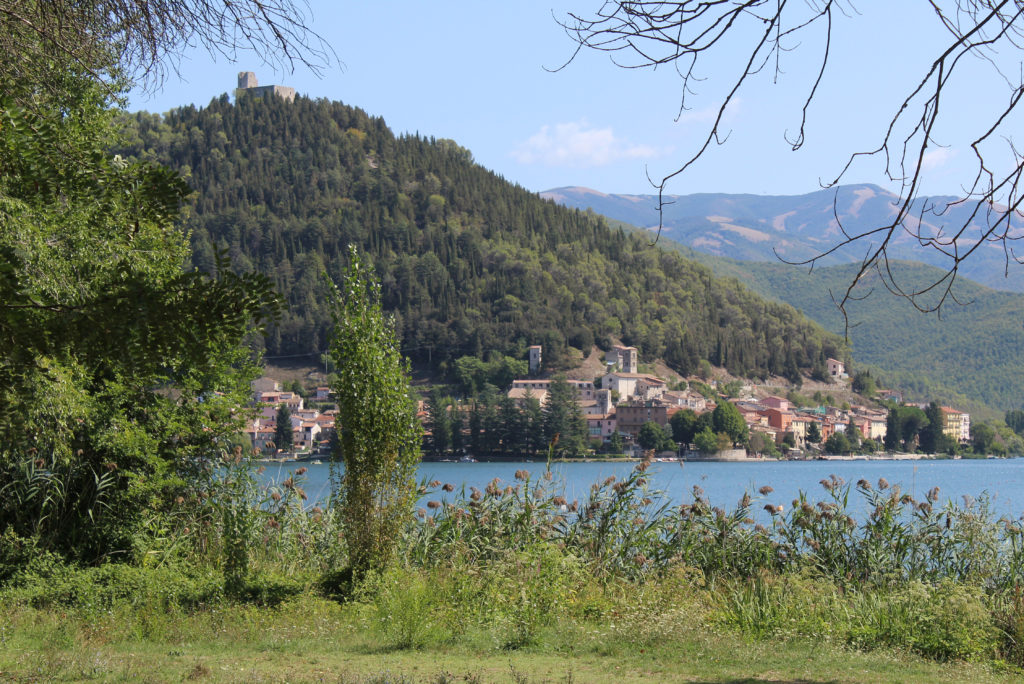