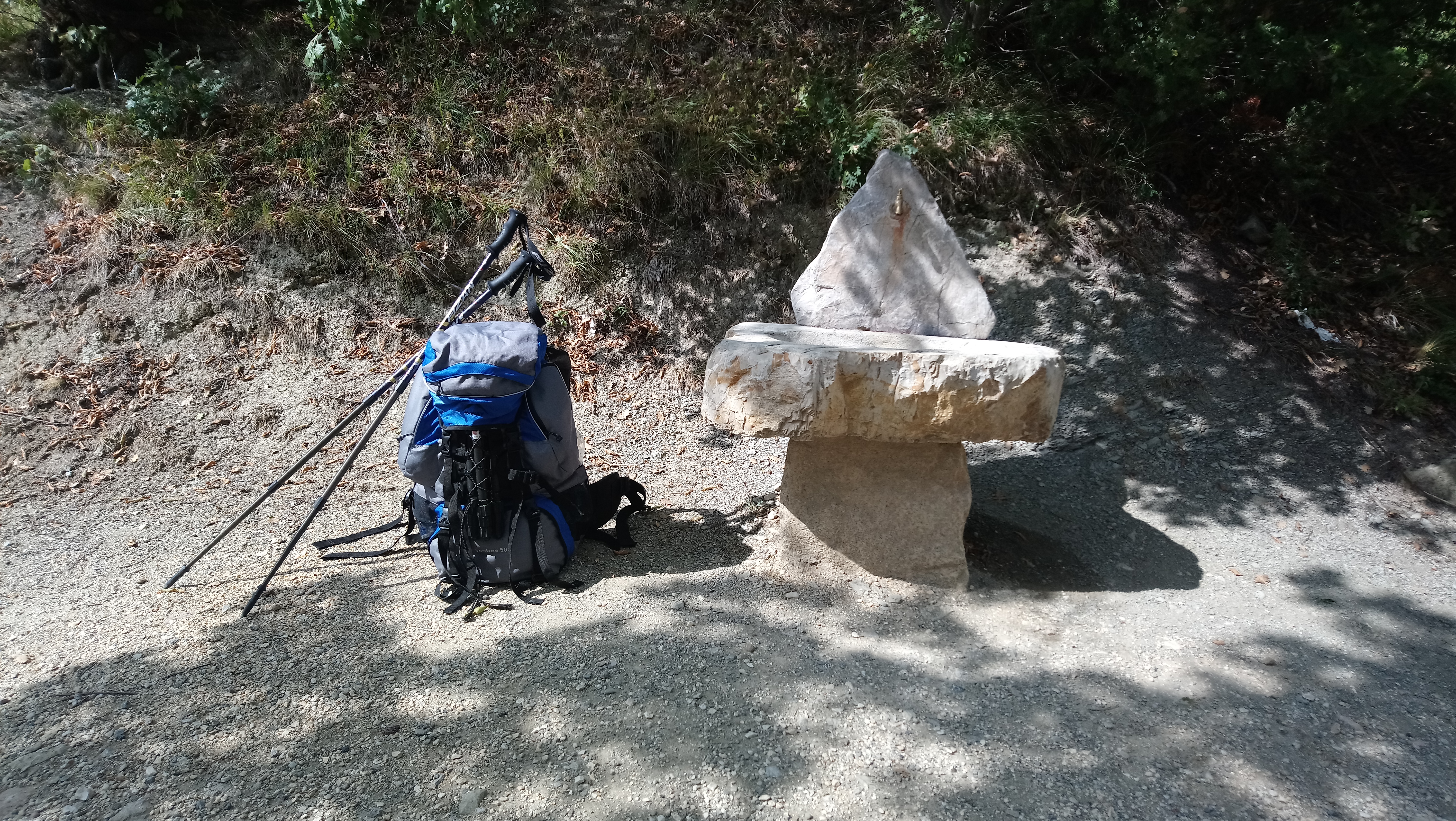 6 September 2017, just after 13:00. I have always been one who does what is necessary. I want to know what I’m faced with. The book says 13.4km*, ascents 530m, and descents 456m. In comparison with the what we’ve done today, it means more climbing, less descending, and a shorter distance to what we’ve already covered. I try not to think about the numbers for trekking Stage 14 plus 15 of The Way of St Francis. They add up to the longest walk we’ve done on this trek. And it is late.

It’s all good as we set off. We pass some graffiti portraying the life of St Francis. There is a short descent before we head into the wooded hills again. 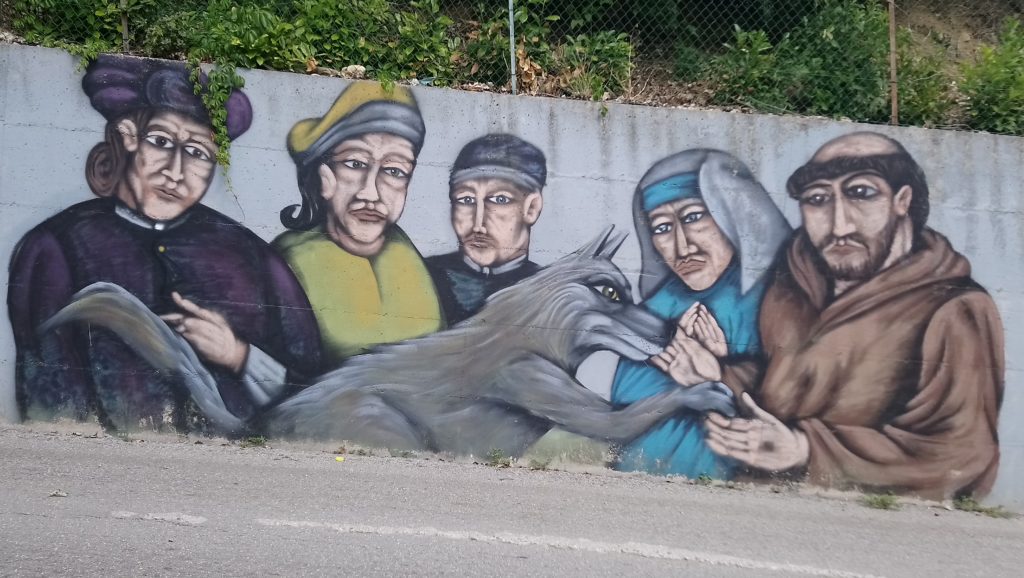 Graffiti of St Francis talking to the wolf while brothers look on. (Photo: © Henri Craemer)

The Snake in Paradise

Niels suddenly stops. I walk up to him. In the path is a snake. By African and Australian standards, it’s small – about 40cm long. It’s covered in spots. However small does not mean it’s any less dangerous, so we treat it with respect. Niels gently prods it with his hiking pole, and it moves off without any further problems. What is a paradise without a snake?

To my surprise, I’m keeping up with Niels. I am a little concerned. Is his ankle slowing him down? However, my concern about this is short lived. He streaks on ahead, and I just know I’m not going to see him for a while. Fortunately, the instructions in Sandy Brown’s book are clear and waymarks are plenty.

Meanwhile, the cloud cover has disappeared, and the temperature has soared. It’s as hot as any of the hottest days we’ve had yet. I’m running through my water supply at a rapid rate. In the book mention is made of a stucco house, a bench and a meadow. I get to a T-junction at the summit of the hill, thinking to myself: I passed the house and meadow, but where’s the bench? I get my first glimpse of the Rocco Maggiore above Assisi. It’s too far for a decent photo. It feels too far for getting there before sunset. 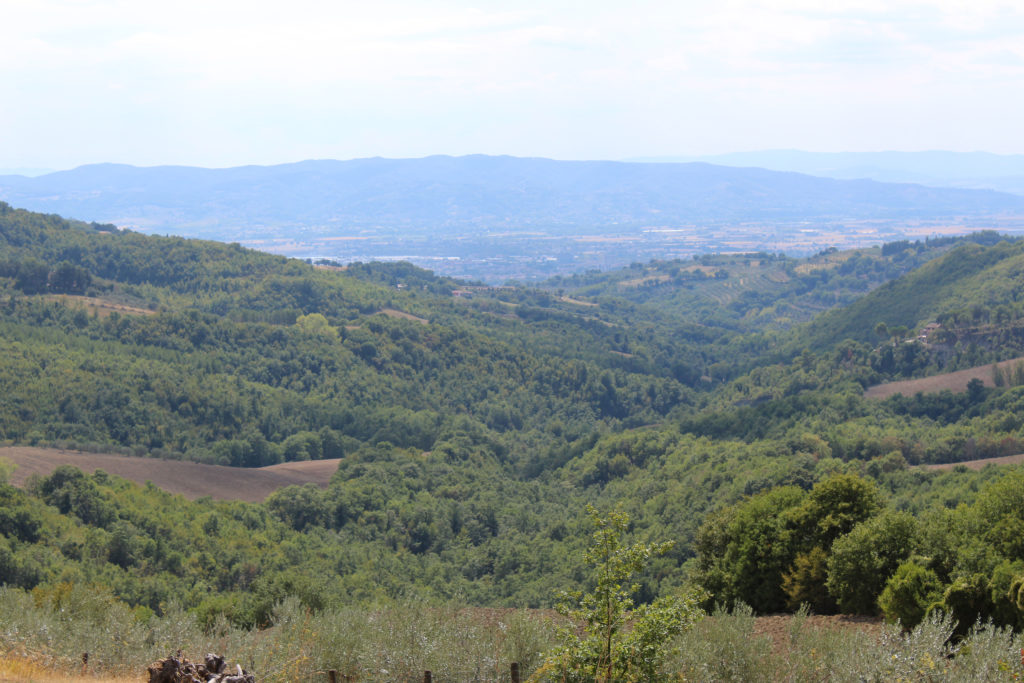 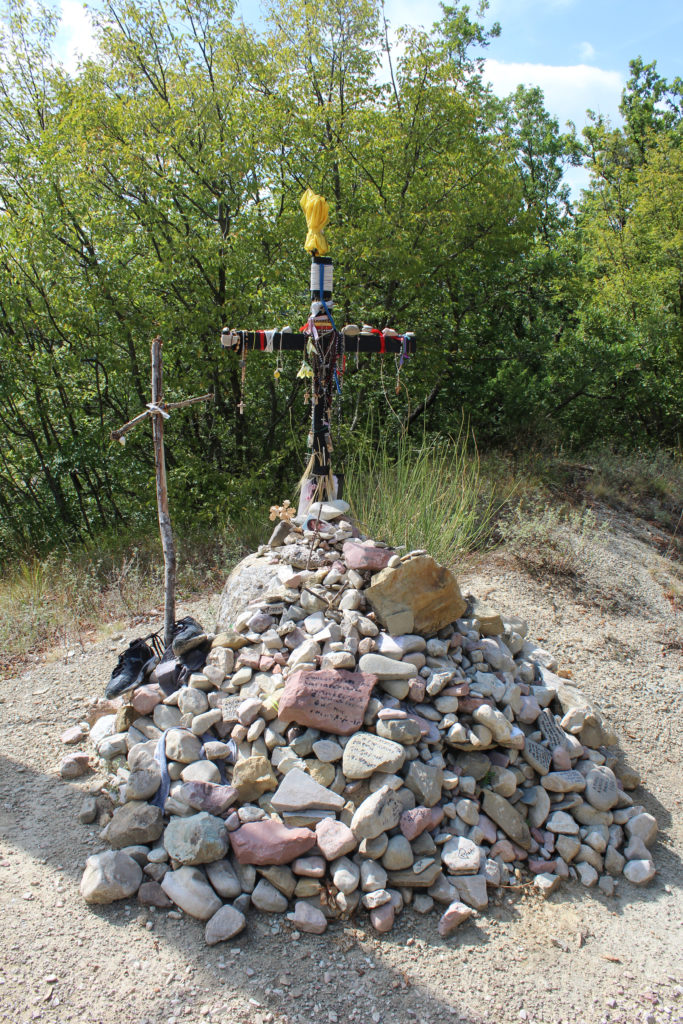 I go into the valley and start climbing soon after. It feels as if I’m rapidly losing strength. I pass a house and come to cross with a cairn of stones left by pilgrims at its foot. As with the shrine yesterday, there must be over a hundred crosses, rosaries and other items on the cairn. I take a stone and put it on the cairn. Looking south I see the Basilica of St Francis for the first time. The trouble is that the route feels as if it leads away from it.

After a brief contemplation at the cross, I carry on. I feel almost completely out of strength when I reach a watering point. I drop my pack and walking poles and fill up my water bottles.

The time is 15:03. I’m filled with anxiety and anger. How the hell did I get myself into this totally stupidly insane venture? I gulp down water and have to fill my water bottle again, spilling some water as I try to hurry to get ready to be on my way.

Something inside me snaps. It feels like I’m in the middle of nowhere, and totally alone. Some people cry. Some implode mentally. For me, the pressure of having to walk this great distance today creates a kind of anger overload. It’s a point of rebellion in a way very true to what Albert Camus described. I shall not be pushed any further. Enough is ENOUGH! It is pure rage. I let out a primal scream. May God hear me and see my anger. May He help me to deal with it.

I sit down at the fount. I don’t care how much there is still to be walked today, I am not moving one single inch further. The rest of the world can go to goddamned bloody hell. It’s too bad Niels isn’t around… Actually, maybe it’s a good thing. I might just murder him.