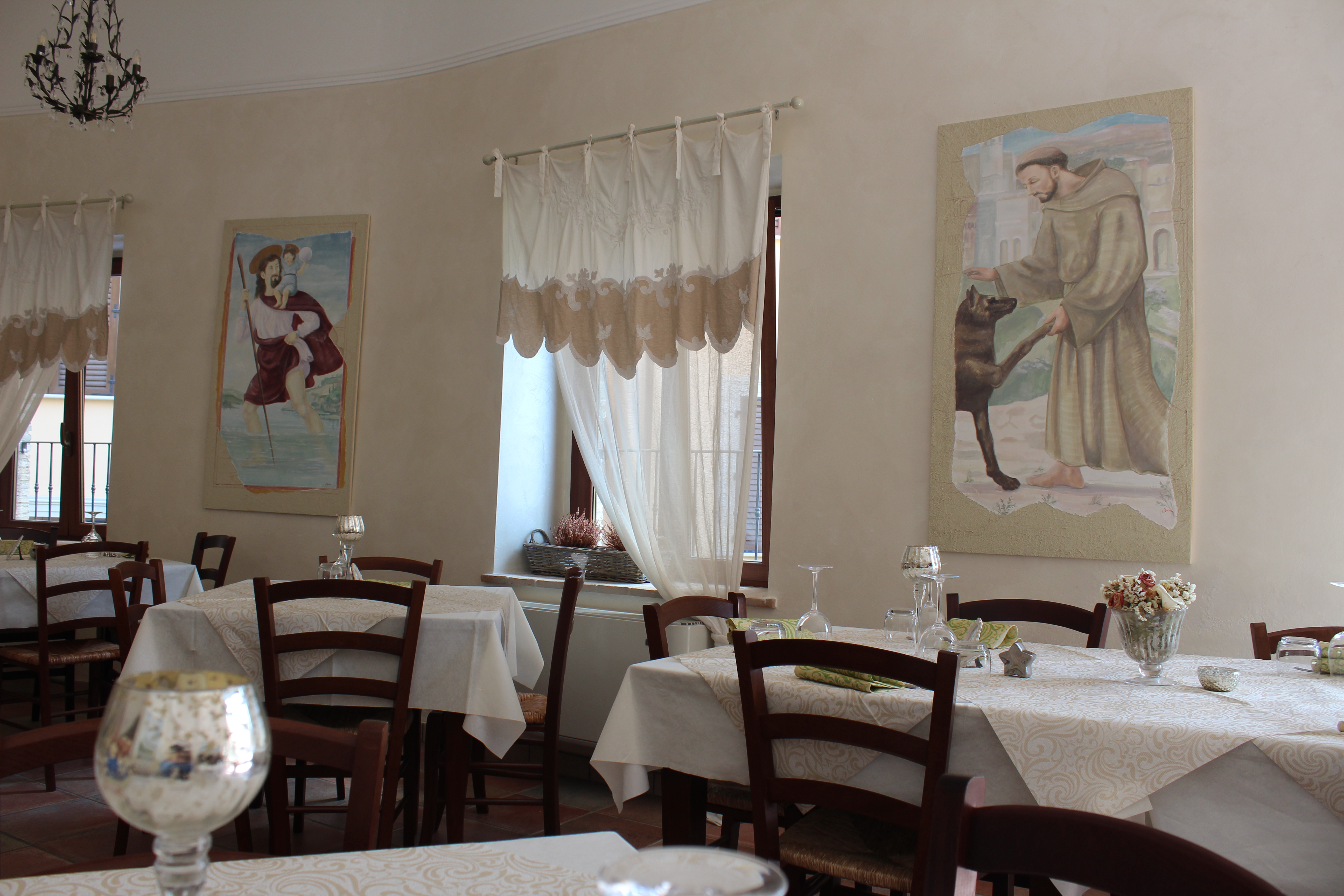 03 Apr Stage 14: The Frustration of a False Finish

6 September 2017, 06:30. The atmosphere in the chalet is tense as we get up. Niels’ attitude puzzles me. I’m still irritated about how he treated me last night. I take it personally, but I say nothing. The whole damn episode is bad enough to interfere with my ability to think straight.

We have breakfast – below average by Italian standards.

On the way back to the chalet, I’m filled with growing trepidation at the prospect of leading off on my own. The Swiss pilgrims pass me as they leave. I ask them what route they are following because it doesn’t look like the route I had in mind. Back in the room, we go over the route again. We agree that the shortcut along the road is a better idea than getting poggio flogged in the hills. I’ll meet Niels at the main bridge at the Chiascio river before entering Valfabbrica. If I get to Valfabbrica before him I can go to the La Rocca di Assisi hotel. I know he’ll catch up before then.

Instead of gathering the bedlinen for collection, I remake the bed. Again Niels, in typical condescending manner, points out the sign near the entrance of our accommodation. How could I miss it? It clearly instructs what is to be done. I nearly caused him to pay a 50 Euro fine. Now I’m really angry, but totally with myself.

Niels is adamant that I must go on my own. He wants to treat his ankle and warm it up before leaving. He wants to do as much of the route in one shot as possible. 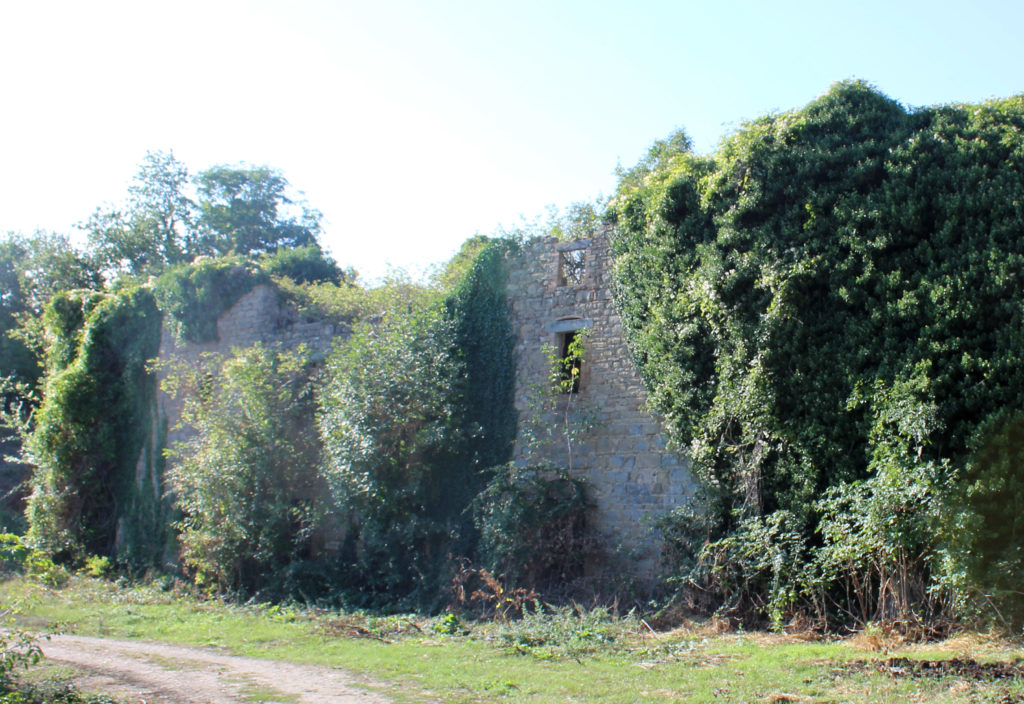 Castle in ruins Between Biscina and Valfabbrica. (Photo: © Henri Craemer)

I set off. Sufficient waymarks confirm the route. The road leads around Biscina Castle and descends into the valley. I immerse myself in the beautiful solitude. When I come to a creek, I cross on stones. I’m grateful to those who put wooden steps on both sides to ease the crossing. 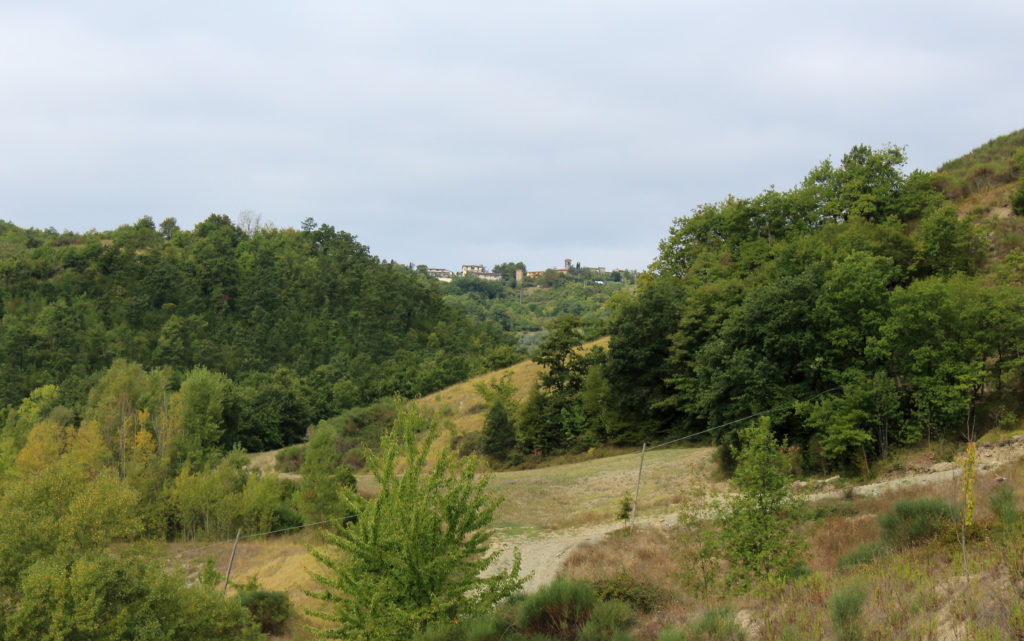 A Distant village on the route between Biscina and Valfabbrica, Stage 14. (Photo: © Henri Craemer)

The going is relatively easy. The rocky walkway becomes an easier dirt path. Then it becomes a two-track dirt road. I pass a fort and later a house, both in ruins. There are many ruins like these in Umbria, so it’s no surprise that neither are noted in the book. The road gradually descends, alternating between gravel and asphalt. Finally, I’m on the shortcut. Construction is very evident. I’m not quite sure what it is. It could be a new dam. In spite of intermittent cloud cooling the way, it’s still sweaty and thirsty going.

I know I have to keep going steady and fast as I can if I’m to meet Niels at the bridge as discussed. It still doesn’t prevent me from stopping to take photos. The cloud cover becomes more persistent. The Umbrian countryside is dead quiet. Every now and then I glance over my shoulder to see if he’s catching up with me.

Coming up to another bridge, I search for it on the map in the book. It’s not indicated. Then it strikes me what is wrong with this guide. There are too few important landmarks indicated on the maps, this huge bridge included. 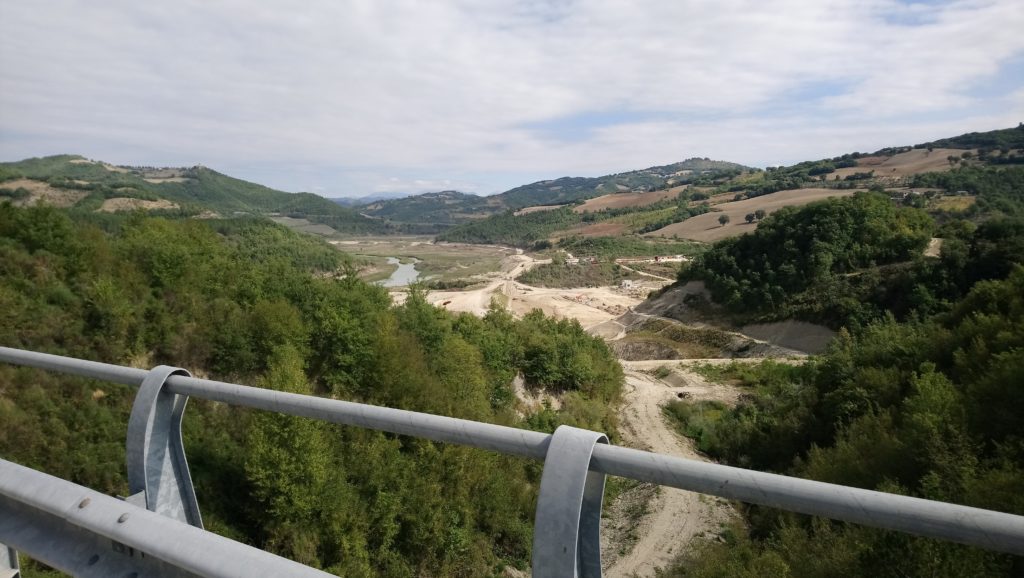 A view along the Chiascio Valley on the shortcut. Construction works on the Valfabbrica dam? (Photo: © Henri Craemer)

On with the road, I finally sight the Chiascio bridge. I look behind me, and there is Niels, cruising down the hill at speed. He soon catches up. We stop briefly and discuss how we’ll proceed. We look out for signs indicating The Way. There are none, so we cross the bridge.

Onward and upward along an asphalt road. Unknowingly we’ve already gone wrong. This becomes evident when we reach the SS318 highway. We must have crossed the wrong bridge. At least this will take us to Valfabbrica. Our progress along this road is very similar to the stretch along the highway on the road to Citerna. 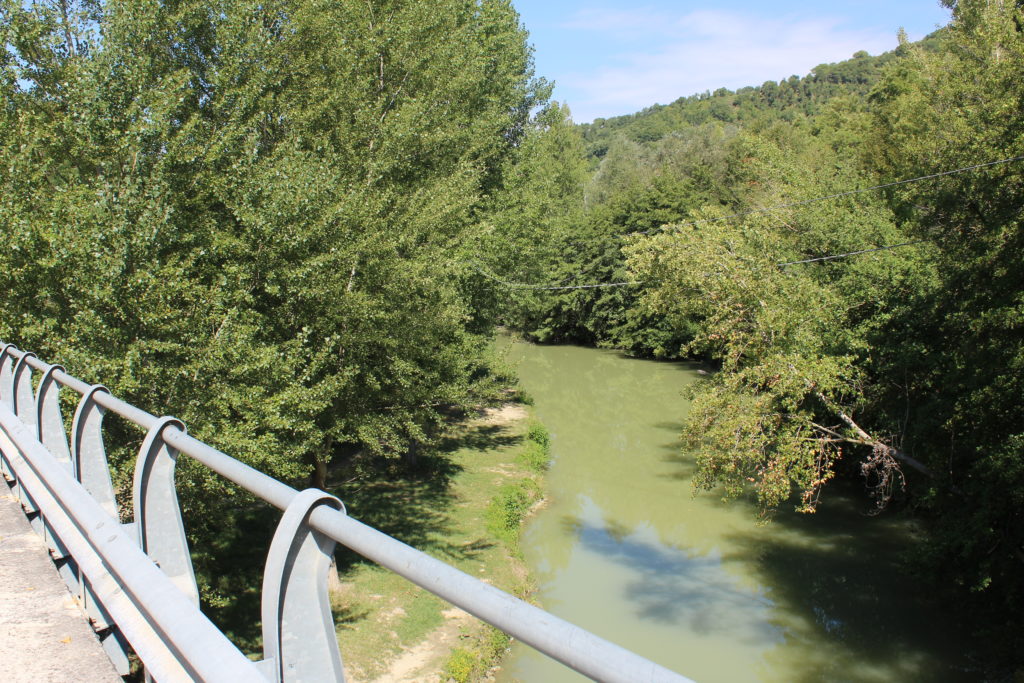 The Chiascio river from the wrong bridge (Photo: © Henri Craemer)

In Valfabbrica we easily find the Way of St Francis indicators again. Niels consults the GPS to find the hotel.

“I can only find a La Rocca di Assisi in Assisi,” he says.

“Let’s have lunch and then I’ll sort it out,” he says.

I agree. I’m exhausted, parched, and famished. All I want to do is rest and down some frizzante. We find a place, but it’s only 12:20, a bit early for lunch. With true Italian hospitality, the very friendly owner invites us in and says he’s willing to serve us if we’re willing to wait. Niels has two beers, and I down two litres of frizzante before our Spaghetti al Funghi arrives.

After lunch, we hoist our backpacks. Niels searches GPS and his instructions from Caminoways.

“I’m sorry, but we have to go to Assisi. That’s where our hotel is. Sorry, my bad,” he apologises. He turns around and starts walking.

Despair and total frustration overwhelm me. We’ve walked an entire stage and we’re hardly halfway. Well, I think to myself, if that’s the deal, so mote it be. God, please hear my prayers and help me. At least I’ve regained a little strength. I shall do what needs to be done.