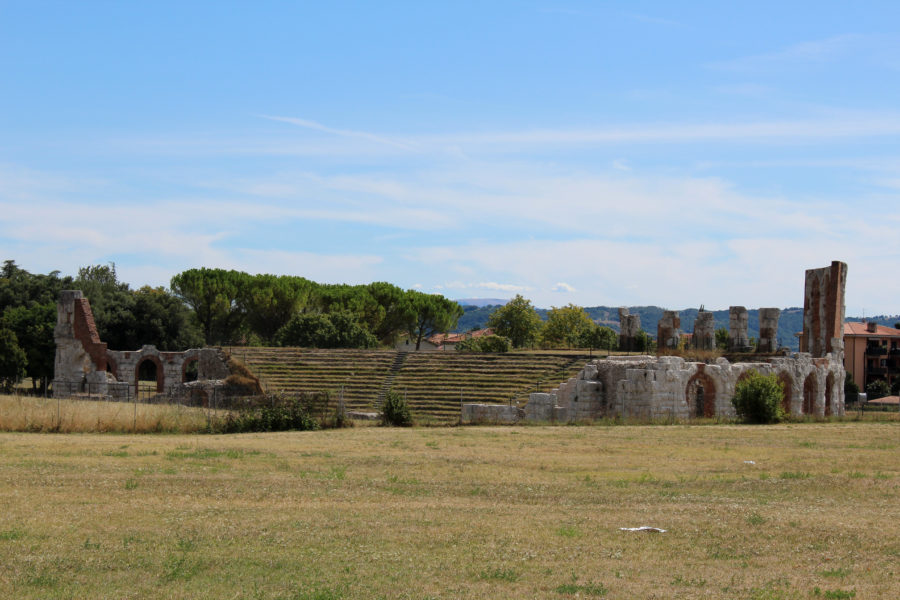 08 Mar Stage 12: The Trek from Pietralunga to Gubbio

4 September 2017, 04:20. I do my meditation and get back into bed for some more sleep. At 05:27 I awake. A few minutes later the alarm makes its first sounds before I kill it. That was a good night’s rest, not needing to worry whether or not my snoring or moving around has disturbed Niels. We have the snacks for breakfast that our innkeeper gave us. It will be a day where there is no place to buy food on the route, so we pack some of the snacks for later. By 06:50 we’re on our way. 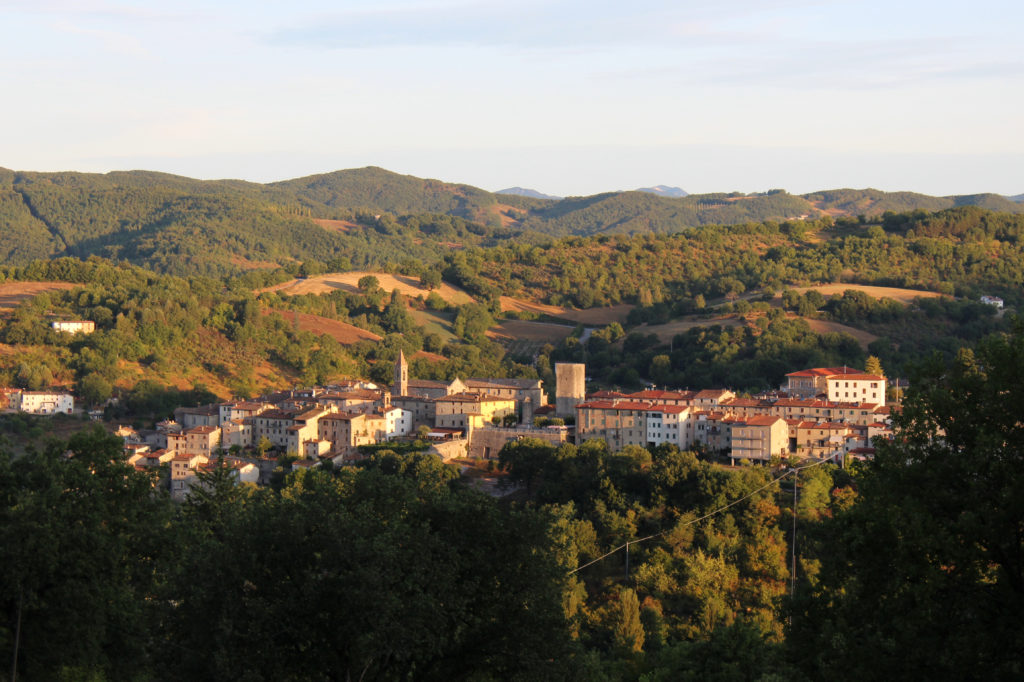 Pietralunga at sunrise, as viewed from the “shortcut”. (Photo: © Henri Craemer)

The night before the innkeeper’s husband explained how we can hike to the Via Francigena di San Francesco and pick up the trail bit further along via an alternative route. This shortcut would mean avoiding a significantly difficult ascent early in the day. There is no debate about this, we’ll take it.

By the numbers in Sandy Brown’s book we will be hiking 26.5 km* (minus the distance we score via the shortcut) with ascents and descents totaling 784m and 760m respectively. The rating is “moderate”.

I take a few last photos of our agriturismo. We’re off at a good pace, in spite of a considerable climb. At one point the sunrise hits Pietralunga like a searchlight – another breathtaking view of rural Italy. Niels’ impatience shows as he sets off before I’ve finished fiddling around to take photos.

In taking the detour we certainly did not miss out on any beautiful scenery. After a not too taxing descent, we rejoin the path in the vicinity of a poggio called Castello. However, we are both doubtful as to whether this route was actually shorter, although by comparing contour lines on the map, it seems a bit easier. 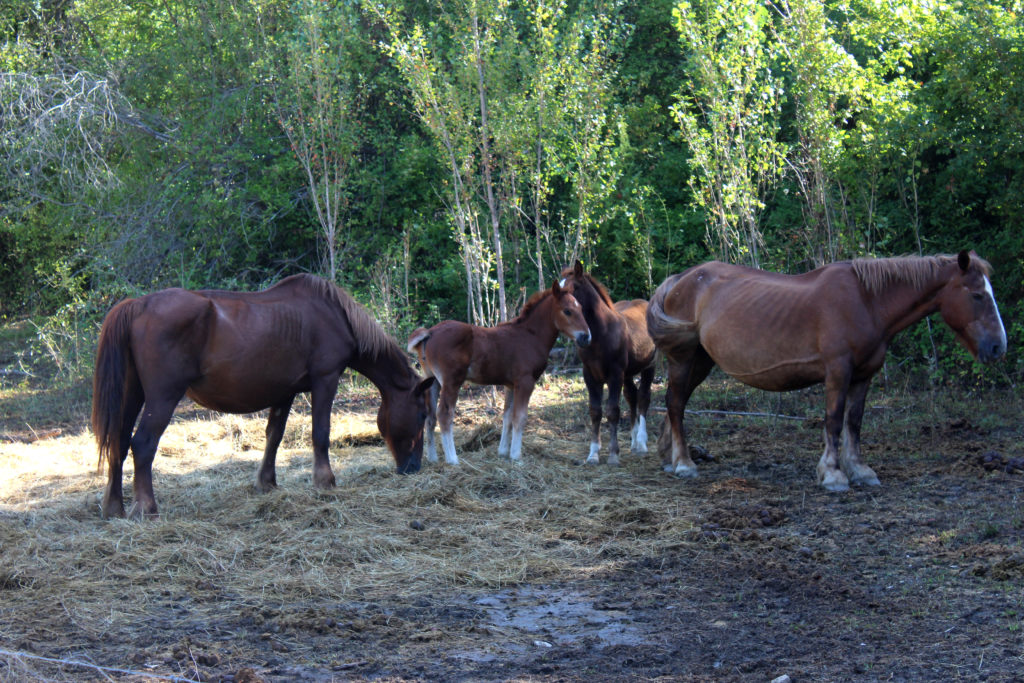 Niels is still pulling away from me, but I do notice an ease in my walking pace. I succeed in keeping him in sight most of the way. We started our pilgrimage two weeks ago from Florence. A week ago the Way of St Francis took us to Caprese Michelangelo from La Verna, I was already much fitter then, but nothing in comparison with today.

We pass a number of what appears to be deserted dwellings in the hills. Some of them may be old monasteries or villas.

After crossing a small creek, we come across a number of horses. In one group there are some pregnant mares and little foals. There is just one problem with any form of livestock, especially when you stop: flies that bite. This becomes particularly annoying when you try to take photos. If you keep moving they’ll just buzz around your head, but they won’t sit on you and bite. 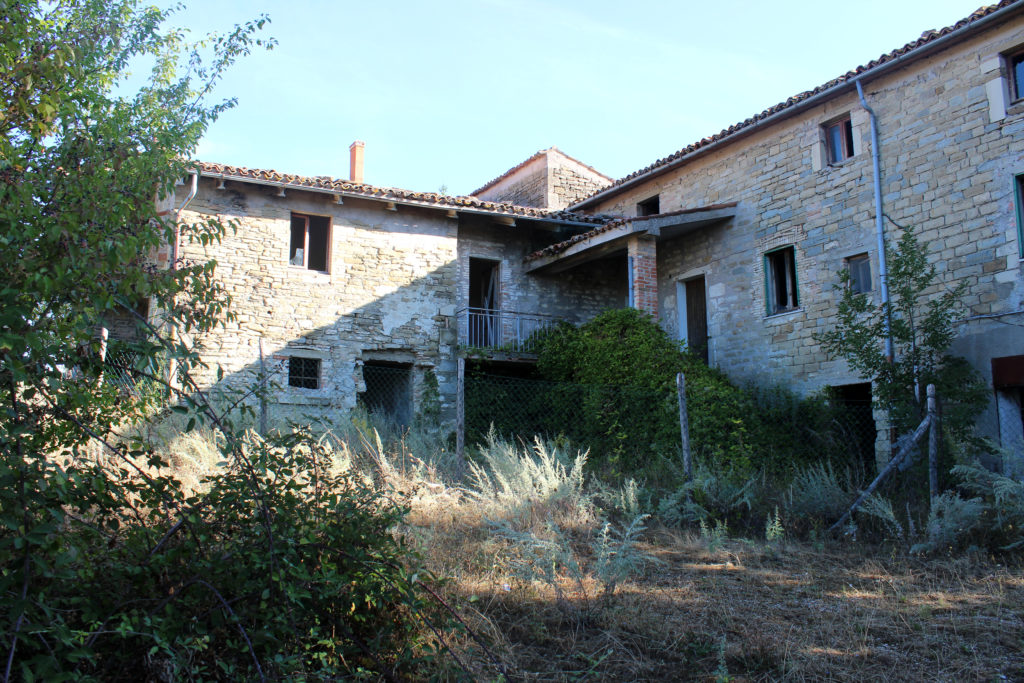 The derelict house with a fence around it. (Photo: © Henri Craemer)

One by one we mentally tick off the landmarks as we cross the undulating landscape: the fenced large derelict house, the intersection of the many trails in the area of Alto di Chiascio, two yellow houses, and our first sighting of the Chiascio Valley which gradually becomes more visible.

An interesting feature not noted in the guidebook is a small chapel with a cross that can be lit up electrically. We drop our packs and have the sandwiches we made in the morning. 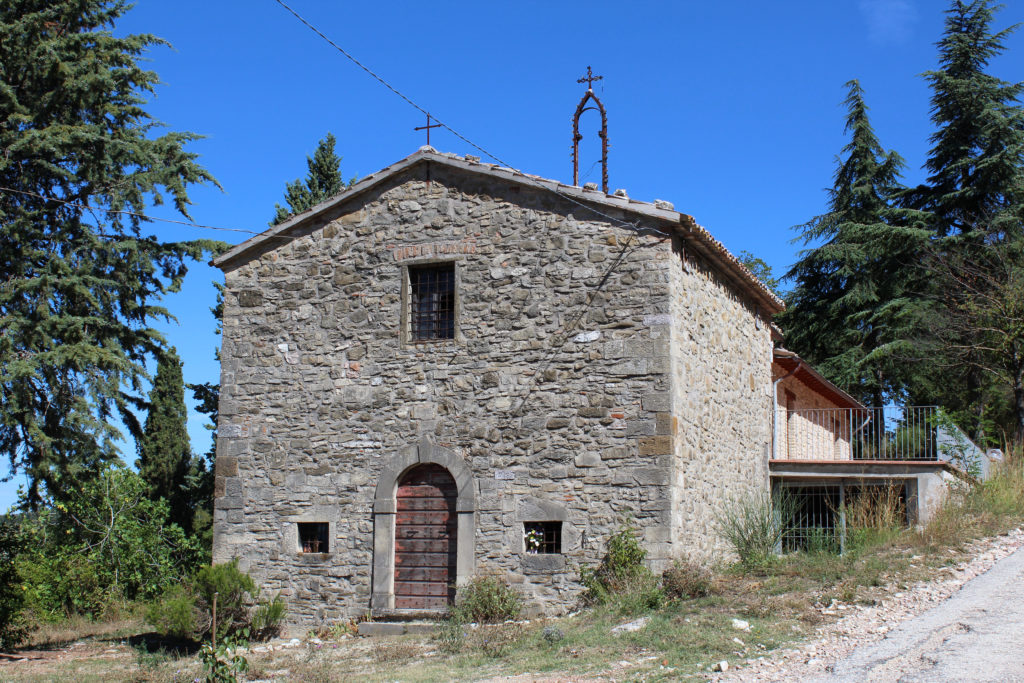 Chapel on the road to Gubbio (Photo: © Henri Craemer) 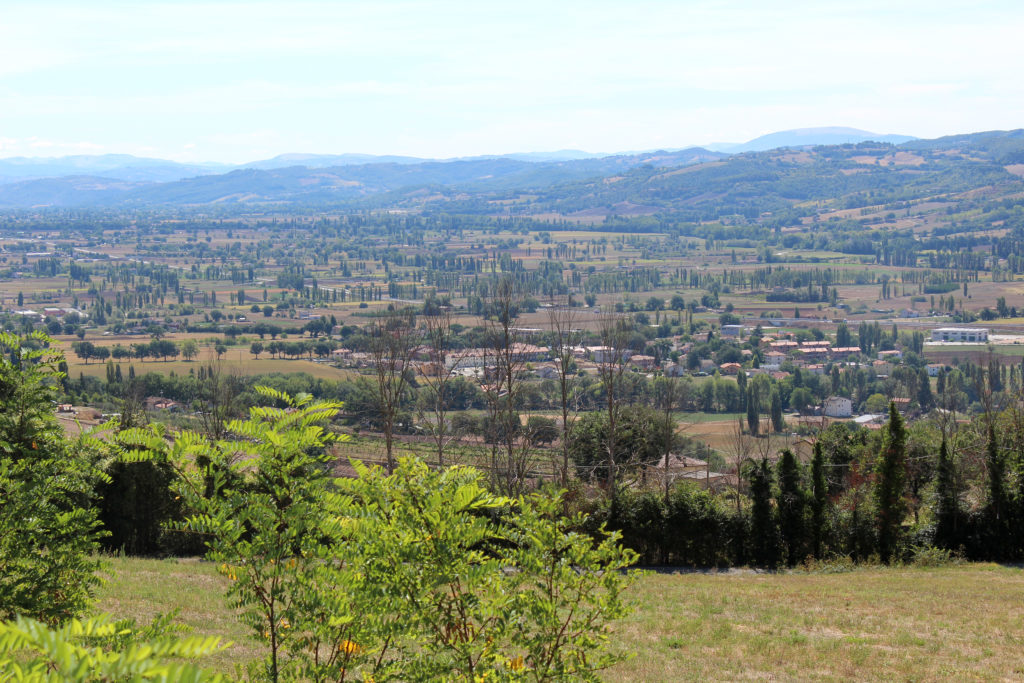 An Early view of the Chiascio Valley near Gubbio as seen from the hills (Photo: © Henri Craemer)

As the Chiascio Valley reveals itself we sight the Auto Strada (SS219) which we will have to cross closer to Gubbio, after passing through Monteleto with its small parish church. We begin a gradual descent into the valley. I realise how high up we were as we pass very tall cypresses which seemed completely dwarf-like when they first came into sight. 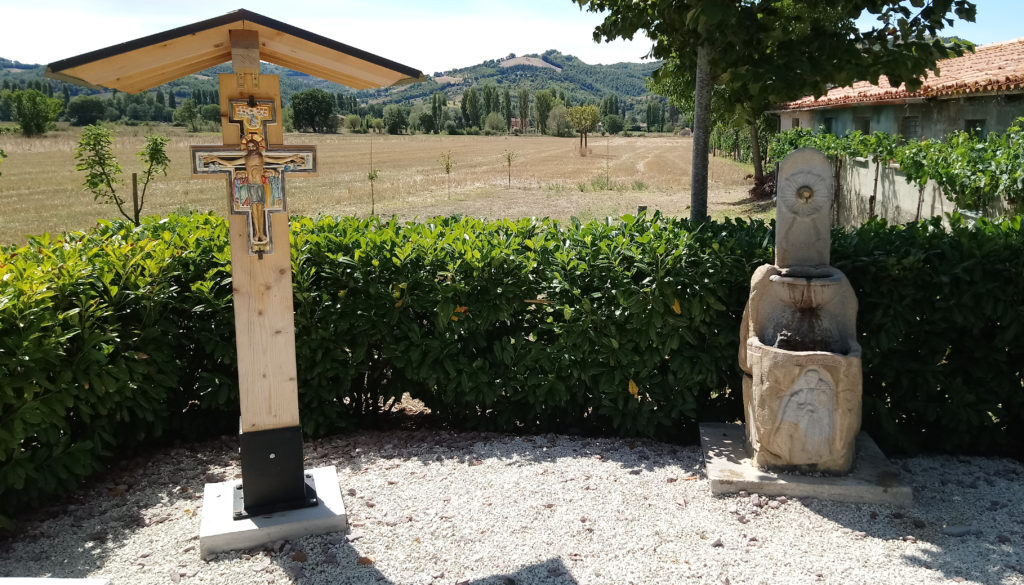 Another landmark not noted is a shrine and a watering point dedicated to St Francis. It’s found between two highway crossings shortly before entering Gubbio. I arrive just as Niels has had his fill of water. He moves on as I replenish my water levels.

The final landmark noted before entering the old part of Gubbio is the ruins of a Roman Amphitheatre – a mini-Colosseum (Featured Image). The Teatro Romano of Iguvium (the name by which Gubbio was known in Roman times) dating back to the first century AD.

Footsore and weary we make it into the town.