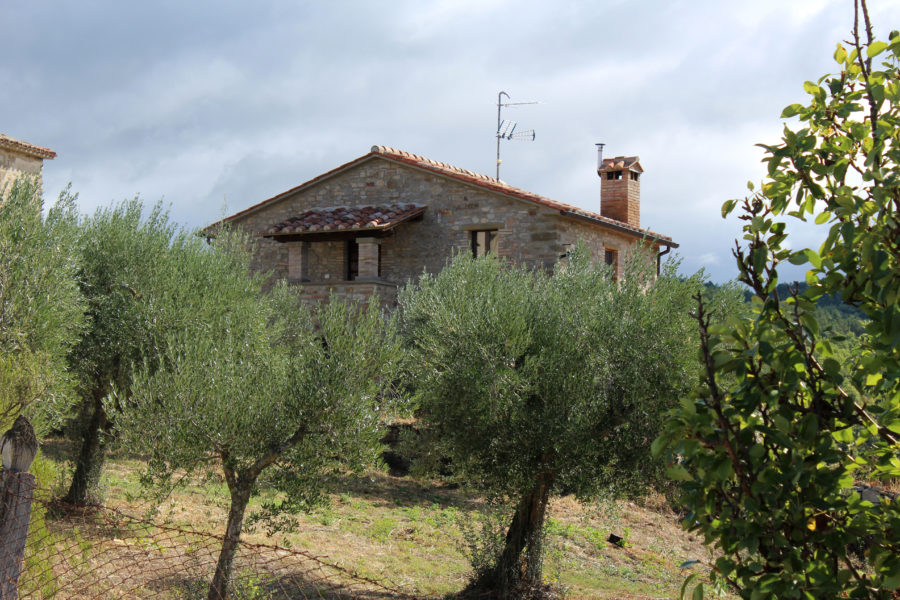 3 September 2017. Day 2 of Stage 11, Candeggio to Pietralunga on the Way of St Francis awaits. After breakfast, it’s arrivederci Città di Castello. We pack our packs into the car. The driver will take us to where our walk ended yesterday, and then take the backpacks to Pietralunga. We will only carry our daypacks for the 17 km*. There was rain the previous night. Temperatures are significantly lower and there is a distinct possibility of more rain. Thus, we’ve packed raincoats and hoodies.

Our ride ends. We unload. Niels pays the driver. From his reaction it seems as if the fee is a lot more than generous.

“Buon camminata,” he wishes us.

“Arrivederci.” He speeds off to Pietralunga. I get the impression he’s sad to see us leave.

Suddenly there is silence. Not even the gloomy atmosphere due to the cloud cover can detract from the beauty of the Umbrian scenery. 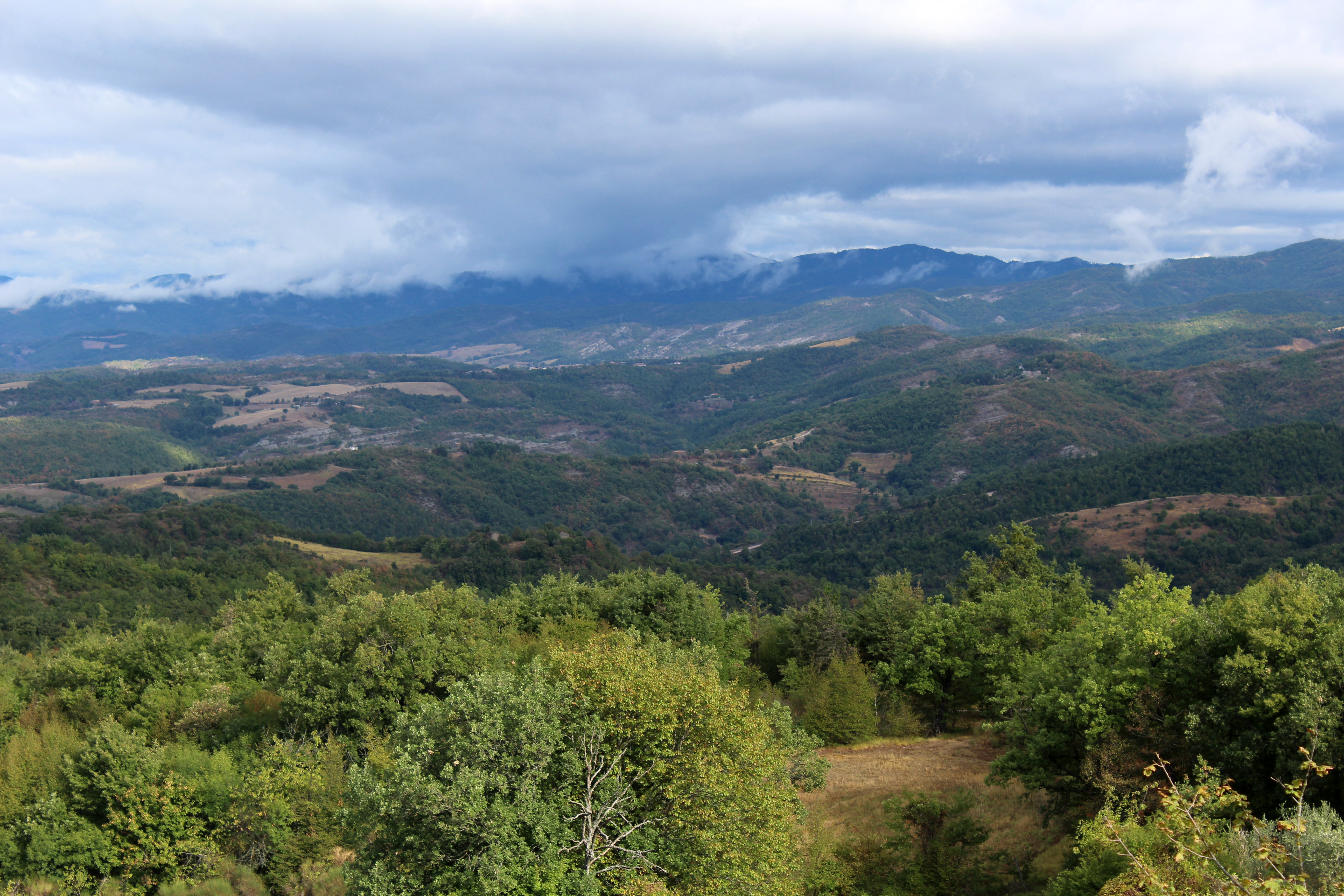 Walking in a patch of sunshine on a cloudy morning in the Apennines. (Photo: © Henri Craemer)

I sigh as Niels takes off at his natural pace, so much faster than mine. None the less I manage to mostly keep him in sight. It’s still early. My pack is light, so I feel no strain. At least the road is clear with enough waymarks. It’s not long before there’s a break in the clouds. We find ourselves walking in very pleasant sunshine.

Our route traverses from Monte Casale to Monte Santo Stefano. Niels waits for me at a driveway. An old man – possibly a pilgrim with a little backpack – is having a rest, smoking a cigarette. I look at the map. Isn’t this where the ancient fourth century church of Pieve di Saddi should be?** All I see is an old building, possibly a home of sorts. The written instructions contradict the map. The route description puts Pieve di Saddi after Monte Santo Stefano. 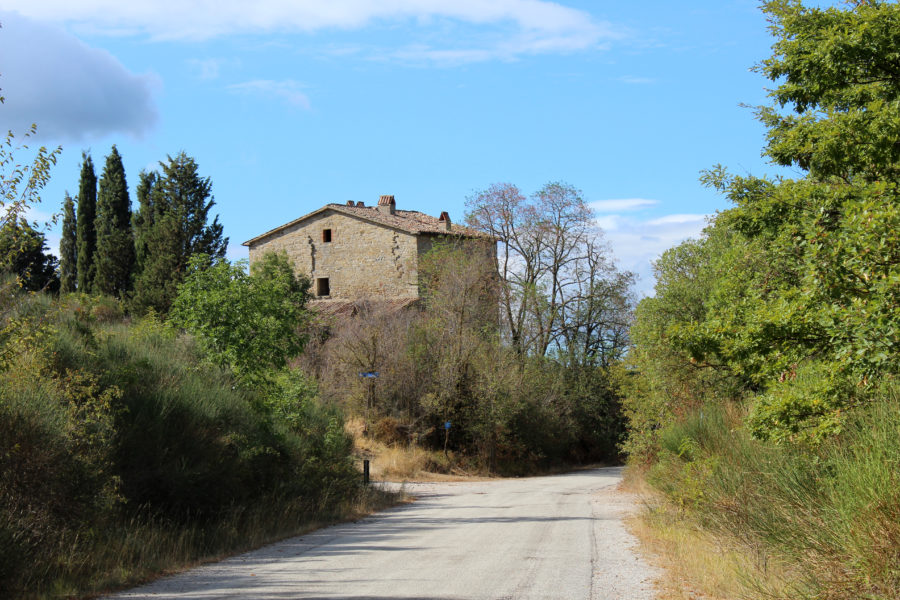 The ruins of an old house where we expected to find Pieve di Saddi according to our map. (Photo: © Henri Craemer)

The gravel road has little pothole pools of water. A very rare sighting of a deer, running across the road presents itself. It disappears into the forest. On the descent from Monte Sante Stefano, Italians walking their dogs confirm that we’ve just sighted Pieve di Saddi. It’s not nearly as big as any of the other churches we’ve seen, but its location gives it an imposing look.

Someone is sitting outside reading a book. We drop our packs. I spend a few minutes recovering from the walk. The water goes down well. 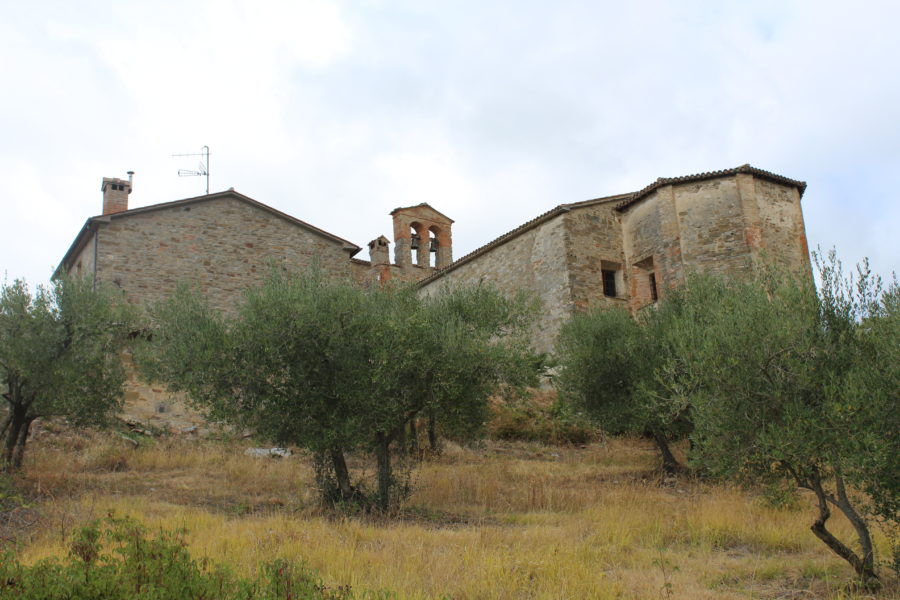 I enter the church and the atmosphere overcomes me. My meditation seems all too brief (see blog post: Meditation in Pieve di Saddi) I go outside again.

Niels talks to the man who was reading the book. He is indeed a pilgrim. Unfortunately, he has injured his leg. Niels offers him some medication which he turns down. Unlike us who have to be in Pietralunga this afternoon, he can stay there until he recovers.

After some seed crackers, almond brittle, and water we move on. A fine drizzle besets us. It lasts just long enough to force us to put on our raincoats. Then it stops. I just smile.

The hiking continues. After a gentle descent, we start climbing again. The forest gets thicker. The waymarks and gravel road remain clear. At least this helps my confidence about being on the right track.

The steepness of the ascent increases. So too does my need to rest. Just when I think I’m fit enough, I’m cut down to size by the path. I set myself small targets and force myself not to rest until I’ve reached them. We pass the Agriturismo Il Pioppa Casa. 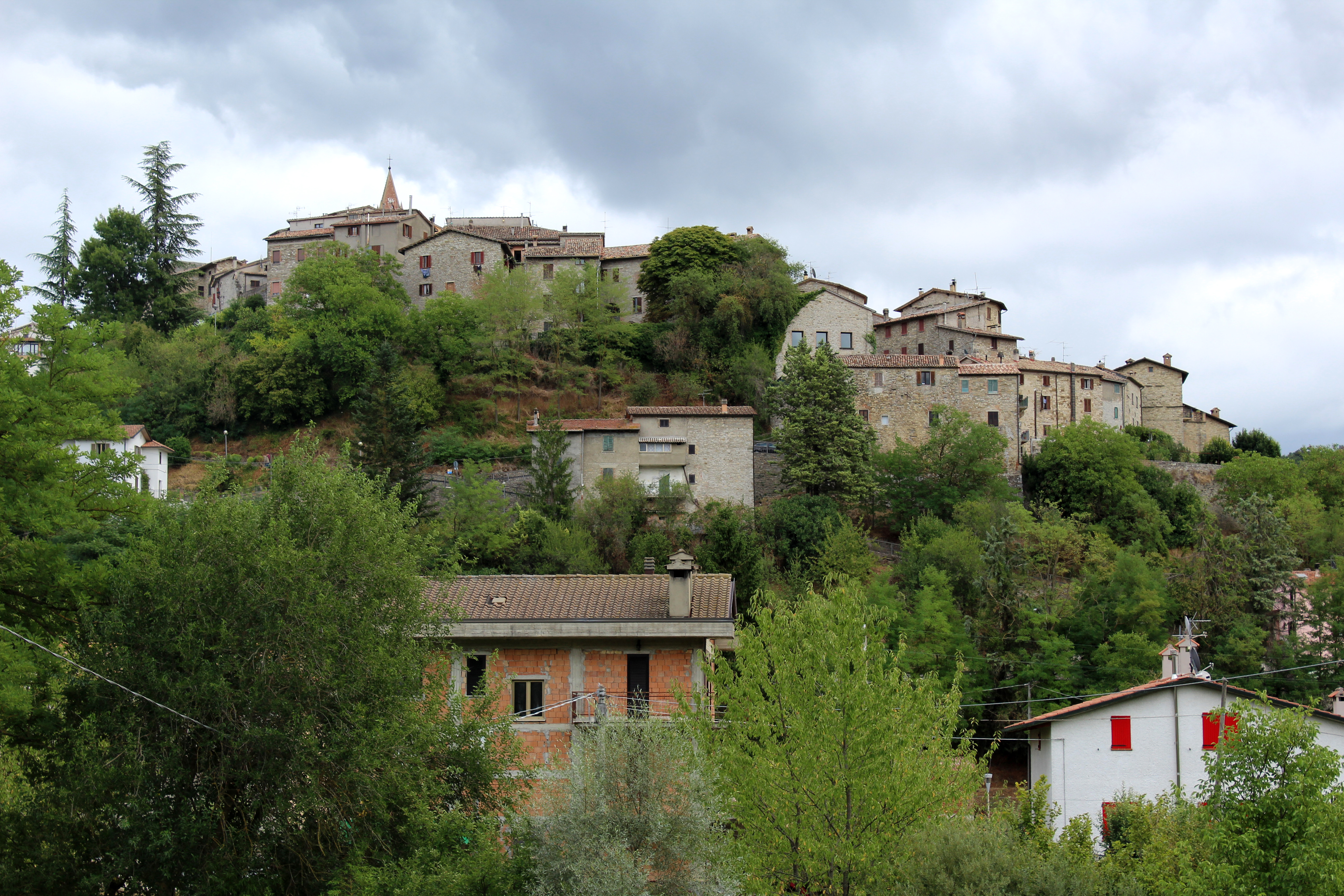 Ascent into the old village of Pietralunga. (Photo: © Henri Craemer)

The road descends and crosses a creek. Another climb tests my resolve even more so than the one just before it. Somehow, I manage. Niels waits for me at a crossroad at the crescent of the ascent. We gain our first sighting of Pietralunga – a beautiful little town draped on the side of a hill. I’m really tired, and a bit despondent at what remains. It’s another descent into a valley, and then a very steep ascent into the town.

From the valley we ascend via stairways, switchbacks, and along steep narrow streets to the main piazza at the centre of the old village.

We find a place that serves the most wonderful tagliatelle. Niels has his regulation beers, and I polish more than 2 litres of frizzante. All that remains is a relatively short walk to our agriturismo, and we’re home and dry for the day.

** The map has subsequently been corrected in later editions. Find the correction here: https://caminoist.org/2017/12/31/just-in-2018-updates-to-the-way-of-st-francis-guidebook/