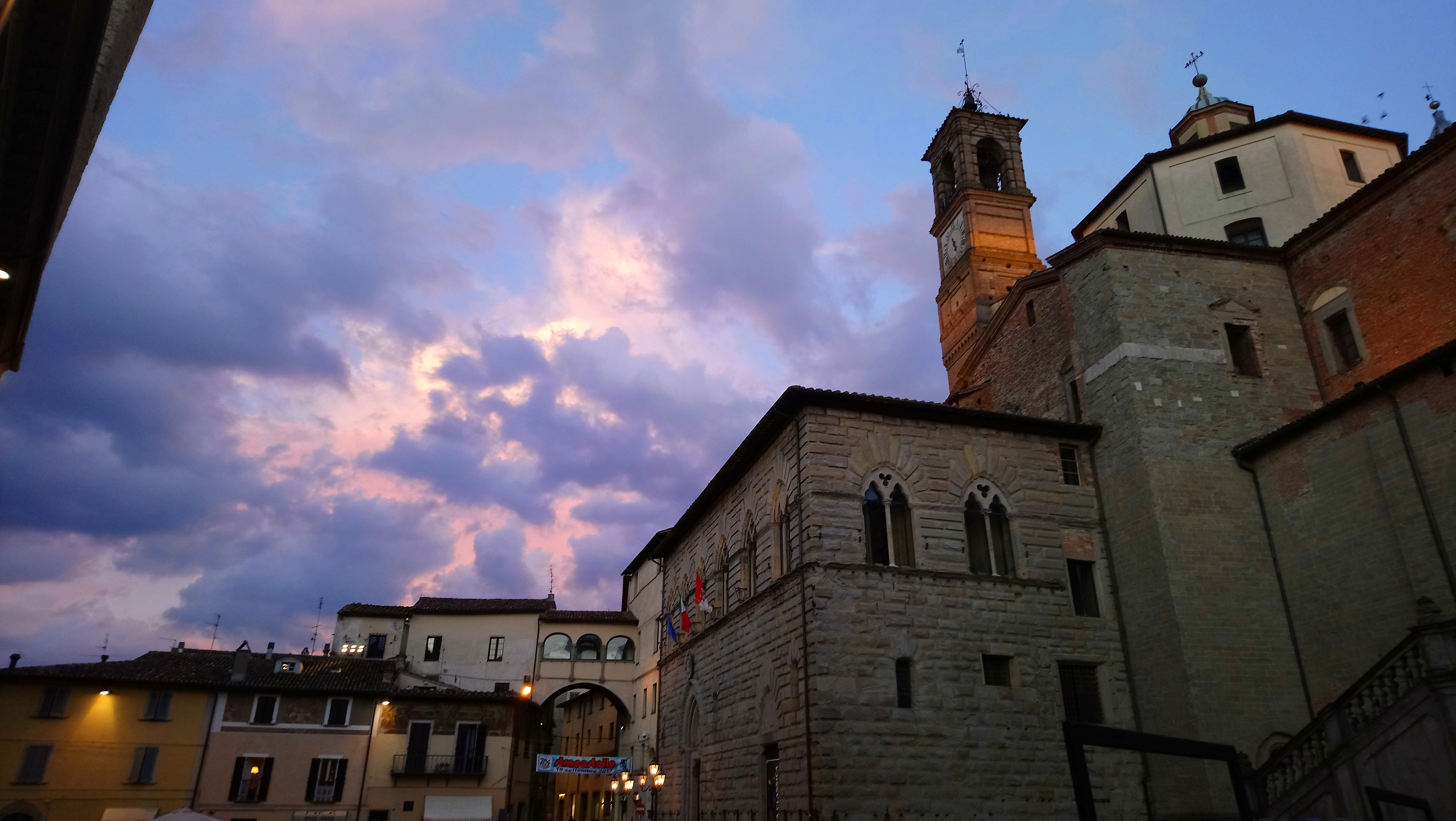 Thursday 31 August 2017. The shortcut from Citerna to Città di Castello must have shaved at least 90 minutes off the day’s trek. Hence our early arrival. We clean up and hit the town. It’s the biggest town we’ve been in since leaving Florence. It reminds me a bit of Pontasieve at the end of Stage 1 of the Way of St Francis. It has a dusty air of decay to it, a bit like an overworked peasant woman who can do with some freshening up.

Walking the streets, we find many interesting little twists and corners between high walls. It feels as if we’re systematically getting more lost. Niels explains that the streets were laid out this way to form part of the city’s defenses. 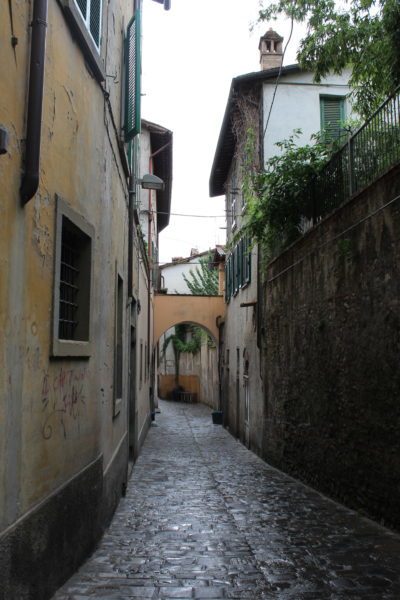 I can just imagine an invading medieval army trying to get past the massive fortified outer wall. Even if they did, hard times awaited. They could be ambushed around many corners where relatively few defenders could hold them off. The citizens could rain down death from the surrounding high walls.

There are many arched passageways across alleys. According to my extremely well-read friend, these often bridge the way between a convent or a monastery and a church. This allows the nuns and monks to cross, in a way that they’re not defiled by the secular world.

We decide on having refreshments at Caffe Magi on Piazza Venanzio Gabriotti. Opposite us is the Cathedral of Saints Florido and Amanzio.

The atmosphere is oppressive. I sit and occupy myself with people watching. They look tired. I’m not surprised. It must be the heat. This is also the most young people we’ve seen in one town along the Way of St Francis. They look bored.

It’s a somewhat strange feeling to sit watching all these people and know that each one of them has an entire world of their own. In their world I’m merely an extra in the background, having frizzante on a Thursday afternoon in a town in Italy. They too are dots in my landscape. There is a recently described emotion known as sonder to peg this feeling. 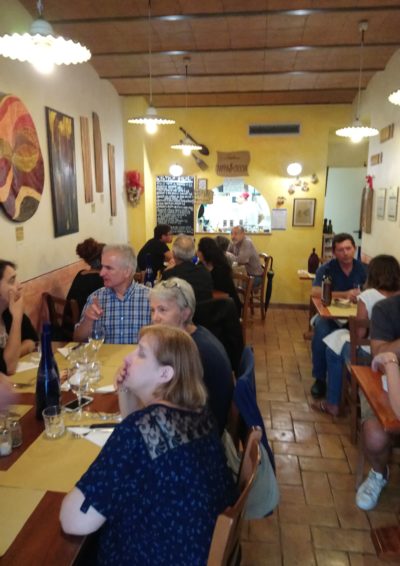 We bide our time until supper. Niels has excellent instincts when it comes to finding places which offer the best gastronomic experiences. He finds an absolute gem called Pappa e Ciccia. It’s a tiny place that looks like the type where, in earlier times, you’d expect Ernest Hemmingway to walk in. A simple pasta dish with spinach and feta, made brilliantly well, is part of another wonderful day in Italy.

We return to our hotel. There is another cracking thunderstorm. Will we be walking in the rain soon? For now, the rain is most welcome.

Friday, 1 September 2017. I’m hard-wired to wake up at a certain time for my morning meditation. I do it and get back into bed for a nice late morning on a rest day. I’m woken up by the sound of thunder. After breakfast, we go into town for some provisions. Most importantly we replenish the blister plasters, since I’ve used up practically an entire pack since starting the trek. I also get new Scholl insoles in an attempt to remedy my blister problem.

Lunch at Pappa e Ciccia is fantastic. We wander through the town and see some of the sights.

It’s around 17:00. We arrive at Caffe Magi, just in time to avoid an afternoon thunderstorm. This reminds me of my hometown, Johannesburg (South Africa) where we have huge cloud build ups before all hell breaks loose. It rains hard for a short while, with some thunder and lightning. Then it clears, with a beautiful display of light on the remaining clouds (see the featured image at the beginning of this post).

I am amazed at the effect the rain has on the populace and the environment. Everything seems washed clean. The peasant woman has had a bath and put on clean clothes, suddenly making her much more attractive. The people are suddenly livelier. 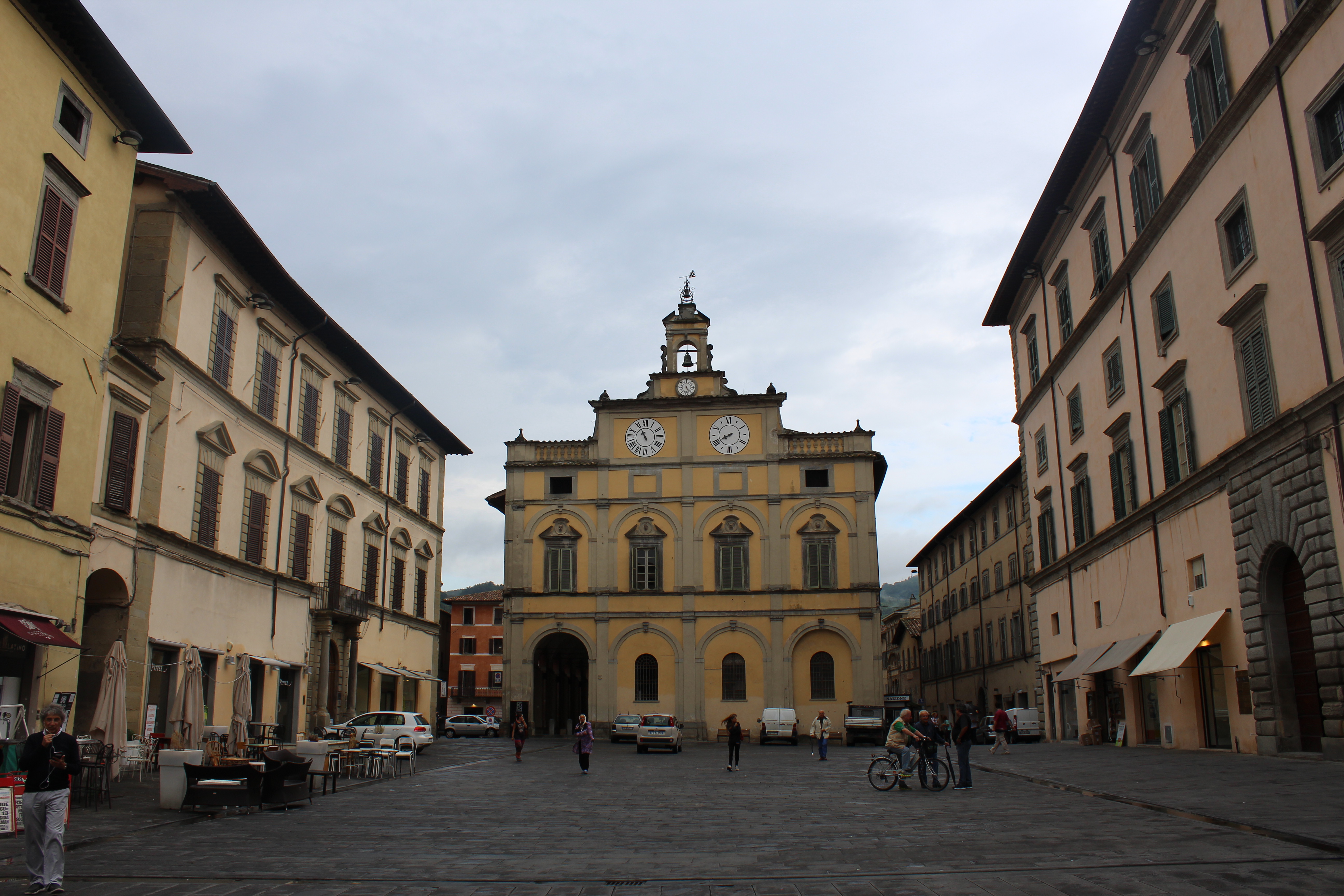 We find a place to have supper – too touristy, too busy, service way too slow. The food is below par for Italy. That means it’s still great, but we feel we could’ve done better.

Passing through the foyer of Hotel le Mura we see the Italians are watching football. The Azzurri football team is playing Spain. It doesn’t go well for them, making for a very quiet Friday night in Italy.