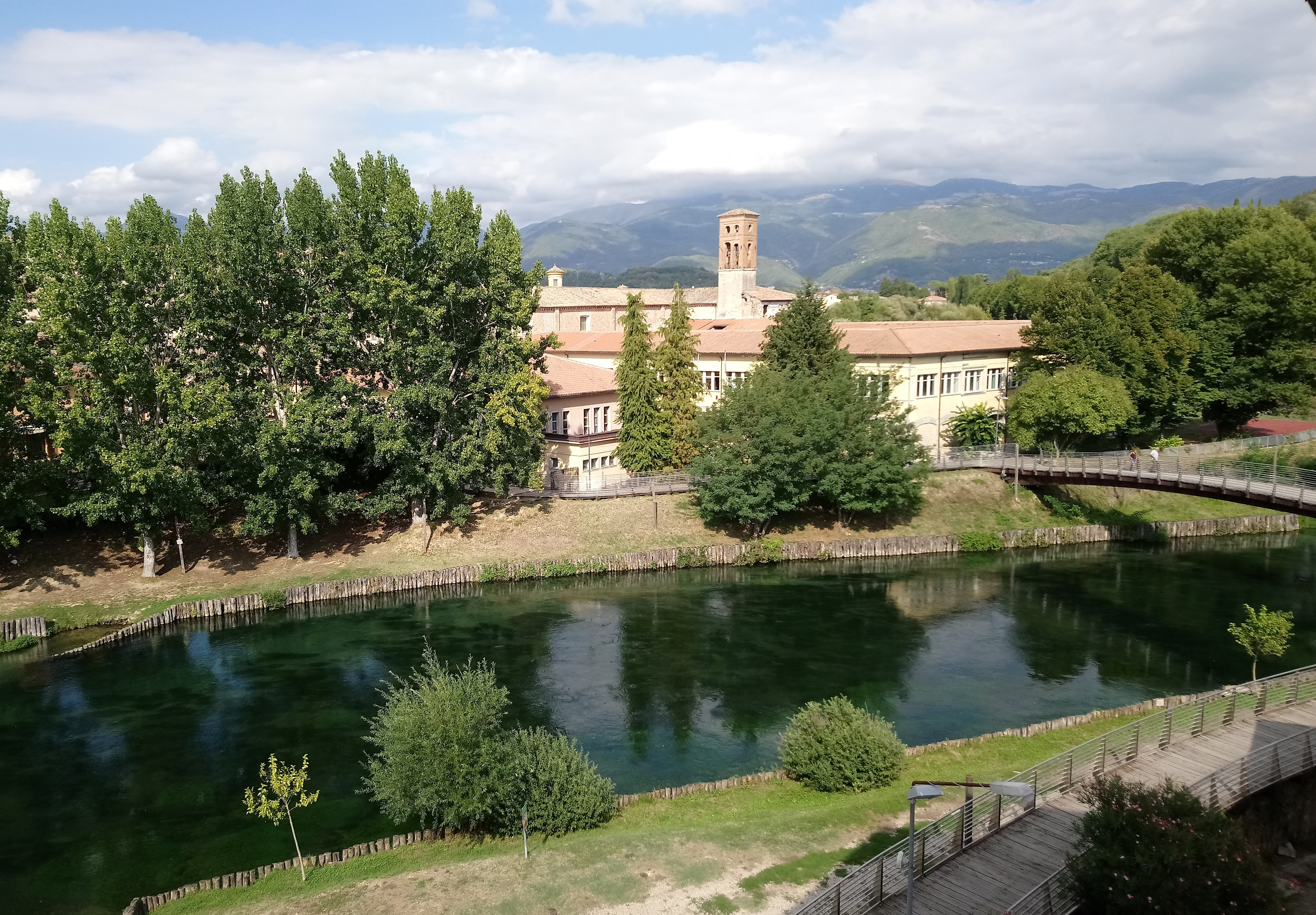 15 September 2-17, 14:30. It’s a quiet Friday afternoon as if Rieti is already in weekend relaxing mode. The place where we decide to eat is close to Hotel Cavour on Piazza Cavour. A wide variety of people mingle on the piazza. We take an outdoor table overlooking the piazza.

The relief of taking the weight off my feet is huge. I can feel my toe throbbing from the cut caused by the nail of my little toe. Fortunately, the pain eases. The niggle in my groin also goes away.

A young girl, probably related to the owner, takes our order in English. A few minutes later the owner comes to negotiate a change in our order because it’s too close to the pre-supper closing for what we would like. Niels and I aren’t fussy eaters, so the problem is quickly solved. While the mamma takes our order, the girl mimics her behind her back. We just smile.

We finish our meal and wait for the bill. Mamma owner comes to talk to us. She asks us where we’re going.

“Pellegrini a Roma,” I attempt some Italian. Fortunately, her English is much better than my Italian. We tell her of our trek so far and our plans for the rest of the journey. She seems very impressed with us and wishes us “Buon Camminata” for the rest of our walk.

After she leaves Niels tells me that older people are more likely to understand what is behind a pilgrimage. He also saw this on the Camino Portugués. Youngsters are more likely to think the idea of hiking 550km from Florence to Rome is ridiculous.

Some haggard people beg for money on the piazza.

“Gypsies,” says Niels. His disgust is clear. “Brilliant musicians and artists, but they’re a curse in large towns.”

He warns me about the danger of gypsies. They are also master thieves and con-artists. Their skills at pickpocketing are legendary. A common scam is to ask you to hold a baby. Some won’t hesitate to even throw the baby at you. While you’re catching it or looking after it, they will go through your backpack. In a flash, you’re minus your passport, cash, and valuables. He adds that they often work in teams.

Another scam they pull is to pretend they’ve picked up something valuable that you’ve dropped. If you’re stupid enough to claim it as yours, your problems have only just begun. They will watch you and ambush you a bit further along the way. Then they will accuse you of stealing the object. They will also threaten to report you to the police if you don’t give back the object and pay them to keep quiet.

For the first time since the odd hawker in Florence, I see Black Africans who are not tourists. Three youths, loitering on the piazza, stand out like a sore thumb. By their looks I peg them as probably west African. Like most other youths who have nothing better to do, they are glued to the mobile phones. Occasionally they talk to other white youths.

After our late lunch, we check into the hotel. While Niels is in the shower I start repairing my foot. The cut doesn’t look too deep. As I clean it in the shower, it starts bleeding again. I take care to clean the cut carefully. The last thing I want is an infection that turns nasty. Niels met someone on his previous Camino who had severe problems due to an untreated blister. The doctor who finally saw him after things got too bad, banned him from hiking because he was on the brink of getting gangrene. That would certainly end my walking. After the shower, I give all my nails a thorough clipping.

Niels and I are in quiet contemplation when we notice something disturbing. The Africans we saw on Piazza Cavour are set up across the river, right next to a school. They are either living there illegally, or they’re encamped for tonight. Teenagers arrive at regular intervals. It’s very clear that some shady transactions are going down. There is a greeting and a handshake – the type typically used to disguise the exchange of money for drugs. Another African would go and fetch something. It’s another handshake and the visitor leaves.

This sight angers both Niels and me immensely. My feelings turn from anger to sadness. Is this the best that Africa can offer the rest of the world? It’s a total disgrace that there are so many countries in Africa where the best thing to do, is to get out. Then, when they do get out, refugees turn to illegal means of making money, like these three little drug dealers.

Being from South Africa, I’m familiar with the refugee problem. During the post-apartheid boom many refugees from African countries flooded into the country. Currently, my country is not a happy place. Crime and government corruption have escalated to levels unheard of before.

After having our drinks, we cross the Ponte Romano to do some essential shopping. for the coming stage of the walk. The bridge was rebuilt after World War II next to the ruins of an old Roman bridge. Rieti was another Italian town that saw severe bombing from the Allied forces during the War.

Both Niels and I have recovered from the day’s hike. We’ve shaken off the pilgrim shuffle for today. My foot feels fine and there are no after effects from the cut.