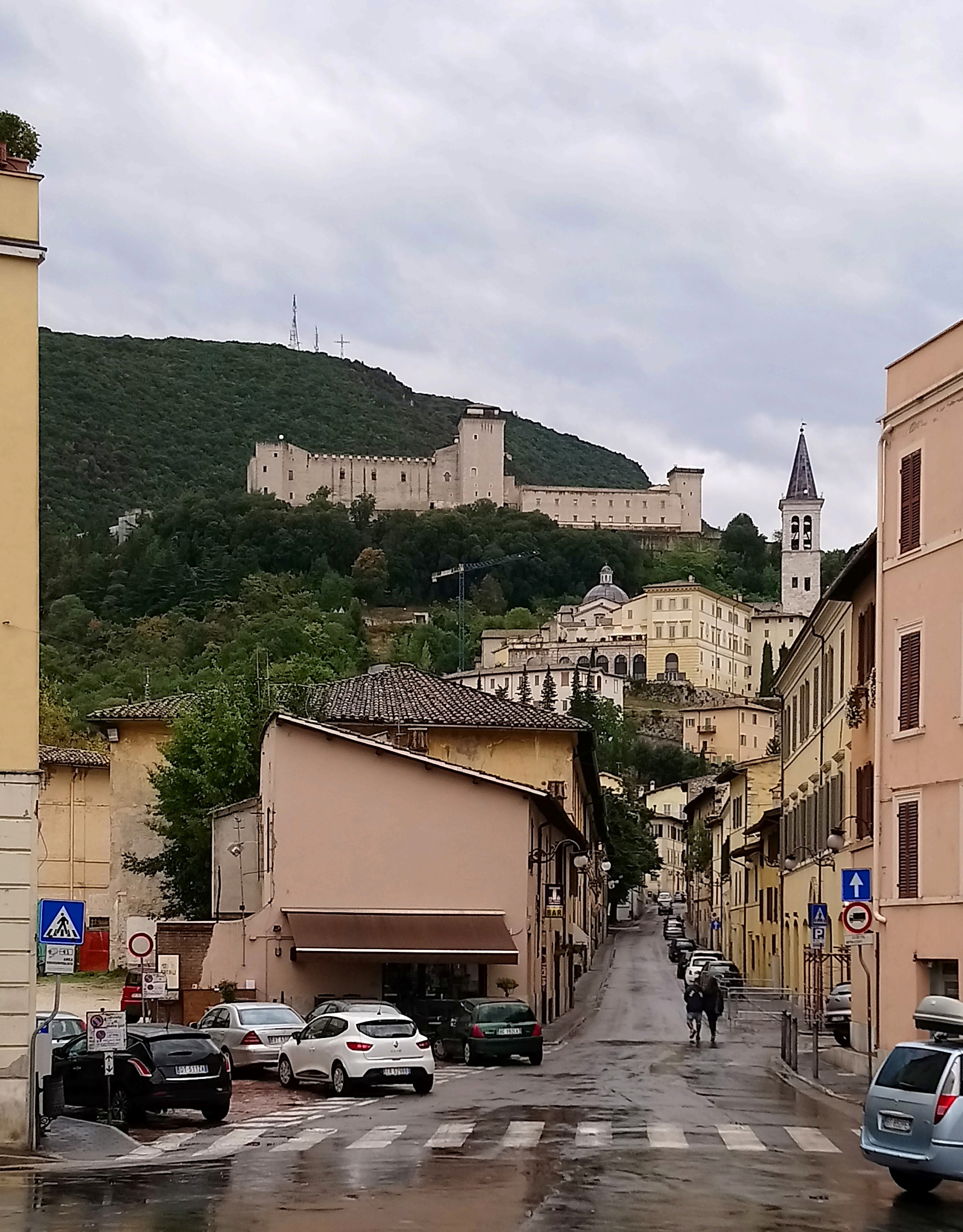 20 May Scratching the Surface of Spoleto’s Heritage

A few minutes after 15:00 Niels starts getting ready to go sightseeing. I’ve surfaced from a very fitful meditation. I’m ready to join him. We look at the map he got from reception and decide how to explore Spoleto. 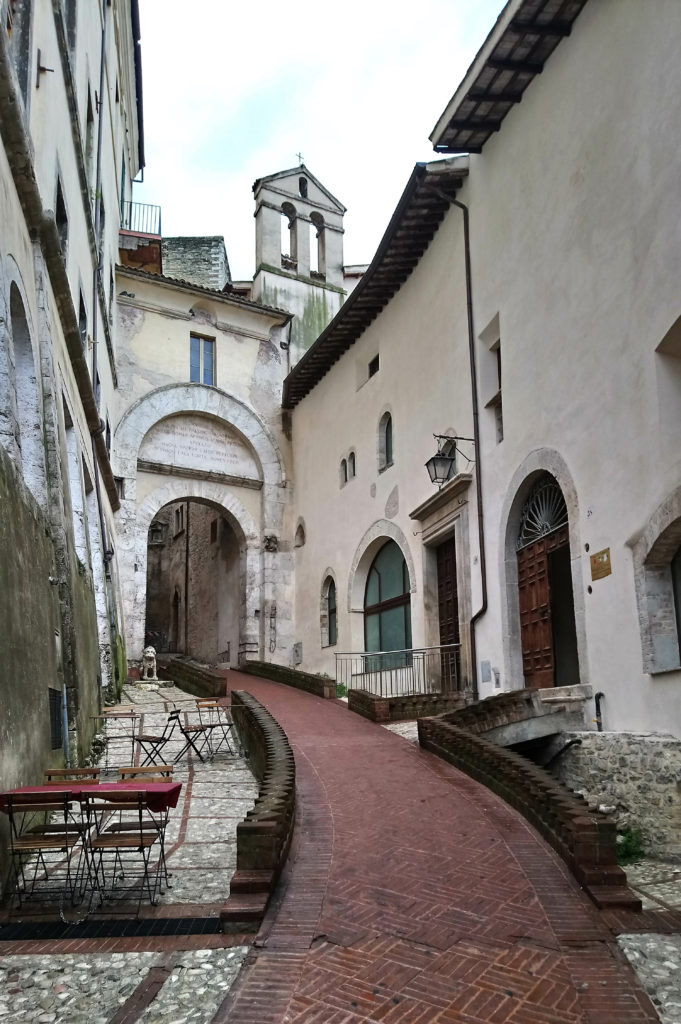 The alleys and arches of Spoleto. (Photo: © Henri Craemer)

Looking outside I see it’s still raining. We both put on our raincoats. I decide to rely purely on my Sony Xperia XA1 Ultra for pictures. We go to reception and find both manager and owner behind the counter. I ask whether it’s possible to borrow an umbrella. The idea is to use it when taking pictures. At first, they don’t quite understand what I mean. I make gestures of putting up a brolly.

We step outside. It’s still raining softly. I put up the brolly. We cross the road. It stops raining. Go figure…

The streets are glistening in the improving light. I take an almost identical picture to the one on page 181 in Sandy Brown’s book (Featured image). Everything looks so clean, even if a bit grey under the lifting clouds. 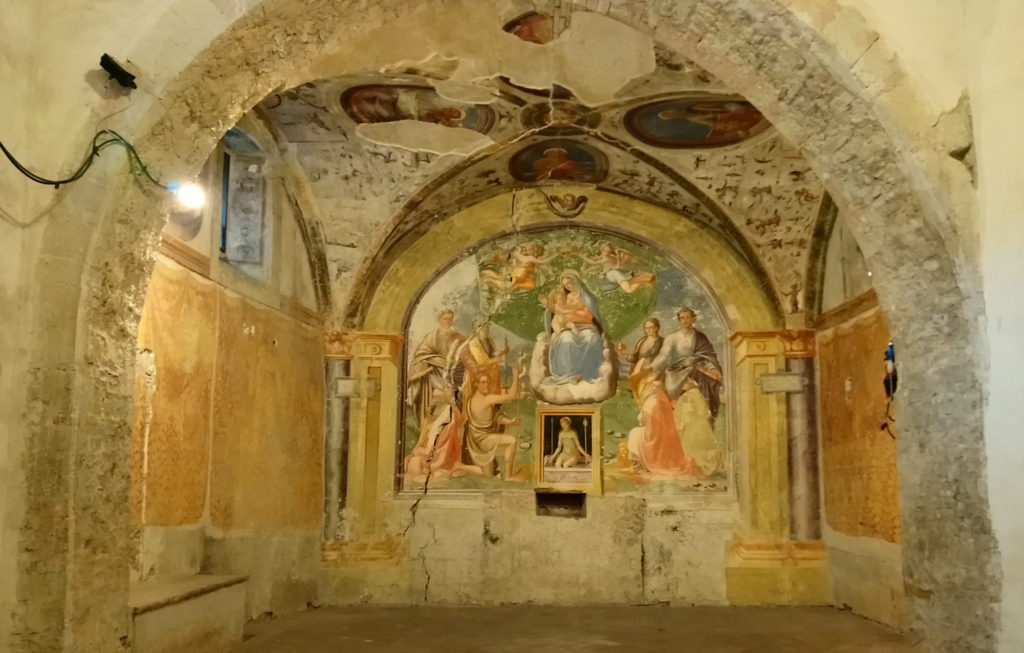 Chiesa dei SS. Giovanni e Paolo with its frescoes dating back to the 12TH to 14th centuries. (Photo: © Henri Craemer)

The first sight we take in is the Chiesa dei SS. Giovanni e Paolo. By Roman Catholic standards this is a very unspectacular building. One would hardly notice it walking through the historical centre of Spoleto. The small Romanesque church is part of the Palace Travaglini. It was completed in 1178. The frescoes originated during the 12th to 14th centuries. In spite of the restoration in progress, it still has atmosphere.

Then we take in the museum Roman theatre. It’s the oldest active theatre in the world. Unfortunately, we don’t have enough time to fully explore the Teatro Romano. 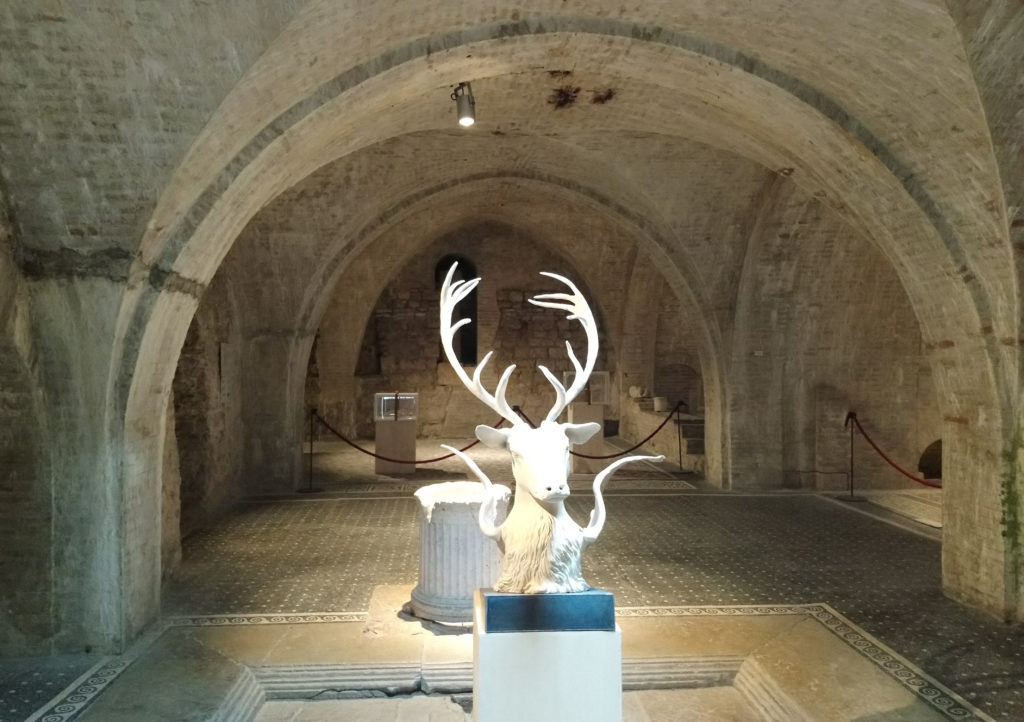 We pay a visit to a Roman house where archaeological work has uncovered some interesting artifacts. The Romans certainly had an eye for beauty – from domed architecture to the mosaic-covered floor. Niels points out evidence of an earthquake. It’s as if the earth has eaten into the mosaic floor.

Our winding way takes us to a coffee shop on the other side of the piazza in from of the Duomo di Santa Maria Assunta. The call is for an espresso before we take a peek in through the doors and move on.

We discover the waymarks of the Via San Francesco. This is the designated end of Stage 18. We retrace the route we would’ve walked if we followed it to the end of the stage. It’s a very steep route with many curving stairways. I’m hugely grateful that I didn’t have to cope with this climb in the rain. It would be a challenge under normal circumstances.

We decide to pay the fortress on the summit of Sant’Elia hill a visit, only because there are elevators taking us there – all seven of them. A lift takes us to the upper levels of La Rocca Albornoziana. It was built (circa 1360) under the direction of the Spanish Cardinal Gil Alvarez Carrillo de Albornoz. 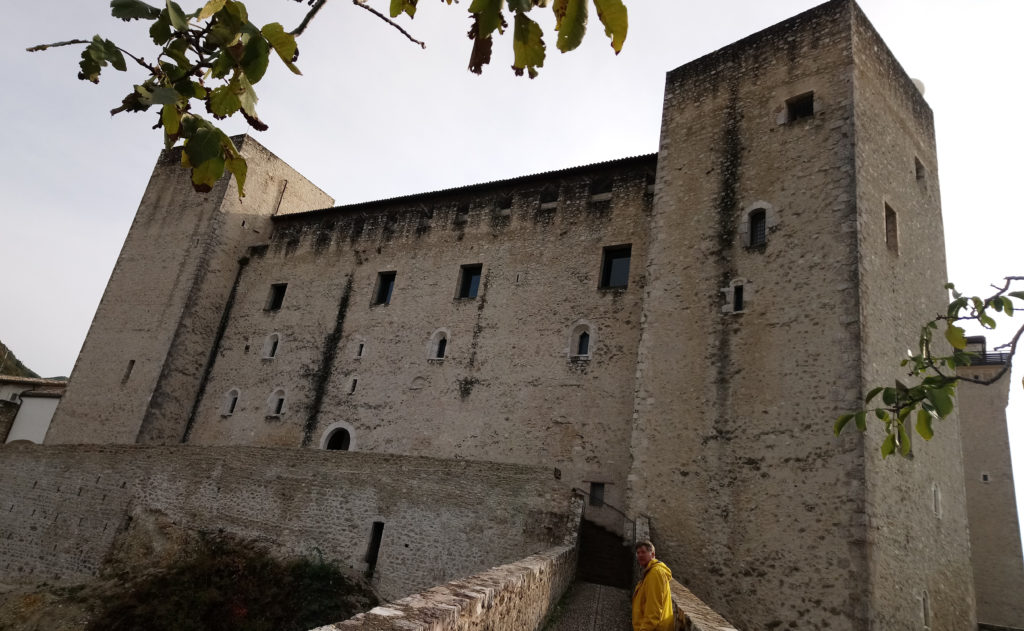 Within the walls of the mighty La Rocca Albornoziana with Niels (Photo: © Henri Craemer)

From the parapet of the fort, we have a clear view of the Aquaduct. Tomorrow we shall cross it over a very deep ravine on the way to Ceselli. Around the front of the fort, we have a spectacular view of the route we took today. The strategic importance of the fortress is obvious. From here you can see the whole of Stage 18. In spite of the haze, the hill of Trevi is vaguely visible. The journey looks much shorter than it felt when we were slogging it out in the rain.

Before returning to our hotel, the light has improved considerably. We decide to pay the Duomo di Santa Maria Assunta a proper visit. It was consecrated by Pope Innocent III in 1198. It rivals any of the other cathedrals we’ve seen thus far. There is just so much to see inside, it’s impossible to cover everything. The frescoes by Filippo Lippi and others are stunning. There is a wealth of artwork including paintings and sculptures. One of the chapels has a letter written by St Francis – one of only two with his signature. 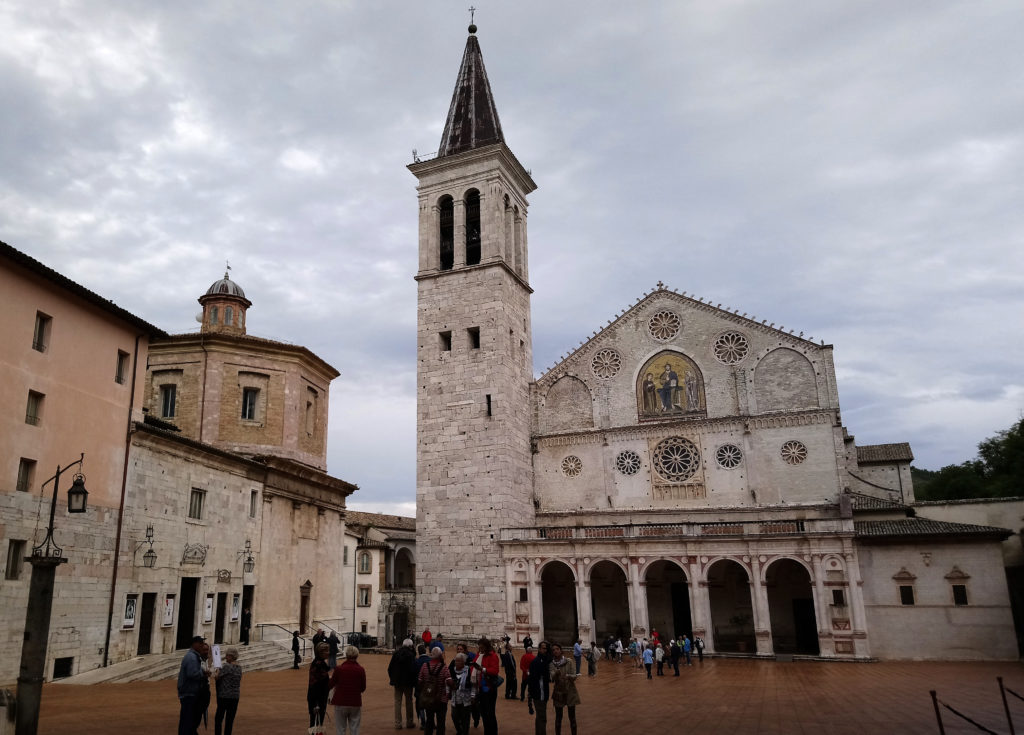 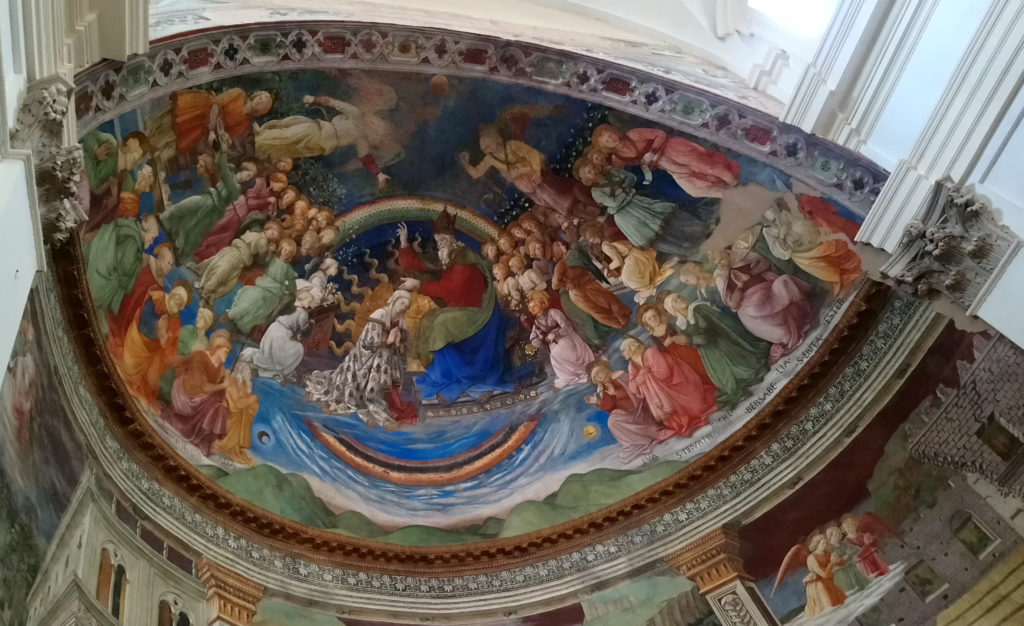 Fresco by Filippo Lippi of Coronation of the Virgin in the Cathedral of Santa Maria Assunta. (Photo: © Henri Craemer) 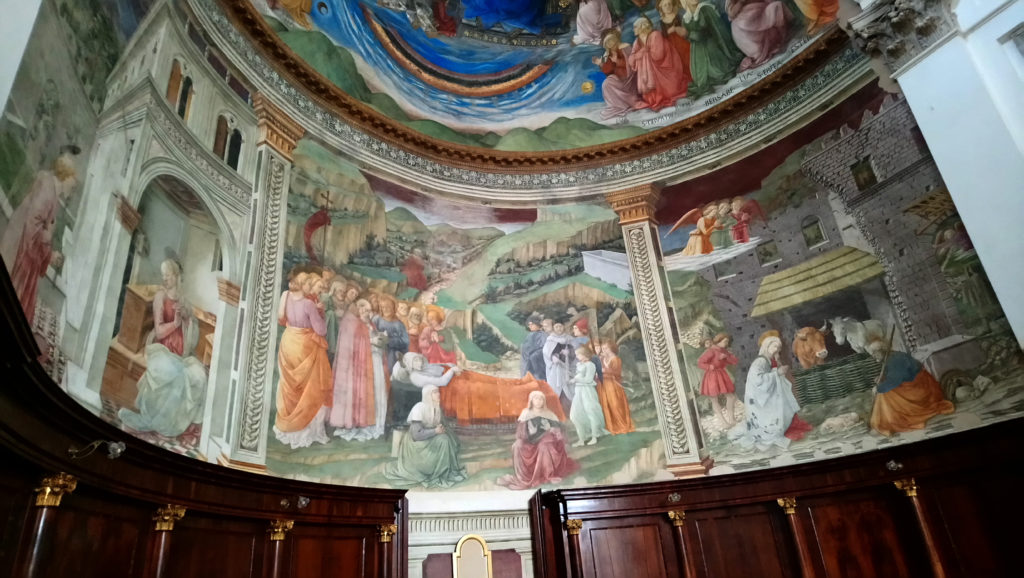 Frescoes of Santa Maria Assunta by Filippo Lippi from left to right: the Annunciation; the Dormition of the Virgin, and the Nativity. (Photo: © Henri Craemer)

Taking a different road to the one that took us up to the fort we walk along a canal possibly built during Roman times. On the other side of it, the city wall encloses the older part of Spoleto. The town has come alive after the rain. We break for drinks and snacks in a very busy coffee shop and then move to a quieter one.

Spoleto is steeped in history. There is so much to see – archaeological sites, Roman villas, churches and general beauty of the town. It’s impossible to do it justice in just one afternoon. We have barely scratched the surface. Frustrating.

On the way back to the room we stop in at reception to return the brolly.

“Umbrillo magica!” I say. “Umbillo whoosh,” I gesture a brolly opening, “rain finito!” The owner and the receptionist find this hilarious.

The hotel people recommend a restaurant around the back for supper. It opens at 19:30. Niels and I discuss tomorrow’s route. We decide that since we’ve already ascended to the starting point of Stage 19 on foot, we shall take the elevators and continue from there. I’m very glad we both see it as the best alternative.

Our food arrives. Never let it be said that the Italians don’t know how to do steak because mine is a gourmet’s delight done to perfection. We return to our room. Healing sleep comes easy. No thoughts of tomorrow.