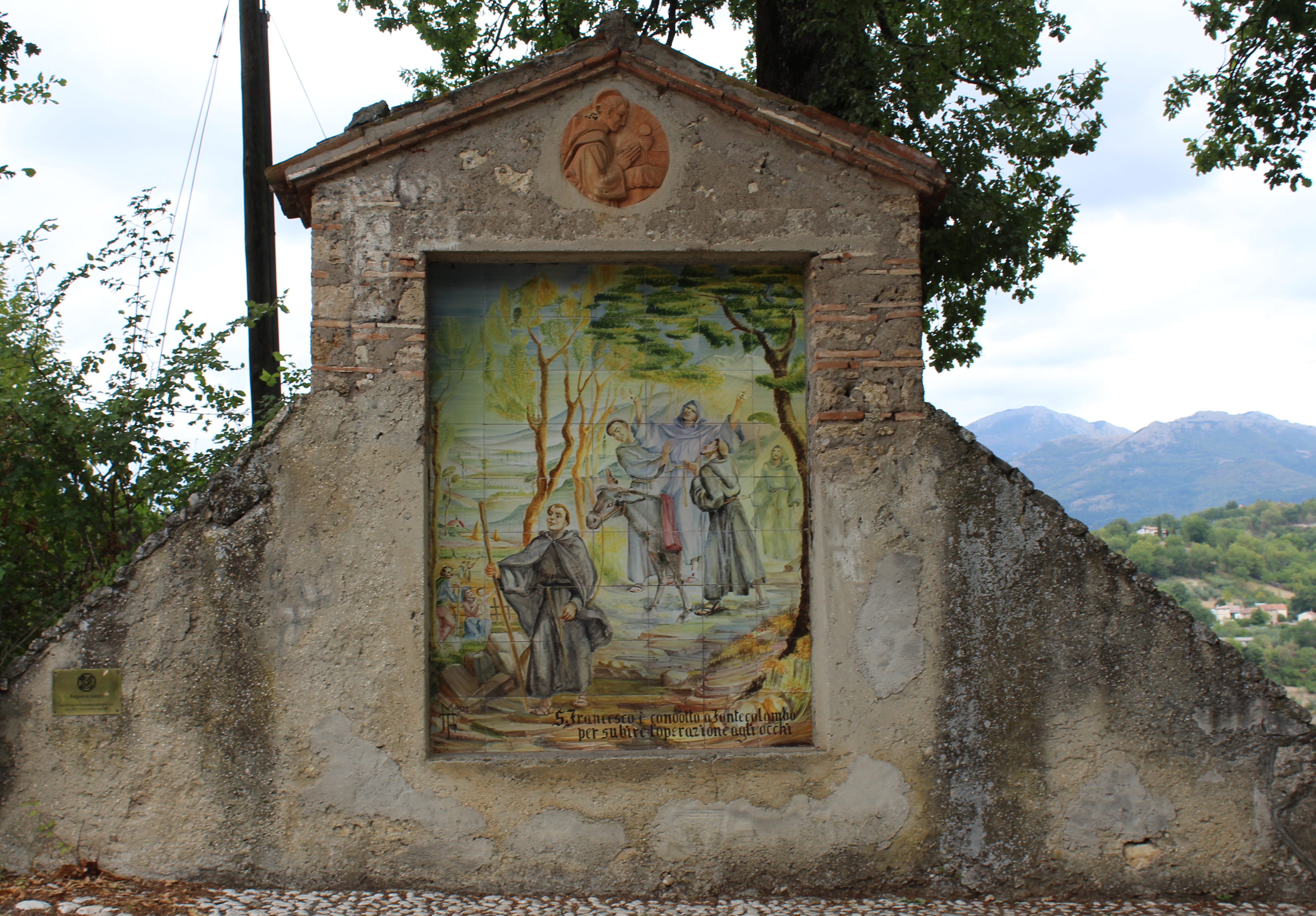 27 Jun Reflections on the Road to Rieti

The peace surrounding Santuario La Foresta and overcast conditions deceive my sense of time. I feel rejuvenated before our quest on the Way of St Francis continues. When we start walking, it’s already well past midday. Time is not a factor because we’ve completed well more than half of Stage 23 of the Via Francigena di San Francesco on the way to Rieti.

At the outset, I admire the tile work depicting the Stations of the Cross. As we walk away from Santuario La Foresta, the panel numbering goes from XII – I. It is clearly arranged for the Ceremony to end inside the Sanctuary. Some of them look as if they had recently been cleaned, while a couple others have a few tiles missing. 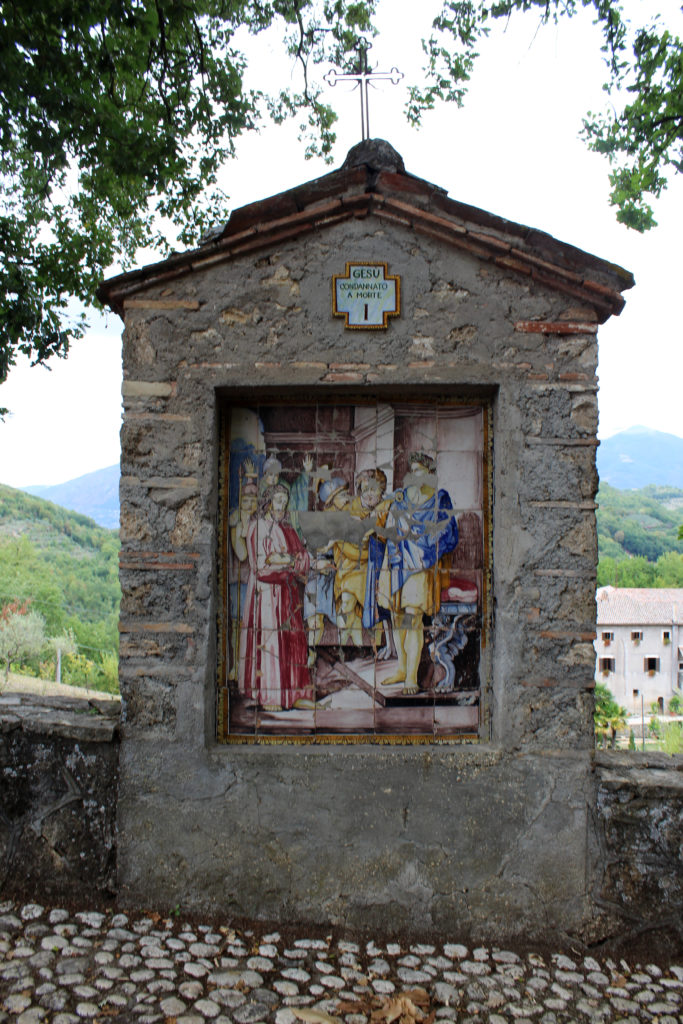 Memories and Reflections on the Passion of Christ

Seeing the Stations of the Cross reminds me of a time when I had a part in a church Passion Play. I played the part of the Roman centurion who was responsible for torturing Jesus. The friend of mine who wrote the play did it in the style of a news background show. Key figures who had a role in the condemnation and crucifixion of Jesus Christ related events as they saw them. Amongst them were Caiaphas, Herod, Pontius Pilate, Simon Peter, Mary – His Mother, and Judas.

I gained an interesting insight into the Passion through my friend’s view of the centurion. The centurion was moved by the intensity of the suffering of Jesus to the point that there was hope for him. And so, it occurs to me that hope may be far more important than I’ve thought up to now.

St Francis in the Rieti Region

After the Twelve Stations, there is a panel of St Francis. The inscription reads: S Francesco e condotto a Fontecolombo per subire l’operazione agli occhi (meaning St Francis and his following on their way to Fonte Colombo for his eye operation).

After St Francis had gradually lost his sight due to an illness in his eyes, Cardinal Ugolino of Rieti insisted that he come to Rieti to see a renowned physician. The Cardinal believed Francis could be cured. St Francis decided to stop over and rest at the church of San Fabiano. 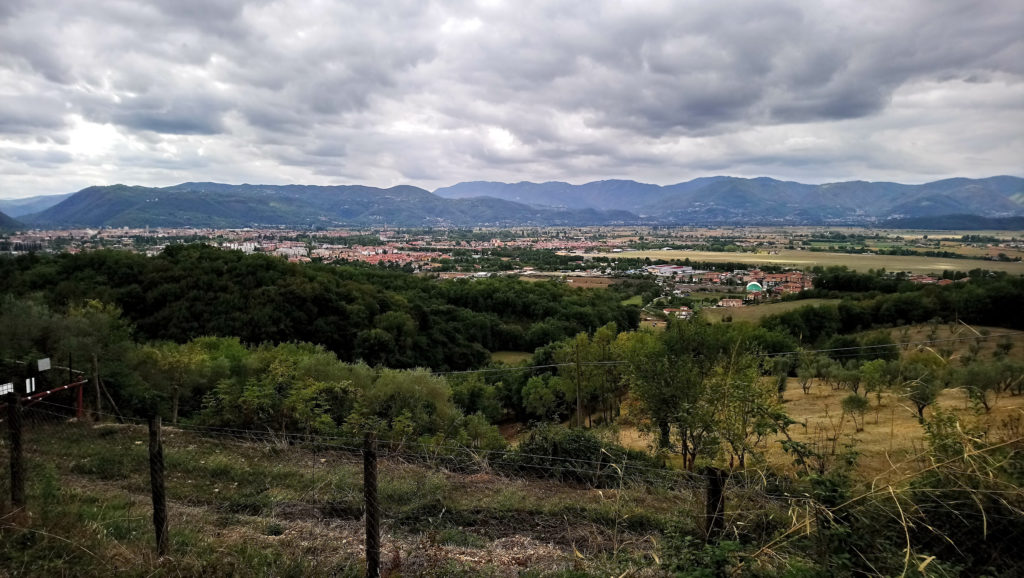 St Francis’ stay of more than 50 days drew a large gathering. The crowds consumed so many grapes from the vineyards that it threatened the annual yield of the crops. The farmers implored St Francis to do something. He asked them to bring the remaining grapes to the winepress at the church. After this was done crop yielded twice as much wine as the previous year. This became known as the Miracle of the Wine.

San Fabiano later became the convent of La Foresta. I find it interesting, almost ironic that the Convent’s Communita Mondo X is now a treatment centre for drug and alcohol addiction.

St Francis did make it to Fonte Colombo where his eyes were cauterised to cure his illness. While his followers couldn’t bear to look on, he insisted that he could feel no pain.

This was not the first time St Francis was in this region. He was here in 1222 – 1223 when he dictated the contents of his rule for communal life. He loved the steep cliffs and cataracts of Greccio where would meditate.

On Christmas Eve of 1223 St Francis also recreated the nativity scene, using farm animals, a manger, and villagers. From here it spread throughout the world to become one of the most common ways to commemorate the birth of Jesus.

Scanning Sandy Brown’s info on Rieti, I see nothing on St Francis’ death. Perhaps my impression that he died there is wrong. Maybe I’m simply confusing the eye operation with his death. I’ll check the facts when the day’s trek is over.

With me taking photos and reflecting, Niels stretches the gap between him and me. I decide to walk at my own pace. The road is very easy to follow from that point onwards. In the distance, Rieti is spread across the valley. We gradually descend towards the town. He waits for me where we cross the Via Angelo Ricci. 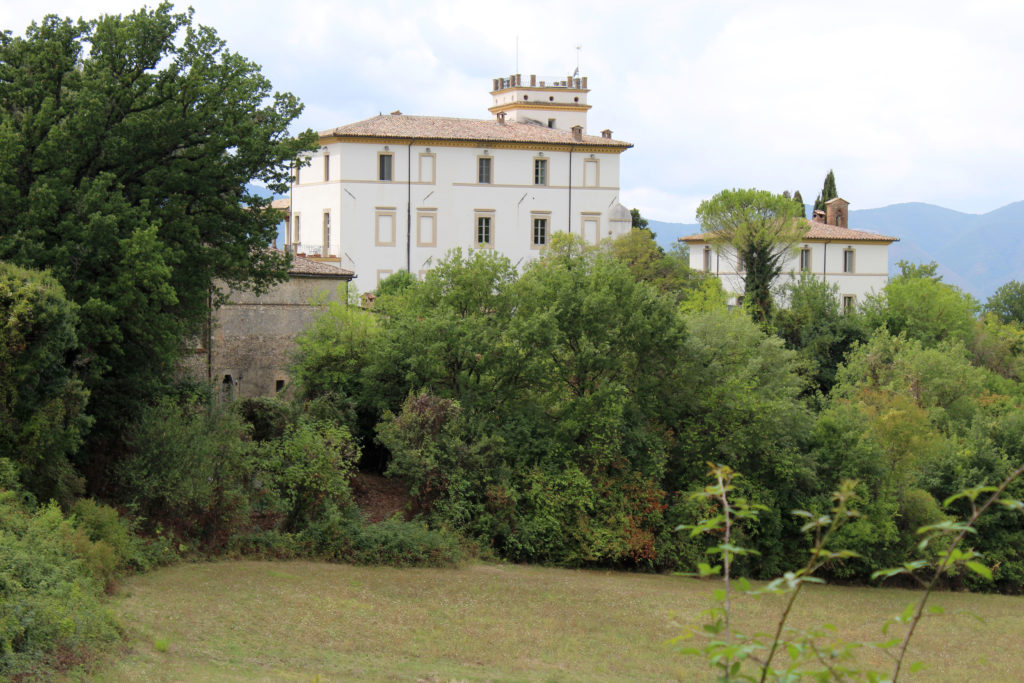 We pass near a learning institution from which a large number of teenagers are emerging. Many of them carry drawing boards and draughting kit.

With still about 2km to go, the discomfort of my left little toe causes me to wriggle my toes. That is a big mistake. The nail of my little toe cuts into the one next to it. Niels had warned me previously to keep my toenails as short as possible. Clearly, my intention to cut my nails after today’s hike means I left it too long. This last part of the walk becomes progressively more agonising. I do everything to hide this from Niels because I know he’ll be annoyed. Whether I’m successful I won’t really know. At least he said nothing about it.

We’ll be staying at Hotel Cavour. The last little push through the town to get there feels like an age. One thing I’ve learned about Niels is he’s like a horse when he gets close to the destination. Sensing that they’re close to home horses will generally speed up to get home quickly. Today this makes things a bit more painful.

When we get to the hotel it’s a bit too early to check in. We decide to find a place to eat. We’re just in time for some pasta at a place close to Hotel Cavour.