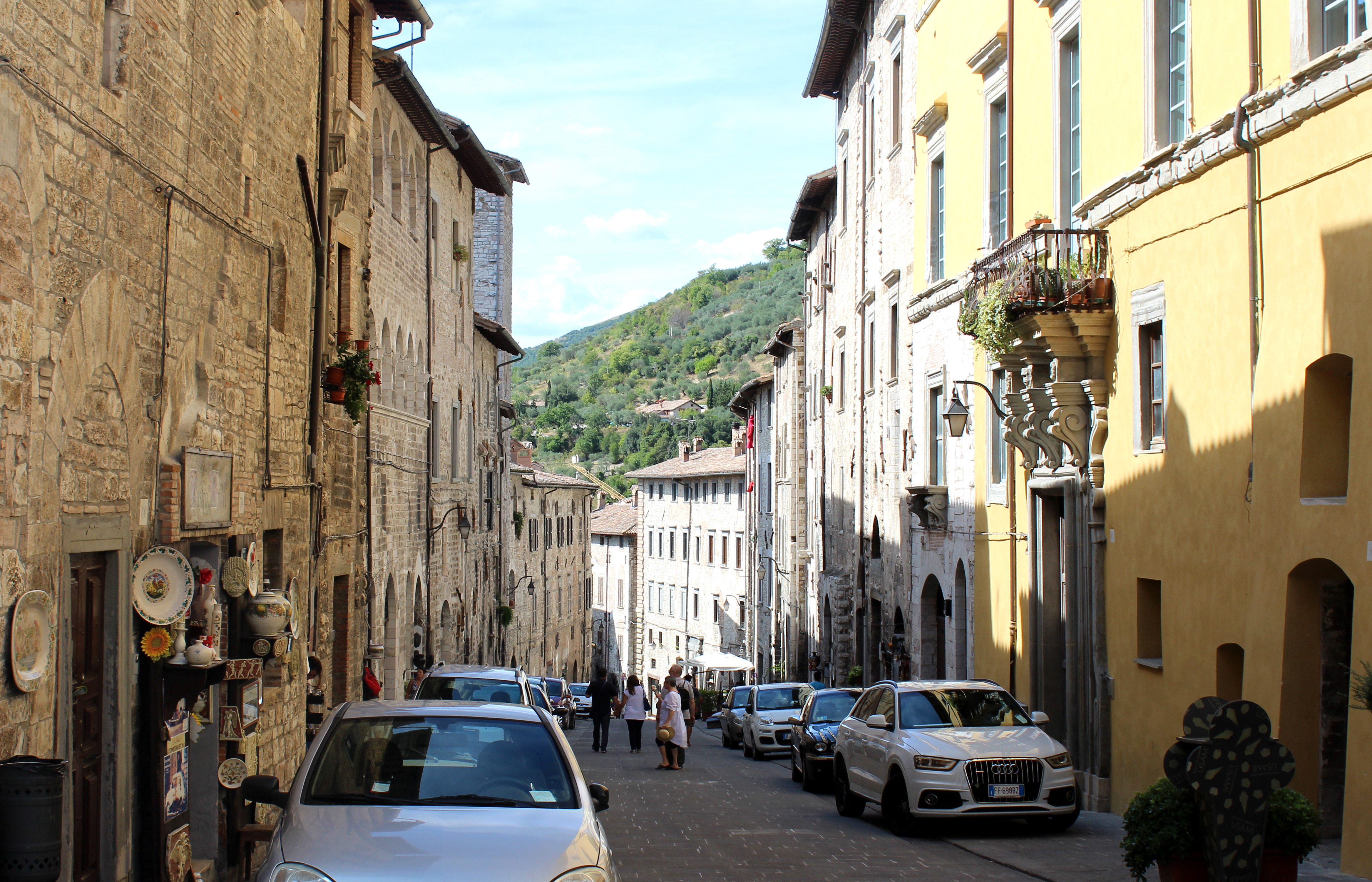 4 September 2017, 14:20. We’ve just entered the old part of Gubbio through a very large archway in the city wall. It’s a typical Italian small-town summer afternoon as we conclude Stage 12 of the Way of St Francis. There is an air of sleepiness about the place. Some of the places still bear the scars of an earlier earthquake.

St Francis and the Wolf

We get to a statue of St Francis and the wolf. The Saint is pleading with God. The wolf is peacefully resting his head on St Francis’ knee. 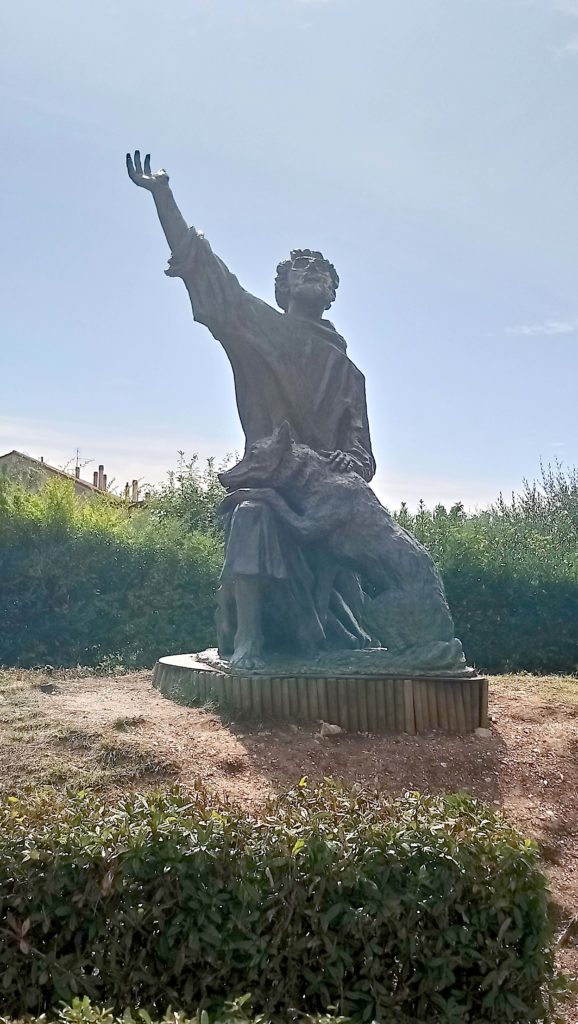 Statue of St Francis and the Wolf. (Photo: © Henri Craemer)

There are a number of versions of the legend. This happened soon after St Francis started his ministry. The general theme is that the town of Gubbio was terrorised by a fearsome wolf, and the beloved saint got the wolf to not only stop his evil ways but also to be a servant of the town.

It starts with the wolf eating humans after it was no longer satisfied with hunting livestock. When it killed two shepherds and their father, the mayor sent three of his best guards to find it and slay it. The wolf killed two of them and the third returned heavily wounded.

It was still early in his ministry but news of the holy man who could talk to animals had already spread to the townspeople. They found him in Assisi at the house of Bernardo Quintivalle, who had become his first follower. He listened to what they said and then decided to go and hear from the wolf what his case was.

St Francis approached the wolf’s lair, the crowd following at a safe distance. After calling to the wolf, it appeared and attacked the saint. As the wolf came at him, Francis made the sign of the cross and the wolf stopped. The people watching were amazed. The wolf sat at his feet and listened while St Francis prayed and spoke him. The Saint walked back to town with the wolf accompanying him.

As the people gathered in the town square, the situation was tense. They were far from convinced that the wolf would change its ways, and their safety was no longer at risk. There were intense deliberations which lead to a pact with the wolf witnessed by God. In exchange for daily food, the wolf would no longer hunt the people of the town. He became their defender.

Two years later “Brother Wolf,” as the townspeople came to call him, died. He was buried in the Small church of St Francis of the Peace outside the city walls. During renovations in 1872, a wolf’s skeleton was found under a slab outside the building. It was placed under the altar in memory of its transformation by St Francis.

My awareness slips back to the present. In looking at the statue, I realise there are so many things one can read into it. So often in my life, I’ve been faced with wolf-like life situations. While desperately pleading with God, I have many times not seen that He had already provided the solution. A quiet sense of peace and gratitude fills me. 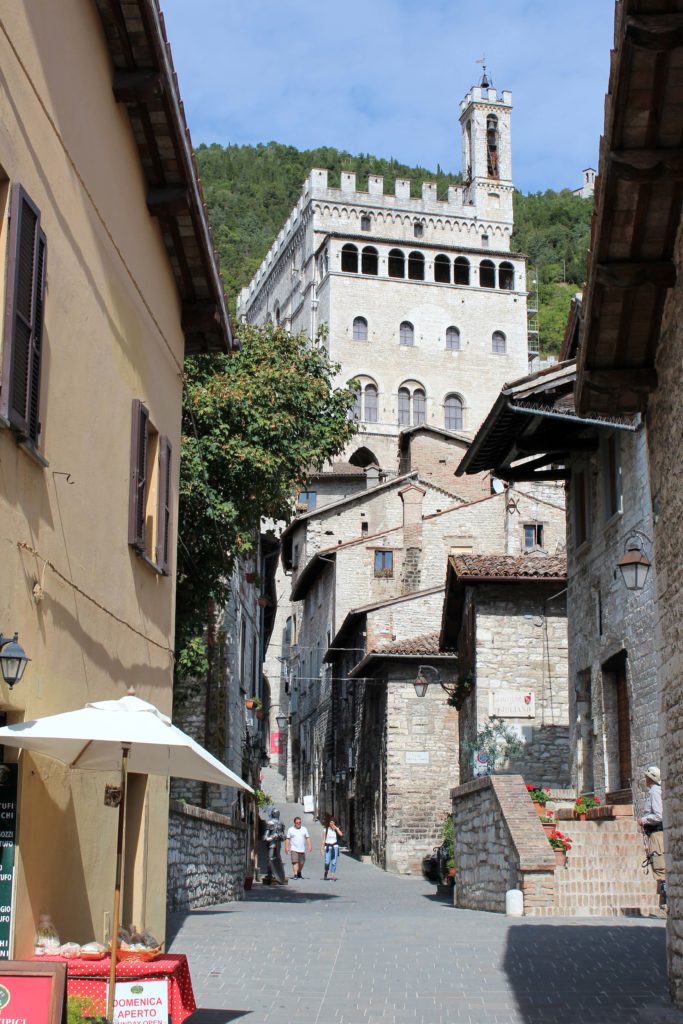 A street in Gubbio looking up at the imposing Palazzo dei Consoli. (Photo: © Henri Craemer)

The Basilica of Sant’Ubaldo way above the town is dedicated to one of the most beloved sons of Gubbio. When Frederick the great (AKA Barbarossa) laid siege to the town, a miracle happened ascribed to Sant’Ubaldo. After destroying most of Spoleto, Frederick marched on Gubbio. Before Gubbio was to suffer the same fate, Frederick met with Sant’Ubaldo. As a result, the peaceful nature of Sant’Ubaldo so moved Barbarossa that, instead of destroying the town, he decided to spare it. He also granted Gubbio the rights of a free commune.

Rest and Recovery in Gubbio

We move on to a street corner café. Some delicious cold meats on bread, frizzante, and beer refresh us.

Walking to our accommodation we have to negotiate the very steep gradient of Gubbio. Only now do I realise how tired I am, and how much the heat has gotten to me, but Stage 12 is in the bag. I feel sorry for the pilgrims who come all this way and still have to make their way up to the monastery and Basilica.

In the Albergo’s room, there is no place to hang up our washing. I construct a makeshift washing line with my spare shoelaces. Problem solved.

On the recommendation of the manager of the Albergo, we go to La Taverna del Lupo. We have the best meal of veal yet and solve the problems of the world. We walk back, with the moon nearly full lighting up the alleys of old Gubbio. 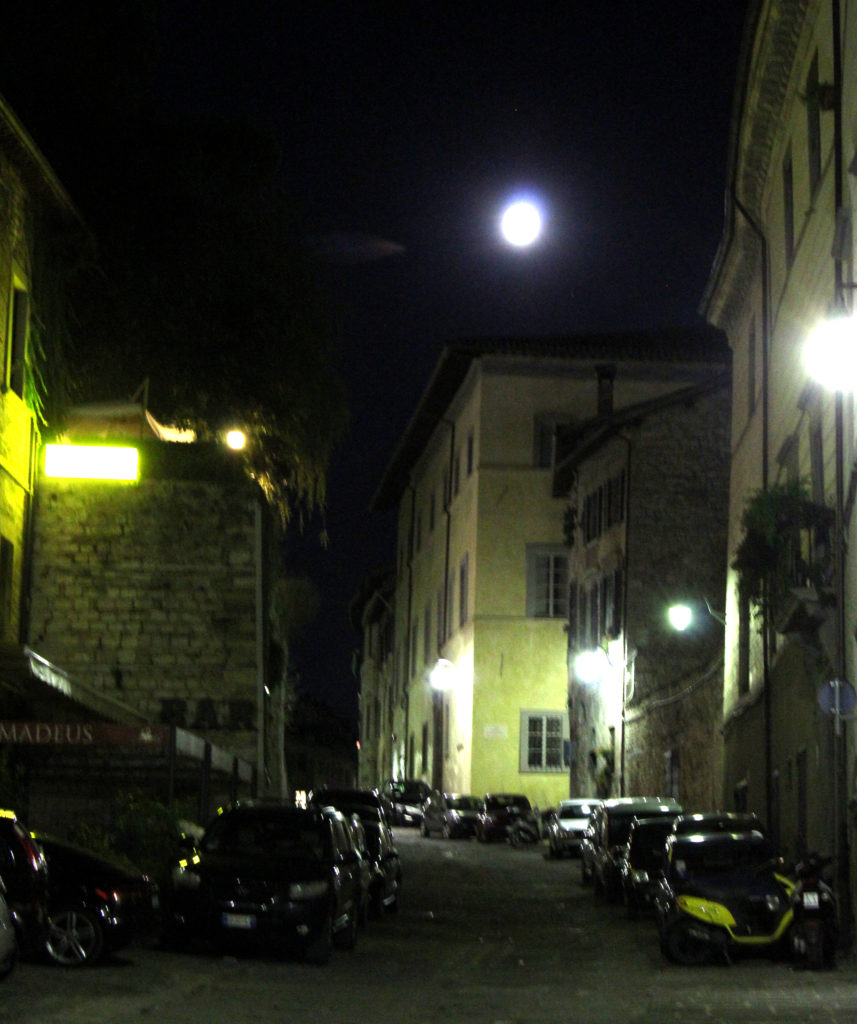