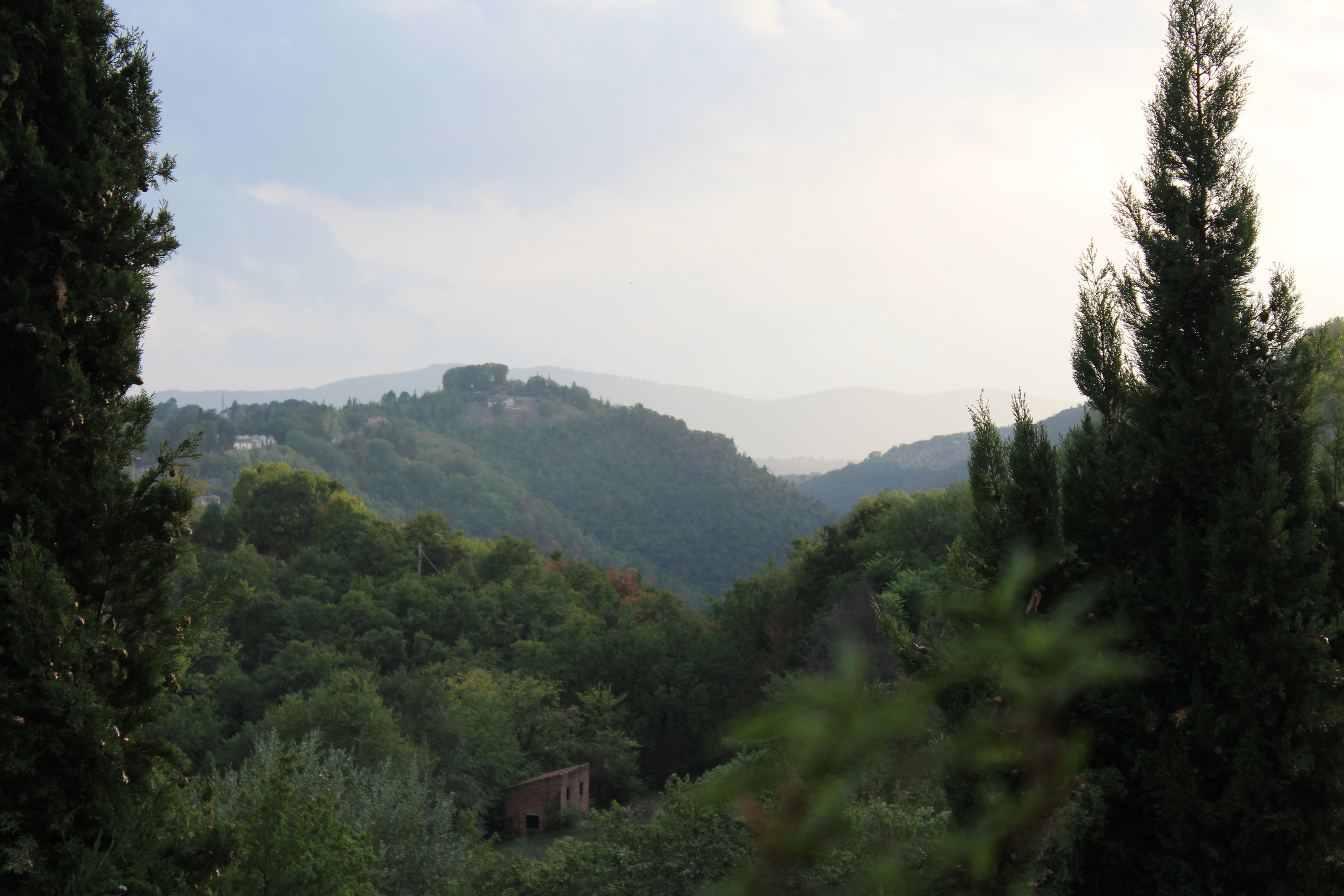 Saturday, 16 September 2017, late afternoon. Agriturismo Santa Guista is a stop on the Way of St Francis with a beautiful setting. I amble around outside for a bit, taking pictures. After being inside for a while I hear rain. Niels and I rush outside to rescue the washing. For some reason he cannot find his ankle guard. After the rain stops, I patrol the area to see if I can’t find it. He doesn’t seem too concerned, which I find a bit strange.

Clearly, I am not well. My use of salbutamol to keep the asthma at bay has increased. I have a headache, for which I take an increased dose of paracetamol, as well as ibuprofen. I’m also shaky. My body is feeling tender beyond what one would expect after doing a hike of more than 20km, especially considering that I’m at the best level of fitness for me in the past 30 years. 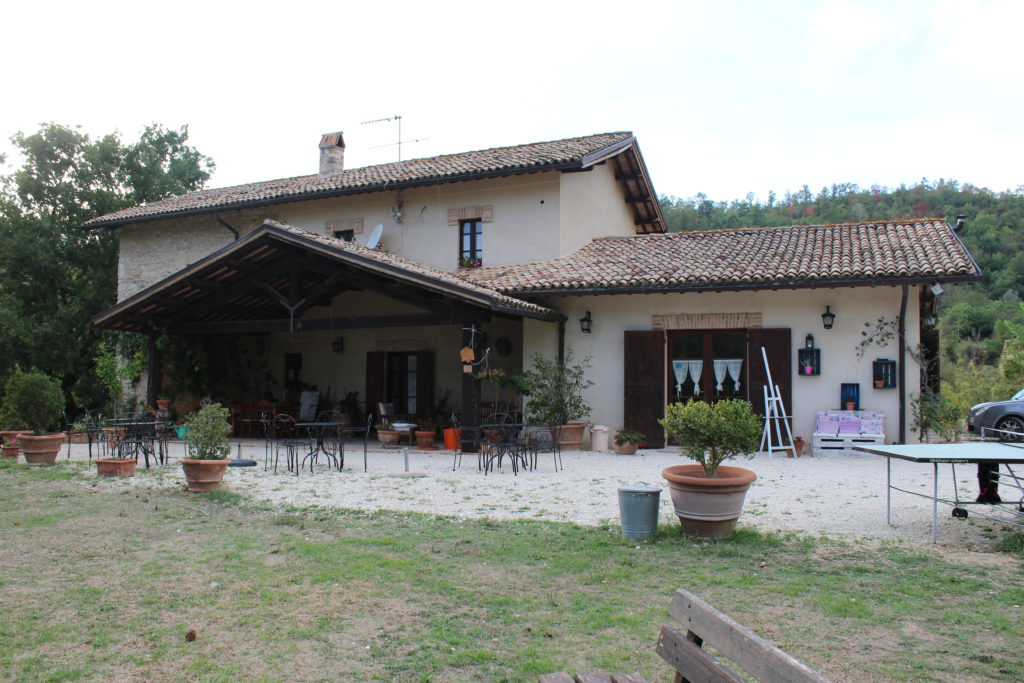 The Realities of Illness

Niels suggests I take a few days off hiking. I hate to admit it, but his suggestion makes sense. Sandy Brown rates Stage 25 to Ponticelli as Hard. Statistics indicate a trek rated a trek of 23.2km*. That means a hiking time of no more than 5 hours on the trail under normal new fitness conditions for me. However, in my current state, it would take me much longer. Total ascents of 821m and descents of 1015m would pose a serious challenge. Throw a strong possibility of rain into the equation and a worst-case scenario can become a reality.

I can’t deny the challenges of being 63yrs of age. I may have a remarkable ability to recover, but there are limits. The complications from causing cardiac damage can be dangerous.

In considering my options I’m reminded of the saying that discretion is the better part of valour. This is cold comfort. FOMO strikes me. It is with a heavy heart that I accept my fate. However, a sense of reality dictates that I do it. There is a real possibility of making things worse if I push myself too far and too hard. 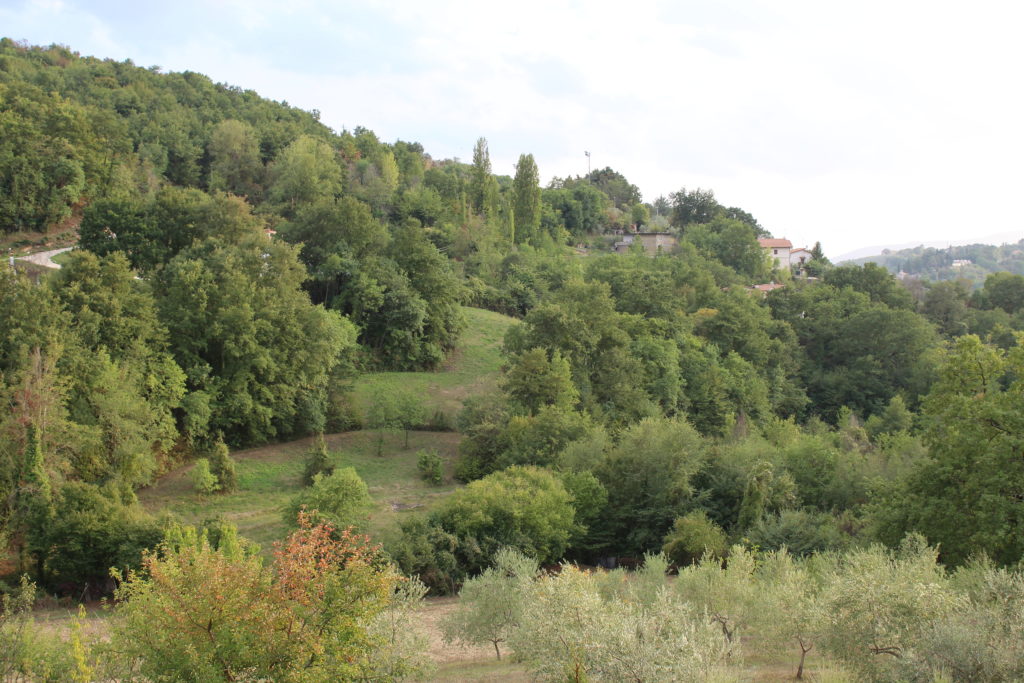 I decide to take Niels’ advice and rest for the next three days. He will hike alone. That means I will be out of it for Stage 25 and half of Stage 26. The half stage is as arranged by Caminoways. Instead of stopping at Montorotondo at the end of Stage 26 where Sandy Brown pegs it, we’ll stop at Montelibretti. That will cancel out the day we walked Stage 14 to Valfabbrica and Stage 15 to Assisi.

Were’ also not booked in at Ponticelli. There isn’t enough accommodation. The people of the place where we’ll be staying will send someone to fetch him from Ponticelli, about 8 km away from our pitstop.

Stages 25 and 26 are split by a day of rest. I’m thankful that it means I won’t miss out on more walking. While the approach is to evaluate how I’m doing on Tuesday, I am determined to be ready for the next stage by Wednesday.

We go and see the innkeeper to arrange transport for me. This is easily done and paid for. I’ll babysit the backpacks. 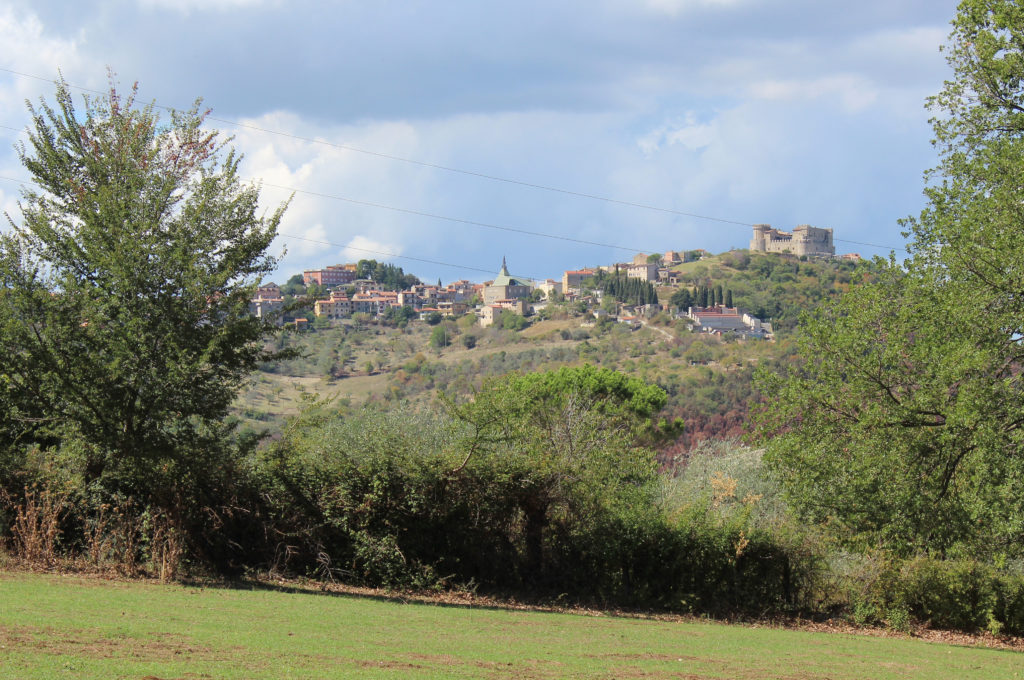 Distant Castello Orsini as viewed from the destination of Stage 25 near Ponticelli (Photo: © Henri Craemer)

Supper at the agriturismo is the simplest yet tastiest dish of lentils and pasta, followed by a chicken stew. We’re glad to see the dining room fill up. I didn’t expect it because the place seems so remote. The place has a beautifully warm atmosphere.

In spite of getting to bed at our usual time, and being very tired, I have a rough night. When I awake in the morning I do feel somewhat better. Denial sets in again. The thought of actually hiking crosses my mind. Niels and I discuss it again. I reluctantly accept that I have to take the time off.

09:00, 16 September 2017. The light is a strange bright haze as Niels sets off, almost as if it’s on the verge of clearing up. However, very soon after the clouds close in. A gentle rain starts falling, which doesn’t last long. I wait for the innkeeper to call me to take me to our next pitstop.

At 11:00 I go in search of him. After finding him, he tells me he’s ready to go. In my state of being lost in thought I confuse the driver’s and passengers’ side of the car. I walk to the driver’s side of the car. He is amused and asks if I would like to drive. I decline. In South Africa, we drive on the left-hand side of the road. In Italy, it’s on the right.

Coming from a country with a very high road accident death rate, I continue to be impressed with Italian drivers. The big difference between South African drivers is that Italians may drive fast, but they’re very competent and at least they respect each other. By comparison, they are saints on the road when it comes to abiding by the traffic rules. There is one exception: they like cutting corners at speed.

By 12:00 I’m settled in at the next pitstop. I have a frizzante while sitting on the porch, enjoying the view. It’s a rural farm setting with very little to do but sleep, so I have a nap.