Henri Craemer | Discussions, Contemplations, and Meetings in Ceselli
An afternoon and evening in Ceselli in which the day’s hiking is contemplated. Strategies for Stage 19 are discussed with two other pilgrims.
Ceselli, Spoleto, Arrone, hiking, footwear, sandals, Lindsey Cowie, language Flemish, Afrikaans
16441
post-template-default,single,single-post,postid-16441,single-format-standard,qode-quick-links-1.0,ajax_fade,page_not_loaded,,qode-theme-ver-11.0,qode-theme-bridge,wpb-js-composer js-comp-ver-5.1,vc_responsive 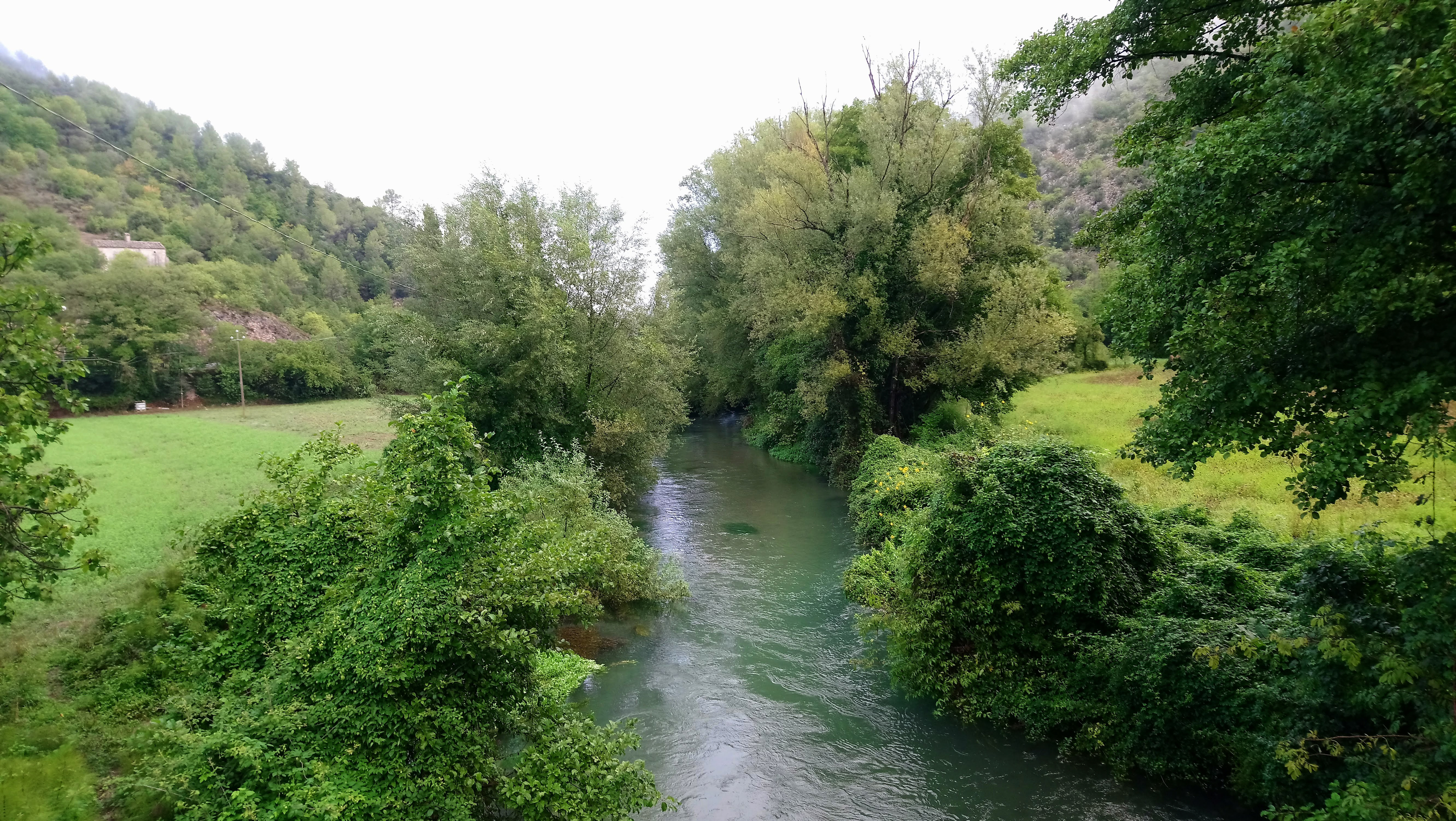 29 May Discussions, Contemplations, and Meetings in Ceselli

9 September 2017, 14:25. We arrive in Ceselli at our destination just as it starts raining harder. Not a soul is home.

We drop our daypacks on metal tables under a cloth covered area. It’s wet almost everywhere. The covering of the area leaks heavily. Niels and I find two PVC chairs that are still dry and sit next to the only dry table.

We take off our raincoats and shirts – wet on both outside and inside. Since we had our packs ported from Spoleto, we are missing essentials like dry clothes. All I can do is put on my hoody. For me, this is not enough because the chills are getting to me. At least I’m dry from the waist up. 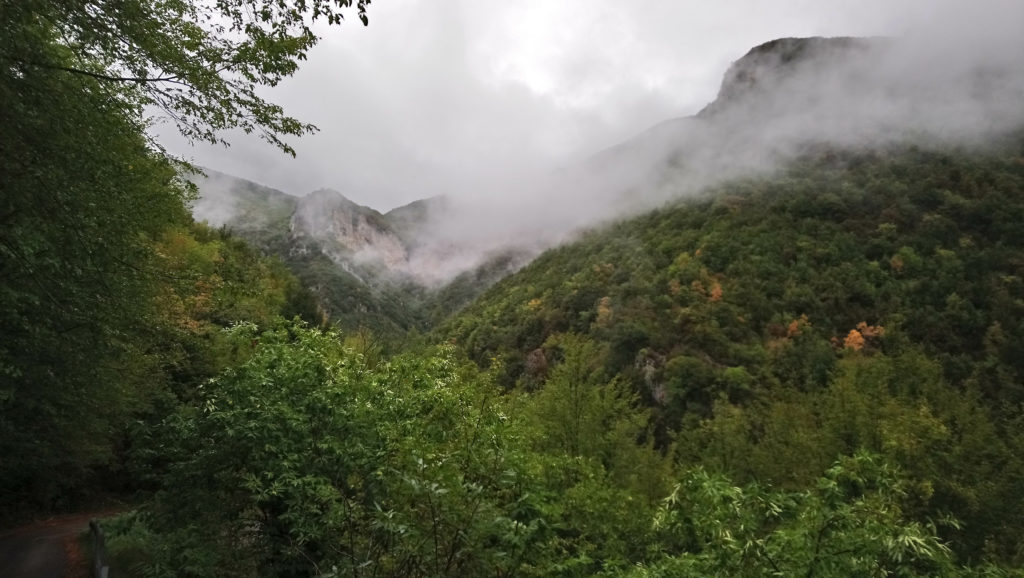 Niels decides to wait until 15:03 before calling the innkeeper. It’s a difficult conversation because the innkeeper’s English is only marginally better than Niels’ non-existent Italian. We gather he is in Arrone. It will take him a half hour to get to us.

It’s quite normal for us to feel cold after an intense hike like today’s one. Our bodies seem to go into a kind of energy crash. Today the low temperatures make it worse. As a result, I finish all the water and the snacks I packed at the hotel. The air rapidly gets colder. I start shaking. Niels recommends I put on my raincoat over my hoody. I decide not to do so because it’s too wet on the inside.

Tiredness has also caught up with me. If I could sleep, I would. I cross my arms tightly around my chest in an attempt to warm up and stop shaking. Just before the innkeeper shows up at 15:30, the shaking stops. I know I’m going to pay later for not being warm enough for too long.

We check in, collect backpacks, and some beer and frizzante from the innkeeper. He also gives us the usual innkeepers’ breakfast pack, almost identical to the one we got to when we stayed in Citerna. He informs us that he’ll take us to a restaurant close by at 19:00. We are extremely grateful because the last thing we want to do is go without supper, or somehow struggle to make supper.

Niels and I do our post hiking routines. We skip clothes washing, knowing that they would not be dry in time. What I would love is a nice warm bath in which to warm up. The shower feels barely warm enough. After that, I try to nurse my Sandy Brown book which hasn’t had a chance to dry yet. I have to carefully pry each page loose from the next. 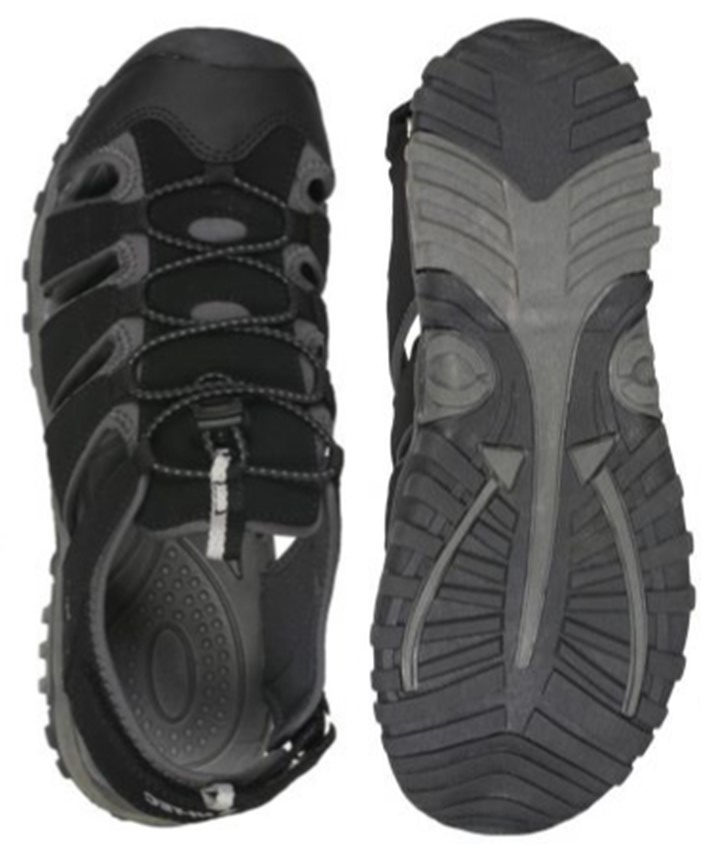 The latest model of the HI-TEC sandals I wore many miles.

The topic of crossing the Ponte delle Torre Aqueduct comes up.

“What would you have told the police if we were caught?” I ask Niels.

“Why not just tell the truth?” Niels asks.

“Good point!” An important thing I’ve learnt in life is that almost no one dies from telling the truth. Especially if one puts your trust in the Lord.

The discussion turns to footwear. I’m surprised and very pleased with how my sandals held up over the wet rocky terrain. I’m glad I followed Lindsey Cowie’s advice when I bought them. Since she walked about 500km in hers, her advice is sound. The closed toe kept the small stones and gravel out. The sole and tread prevented me from slipping on what was sometimes a very wet path.

“Maybe you can wear them again tomorrow.” Says Niels “It’s a bike path most of the way, and flat as a cow’s how’s your father.”

Late in the afternoon, the first signs of health problems appear. My chest shows signs of closing up. I use an inhaler and the problem goes away.

An Evening in Ceselli

At 19:00 the innkeeper collects us for supper. We are joined by two pilgrims – husband and wife – from Belgium. They speak Flemish and we speak Afrikaans*, the language of our youth. The two languages are very close, and in some cases identical. Communication between us is fluent. I never anticipated speaking Afrikaans in Italy.

They are making their way in the opposite direction. We decide to share a table at the restaurant and exchange stories. She had planned to do the walk for months when a friend pulled out. Her husband decided to take her place at the last minute. We mainly chat about our Spoleto-Ceselli stage, and their trek from Arrone. I’m very glad we’re not walking in the direction they will be. It was hard enough coming down the mountain on the Ceselli side. Going up would be more strenuous, especially with the prospects of rain.

The big question is whether or not they should walk or take transport to Spoleto. We are reluctant to give a direct answer. Both Niels and I feel they should consider transport. The wife won’t have a problem because she’s in great walking shape. However, the husband does not seem fit at all. He is plump, and his face has a florid appearance. If something goes wrong, it would require rescue by helicopter. We give a graphic account of the terrain and conditions, trying to persuade them not to walk. They say they will decide tomorrow.

After we get back to our room Niels says he reckons the man would have a heart attack if he attempts the next day’s trek on foot. Since he’s in worse shape than I was when I started this seems to be quite a possibility.

* For a more scientifically based comparison of Afrikaans, Dutch, and various dialects, the following article can be read: