28 Apr Contemplation and the Pilgrim’s Mass

7 September 2017, around 11:00. After our wanderings through the Basilica di San Francesco, Niels and I sit on the piazza looking at the cathedral and the piazza framed by arches.

“This scene reminds me of Assassin’s Creed,” he says.

“What?” I know the game, but the remark is so left field that it takes me by surprise.

“One can almost see how they engage in combat here.” 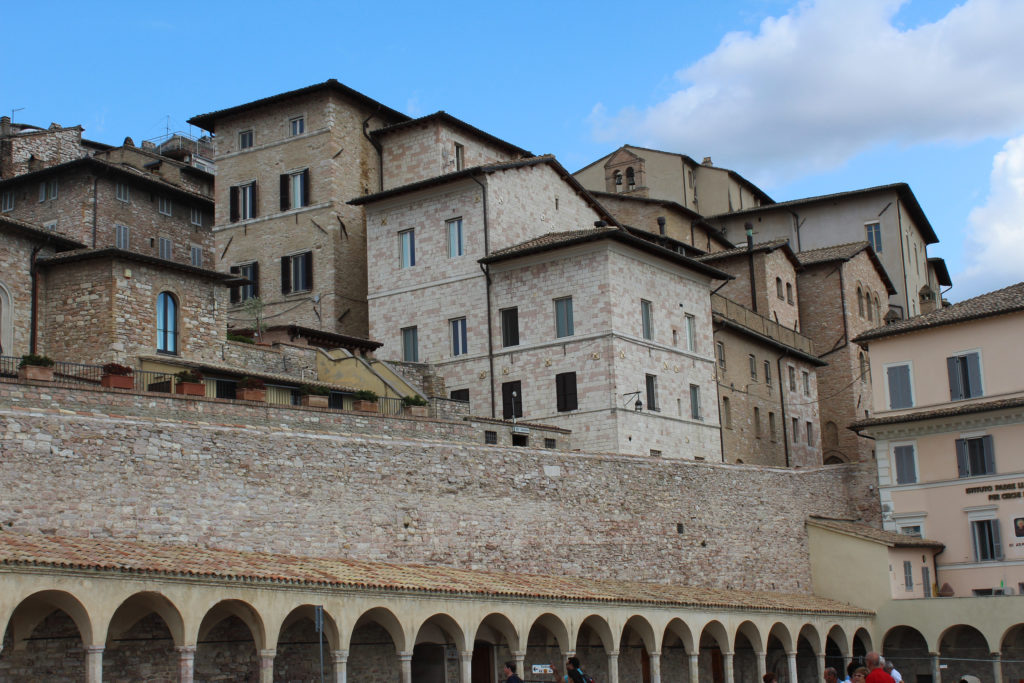 Assisi near the Cathedral of St Francis – a setting for Assassin’s Creed? Also, have a look at the Basilica itself. (Photo: © Henri Craemer)

The morning is very quiet. We fall into silence.

Both Niels and I spent our youth at Afrikaans schools in South Africa from 1961 to 1972. That makes our religious upbringing very staunchly Protestant. Our teachers at school and Sunday School made the differences painfully clear, with the virtues of Protestantism highlighted against the evils of Catholicism. While his family background is English (mother) and Dutch (father), mine is Afrikaans. My father was a conservative nationalist, while my mother attended English schools and university, making her very liberal and enlightened when it came to politics and religion. Her background may have been Protestant, but she was very pro-Roman Catholic. She thought the so-called evils of Catholicism were a gross misrepresentation.

I very strongly share my mother’s views that religion is of lesser importance than what one worships. It was of foremost importance to her that one is a Christian. By that, we all worship the same God – the unified Trinity – and gain redemption.

Some thoughts on Saints and Intercession

All these reasons explain why Niels and I were taken aback by the intensity around the tomb of St Francis. He seems almost more overwhelmed than me.

“They are worshiping him like a god,” he says. “St Francis would be horrified.”

I strongly agree with him. The Saint was a humble man who stood for worshipping God in the simplest way.

“All these images of saints and the way the Catholics revere them is almost like idol worship.” – Niels.

“It can be that,” – me. “The thing is that the Catholics revere Christ to such a degree that they feel they cannot always approach Him directly for everything. So, they ask saints to intercede. It’s not that they worship the Saints.” At least that is what I remember from Ma’s explanations many years ago.

We wander back through town, replenishing our provisions for the road.

I ask myself, why is there so much art in Catholic churches? In comparison, the Dutch Reformed Church in which I grew up and the Methodist Church which I currently attend, are very bare and boring.

Yet the religious theme is one of the mainstays of medieval art. There are many possible reasons. The church and powerful nobility had vested interests. Many people were illiterate. Not only that, but the Bible was also forbidden literature to anyone other than the clergy. Yet the story had to be told. That is why I think there are so many paintings in especially the old Catholic churches. 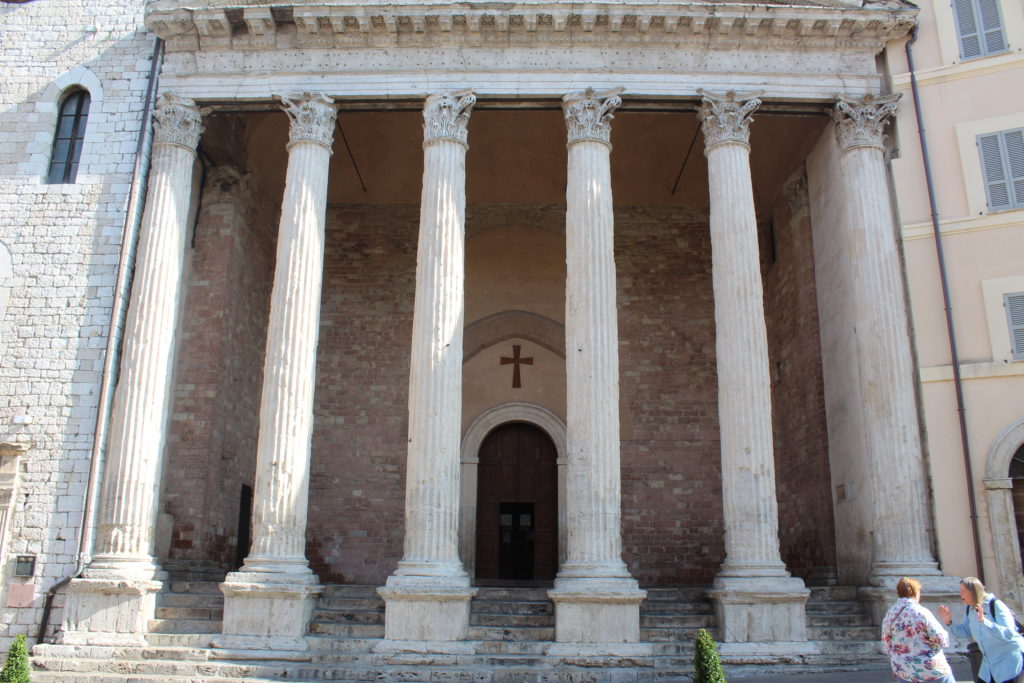 The entrance to the church of Santa Maria Sopra Minerva with its Corinthian columns. (Photo: © Henri Craemer)

As I wander through old Assisi I come upon the church of Santa Maria Sopra Minerva. It’s a church dedicated to St Mary converted from a Roman temple dedicated to Minerva. Converting a pagan temple into a Catholic church may consciously have been done for purely practical reasons: it has stood the test of time due to its structure, built by good Roman engineers. However, there are other consequences. The intention may have been to reshape Paganism into Christianity. Unintentionally it ensured the preservation of the pagan past.

I’m not offended by these methods. Any form of worship of God has validity. It’s not for me to judge.

We leave well in time before the Mass starts. Seats may be at a premium, and this could be like Santiago where we won’t even get into the church if you’re not there early. The result is we can pick our pew.

Niels and I sit silently waiting for proceedings to begin. People start filing into the church. Three priests in bright green robes and nuns in grey drift in and out, arranging the necessary. There are a few whispers with the sound of shuffling feet and people taking their seats. 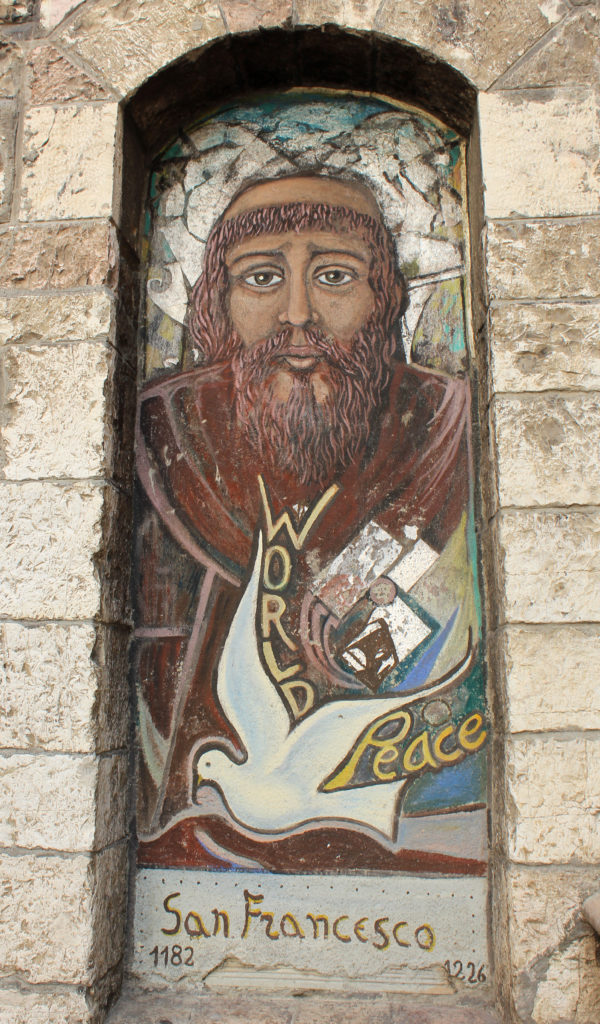 I am filling with anticipation and yet, I also feel a bit apprehensive. I am an outsider. What am I even doing here? Why am I doing this pilgrimage? It almost feels as if I have less of an idea than when I started the walk on the Way of St Francis. All I can do is be in the moment.

The three priests enter a full church. The Mass starts. Niels and I stand, sit, and kneel with the others. I’m clueless as to why. People chime in with responses to what the priest says. I comprehend a few universal words.

Then comes the pilgrims welcome. I only know this because I hear the word “peligrini” – pilgrims – used by the priest. I’m taken by surprise as he says, “Henri Craemer, Sudafrica, Firenze, Assisi,” which he follows with the names of each of the other pilgrims who arrived that day. Niels represents Australia. There are two from Ethiopia and two from Germany. I am overcome by a strange feeling. I feel both honoured and humbled at the recognition for being a pilgrim.

As non-Catholics, we don’t partake of the mass. Yet, as Christians, we are all part of the body of Christ.

The whole church service is over in 40 minutes.

We leave and find a place to eat. We have wild boar’s meat – a must have when you’re in Italy according to Niels – with pappardelle. Like all the other Italian foods we’ve had on this trip, it is delicious.