Henri Craemer | Another Friday Night in Italy
A Friday evening in Rieti with some reflections on what the city has to offer, St Francis and his death, and encounters while we are in Rieti according to Henri Craemer’s account.
Rieti, Italian, gypsy, Sandy Brown, history, Sabine region, Sabine, St Francis, Psalm 142, Bible
16562
post-template-default,single,single-post,postid-16562,single-format-standard,qode-quick-links-1.0,ajax_fade,page_not_loaded,,qode-theme-ver-11.0,qode-theme-bridge,wpb-js-composer js-comp-ver-5.1,vc_responsive 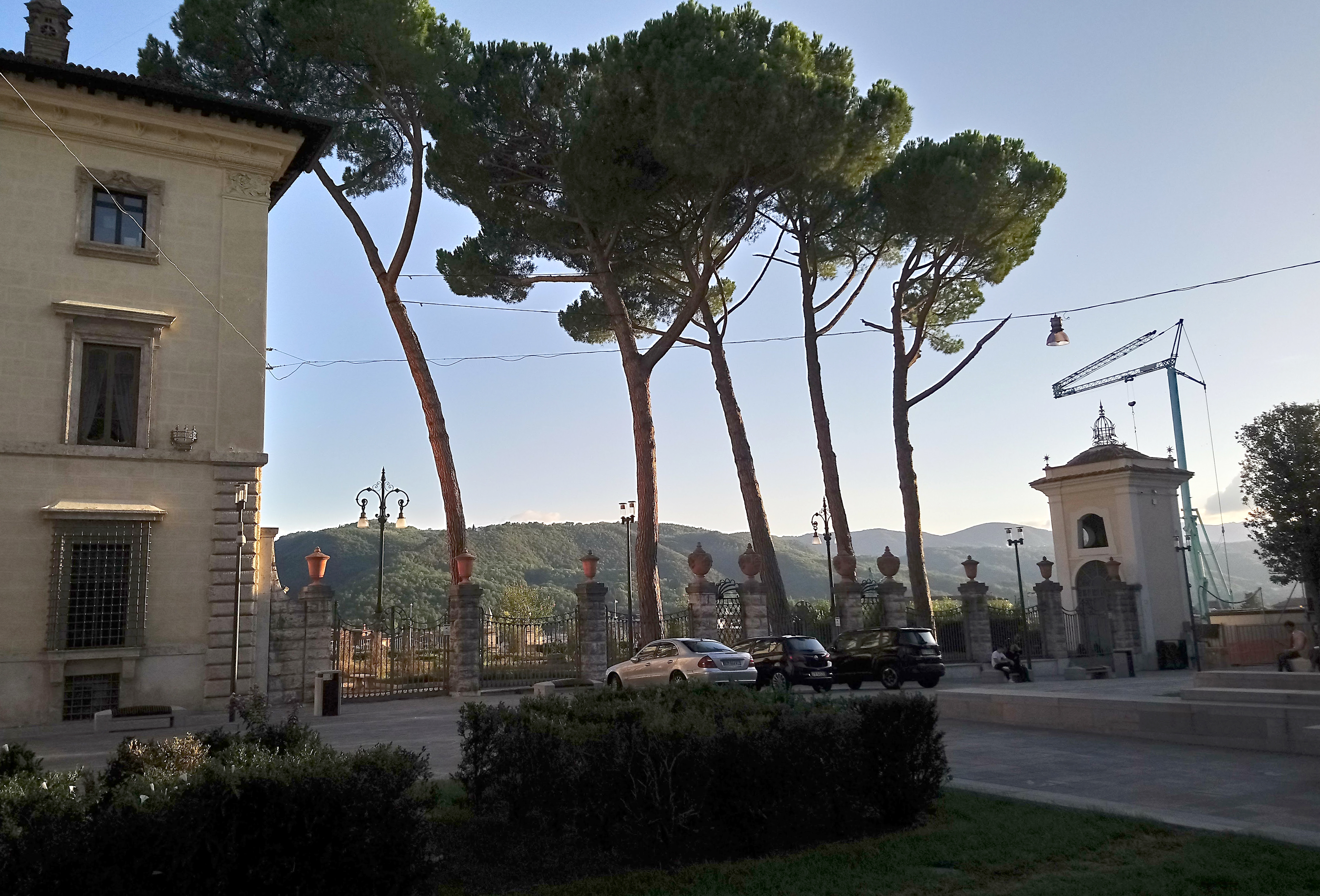 06 Jul Another Friday Night in Italy

It’s after 18:00 on 15 September 2017 in Rieti. Twilight softens the lines of the city. Many Italians are out shopping and walking their dogs. It’s late enough to consider having supper.

We stop in at a café on Piazza Cesare Battisti. There are many Italian students just having a good time. They have a wonderful air of freedom about them that makes me feel nostalgic for my own student days. Half of them are playing cards, some whooping with joy after playing a winning hand. I can’t help but notice how the girls have turned wearing glasses into a fashion statement. Even in casual wear they look elegant. Just about everybody smokes. The smoke is so bad that it affects my chest. 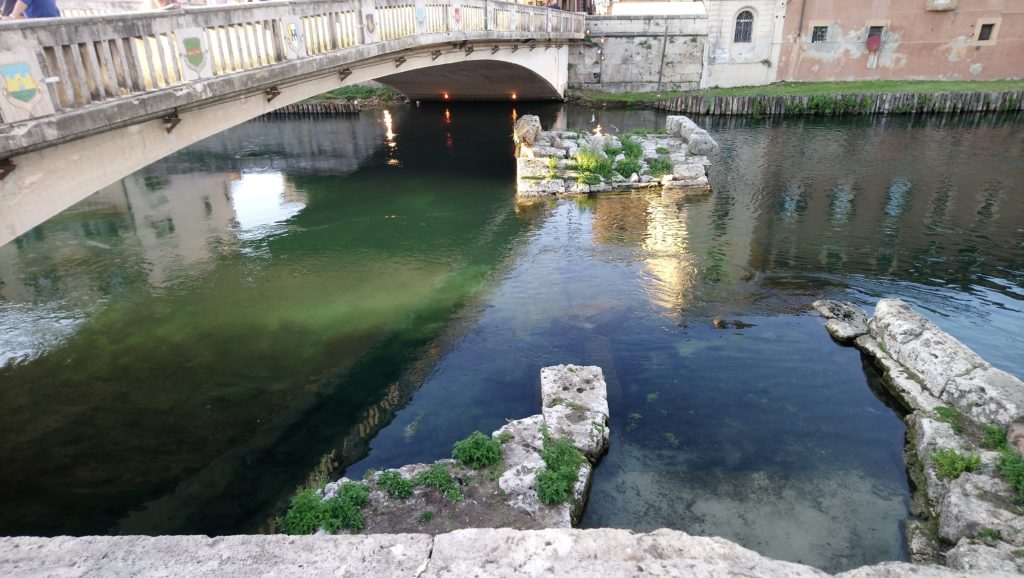 Ponta Romano with the remains of the original Roman bridge next to the one currently in use. (Photo: © Henri Craemer)

We decide to rather have some pizza alfresco at a place close to the hotel. The very friendly teenage waiter gets our order wrong, probably because he’s high.

While waiting for our order, we are accosted by an old gypsy woman who simply walks into the restaurant space. Niels tells me to ignore her.

“They want money not food,” he says after she left. Other tourists gave her a slice of their pizza. “All she’ll do is throw away the food around the corner.” What can I say?… He’s a hard-assed well-travelled Australian who won’t take any nonsense.

We’re hardly back in our hotel room when the phone next to my bed rings. We look at it in surprise. My immediate instinct is to expect bad news. I answer it very hesitatingly. It is reception. My surprise grows bigger when he asks to speak to me by name.

They have my tripod! I ask how this is possible. I specifically left it at Hotel Tizzi in Poggio Bustone. The owner had it couriered to me.

I honestly did not think this would happen. Clearly, I underestimated the caring concern of the Italian Mamma who runs Hotel Tizzi. She must have thought I forgot it there. I should have told her that I left it there on purpose.

Reading Mr. Brown’s info on Rieti I realise that there is much in this town that I’ve missed. We didn’t go into the Duomo of Santa Maria Assunta, the Chiesa di San Francesco with its frescoes by the school of Giotto, or Underground Rieti to see part of the city’s ancient Roman heritage. 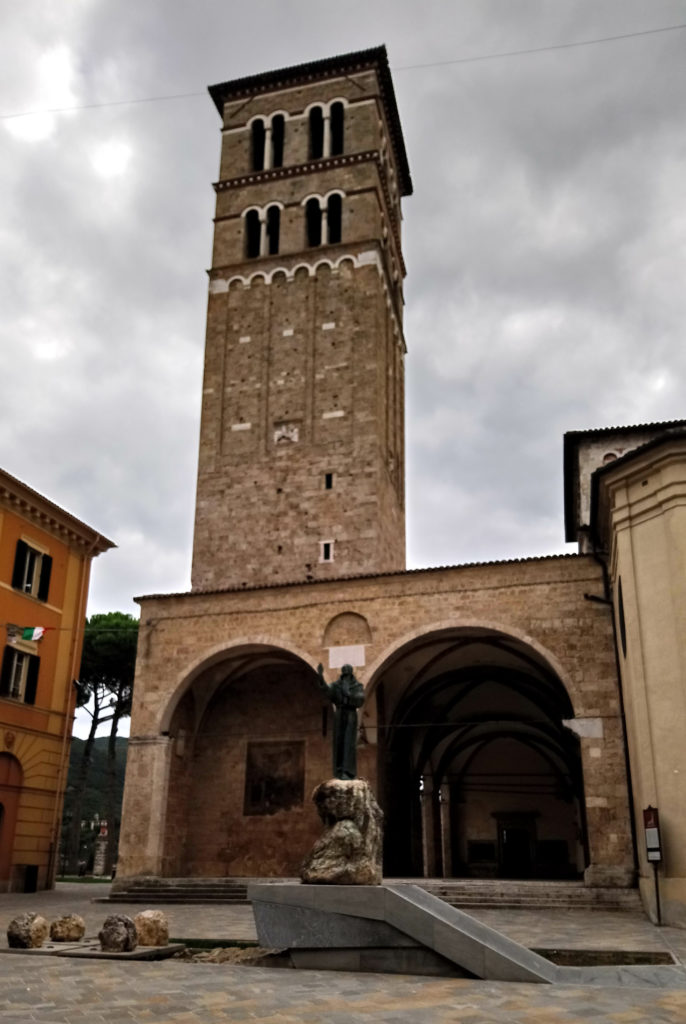 Rieti has many attractions, with a long and ancient history, dating back many centuries BC. Considering parts of it, I don’t think it’s a particularly happy place. During Roman times the Sabine region was enslaved, and soldiers simply took the women for their own purposes – sexual and other. The rape of the Sabine women is a common theme in Renaissance art. In the 1100s AD Rieti was sacked by the Saracens.

Ultimately time is against us to really get to know any place in depth. It’s a pity we can’t stay here for a day of rest. Our previous rest day was in Assisi more than a week ago. I can do with some recovery time. The niggle in my groin was noticeable today, although the cut in my toe pushed it to the background.

Checking up on St Francis

My uncertainty as to where St Francis died bothers me. Reading the information on Rieti, I see no mention of him dying in here. My question is, what happened to him after the eye surgery?

But where to begin? I know his tomb is in the Basilica di San Francesco in Assisi. So, I check Sandy Brown’s info on Stage 15 The Way of St Francis that ends in Assisi. There I find the necessary info. He died in the Porzuincola, currently a tiny chapel inside the Chruch of Santa Maria degli Angeli. He was surrounded by followers.

My curiosity makes me google a bit more about the death of St Francis. He died on 3 October 1226. The last words he uttered were as he sang Psalm 142.

I wonder why I didn’t pay more attention to this when I was in Assisi. I think it happened because to me anyone’s life is much more important than the details of their death.

The fifth and the last verses of Psalm 142* strike me as particularly poignant:

I cry to you, O Lord;
I say, “You are my refuge,
my portion in the land
of the living.”

Set me free from my prison,
that I may praise your name.
Then the righteous will gather about me
because of your goodness to me.

Perhaps how one dies is important. I don’t regard myself as particularly well read on the history of St Francis. Was he suffering intensely, or had the pain already left him, as it sometimes does just before one dies? Psalm 142 is not only a cry for release. It is also an acknowledgment of God as a refuge beyond the troubles of life. It ends with a need to praise God for his goodness. This Psalm, to me, shows St Francis’ acceptance of his inevitable passing, and his deep certainty that he will be with God.

We decide to turn in for the night at our usual time. Downstairs the revelry is going great guns and getting louder. Just like a week ago in Foligno the noise is incredible. That means no sleep until about 03:00. Yet somehow, I drift into that mental nowhere of being neither asleep nor awake. At one stage a fight breaks out to make me fully awake. Even for the noisiest Italians, this sounds bad. It sounds like furniture is smashed. I’m convinced someone is either very seriously injured or possibly killed.

Eventually, things go quiet and we manage to get a few hours of good sleep. Tomorrow is a significant day, if for no other reason than starting the last phase of the trek to Rome.

*Extracts from Psalm 142 as taken from the NIV of the Bible. There is a beautiful rendition of Psalm 142 on YouTube by Jason Silver. I am certain that the versions I refer to here are different to are different to what St Francis sang. However, the basic idea would be the same.